10 Augmented Reality Applications to Watch in 2018

Interactive product catalogues, holographic monsters and learning aids for medical students. Take a look at some Augmented Reality apps worth your while.


Holo looks like something that will be copied by Facebook Messenger sooner or later. A way to include branded content, such as Spider-Man, into user-generated content that will be shared freely to the user’s friends? This is the next level of stickers, and people love them.

There are many AR apps that put something virtual on your phone’s screen. Glasses lacks this sort of a functionality. Instead, it does something a bit more useful: it measures your face so you know exactly which glasses from Warby Parker’s product range will be best for you.

If you have a story to tell with your product, you can tell it with an AR app. Like makers of The Patron tequila, who made a virtual tour around their factory, with an equally virtual bartender talking about their drinks.

It is weird to write something like “imagine that you can see a virtual object in front of you and you can look at it from every angle to see how it works”, when we are living in 2018 and we alreadyhave something like JigSpace. The app’s creators made detailed 3D models of many things, for example household appliances, that you can watch from every possible angle. You can peek inside and learn where the hot water runs or which cable does what. It is easy to imagine manuals made with this level of details.


Are chats, chatbots, or phones not enough for your customers to solve problems? Chalk tries to solve these problems through a videochat with an added AR layer. A user points their camera at something that does not work, for example a TV remote, and a consultant can show the user what they should press or change by drawing arrows or lines on their screen. Visual and simple. This could be either very helpful, or full of videos from bad angles and with terrible lighting.


We’ve come full circle. From video game adaptations of board games, to board games based on videogames to video games that want you to act as if you were playing board games. Smash Tanks is a cute hand-to-hand battle of small tanks, free of the risk that a parent will stomp on a plastic toy.


Some people need extra motivation to stick to their exercise regime. AR Runner augments your running by making a game out of it. Why do the same route everyday, when you can run through checkpoints or race against a virtual rival? Looking at your screen while running is far from optimal, so, hopefully, this idea will come back when smart glasses finally get some traction.

There are a lot of apps that help you visualise what furniture will look like in your apartment. IKEA already has long history of AR functionalities in their Catalog App, and Place is the next step in IKEA’s AR development. If anyone can make it easier for people to find a product and buy it, it’s IKEA.

Complete Anatomy is not there yet, but I’m sure there is room for an app that scans a body and shows its different layers with a virtual skeleton, blood veins, and so on. As of now,  Complete Anatomy presents detailed models of vital organs, bones, etc. It could be a great educational app for kids or even medical students

When I was a kid, I spent hours on “reading” LEGO’s paper catalogues, imagining what it would be like to own every set possible. That was the 20th century. In the 21st century. we have an app for that. With flying dragons, moving cars, and police sirens. A user can choose a product from the LEGO catalogue and see what it would look like on their desk or carpet. Users can’t build their own creations, but they can play around a little to see how the app works. This is the stuff Philip K. Dick wrote about.


So far most, the successful AR app to this date was Pokemon GO by Niantic Labs, where the Pokemon-fueled nostalgia was more important than the AR functionality. Many players didn’t even use their camera to play. And this is the main problem –  in most cases, a smartphone’s screen is too small for an AR functionality to be more than just a nice visual gimmick. It is hard to navigate and see any details. But this is all we have until we finally get Star-Trek-like holograms, so let’s have fun with we have. 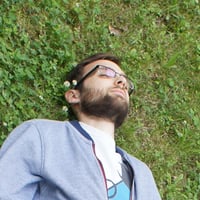