10 Things about Android Oreo that You Should Know

And the day has come when Oreo is no longer only our favourite cookie.

A few days ago, a new version of the Android operating system was released under a sweet name: Oreo. What does it mean for the owners of Android apps? What are the opportunities that Android Oreo creates for businesses? Take a look at our list of essential information that Android mobile apps owners should know about the new system.

No More Speculations. Here It Is, Sweeter Than Ever: Android Oreo!

On 21/08/2017 people in the USA had occasion to watch the amazing total eclipse and attend an event in New York on which the new Android name was announced. Google follows their Android version naming tradition, so we knew Android 8.0 was going to be named after the sweet treat starting with an ‘O’ letter.

Android O continues to improve battery life, and it’s done by changing the behaviour of background services. Although the new restrictions do not apply to old apps by default, a user can force the new behaviour manually from the settings, which could cause problems in the legacy apps. Google provides developers with possible replacements like JobScheduler.

This change can affect your app if you use location services in the background even on the old version of your app. From now on, background location updates should happen less often to ensure better battery life.

Apps can now define notification channels which are visible to users as categories. Thanks to that, we can define connected groups of notifications that our apps create and allow users more fine-grained control over them.

Multi-window mode on Android was a great feature allowing easier multitasking for users, and the time has come for the next step. The new update allows creating apps which can use the picture-in-picture feature. What does it mean? Your apps can now create windows floating over other apps, which could be a prominent feature for apps that provide a video chat functionality.

Instant Apps allows users to run apps without even installing them - sounds great, doesn't it?

New Android release tries to tackle the problem of different system’s UIs available across different devices. The new icon format allows creating icons that can adapt to given UI scheme but with grander possibilities. You can learn more in the outstanding series of articles written by Google designer, Nick Butcher: 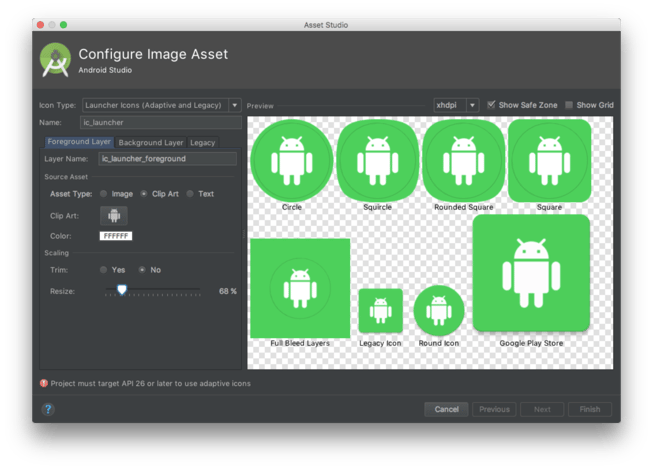 Since there is never enough of them, the new Android comes with over 60 new emojis, but the old set was also redesigned.

9. Tooltips - When Icon Is Not Enough

Tooltip is a small message that can appear near view while pressing or hovering his mouse over it. It might come in handy in situations where an icon is not descriptive enough.

Soon! Google should be shortly enrolling OTA updates for their devices including Nexus 5X, Nexus 6P, Nexus Player, Pixel, Pixel XL and Pixel C. If you can’t wait or want to test your app on a physical device with the new system, you might try to enrol to beta program or flash available images yourself. If you aren’t lucky enough to have a Google device, you might need to wait for the announcements of your device’s manufacturer.

Summing up, the new Android release might not be revolutionary as Google's mobile system gets more mature and there is less to do, but - surely - it’s a step in the right way. You should definitely check your app compatibility with the new system as the introduced changes might influence its behaviour resulting in crashes or broken features.

If you want to learn more about behaviour changes, new APIs or prepare for migration, you might want to check the introduction to Android 8.0.