Adobe: from traditional software to the cloud

Photoshop, Lightroom, Premiere, Flash or Acrobat Reader - these are some of the most popular programs made by Adobe. For many years they were distributed in the traditional way. All over the world shops offered boxes with DVDs and license keys.

Things started to change rapidly in the early 2010s. Adobe announced Creative Cloud in October 2011 and moved their entire product base online in 2013. Creative Cloud offers a set of applications that gives subscribers access to a collection of their software, mobile applications, and cloud services. The software of Adobe is now available only from the cloud.

Just before the original launch of CC in 2013, Adobe had an install base of 12.8 million customers using different versions of the older CS tools. That base had been built up over a decade. At the end of 2017, Adobe had approximately 12 million subscribers to its CC services. A year later the number increased to around 15 million subscribers. New Creative Cloud products have achieved a similar number of users in just a few years. Their growth is steady and fast, which is very impressive.

For many photographers or graphic designers, the subscription-based model is a blessing. It's more affordable to pay 19 dollars a month than, for example, 1000 dollars upfront. From the business point of view, Adobe's bold and proactive move truly paid off. According to a recent report, in its fourth quarter of the fiscal year 2018, Adobe achieved record quarterly revenue of $2.46 billion. This represents 23 percent year-over-year growth. In the fiscal year 2018, Adobe achieved record annual revenue of $9.03 billion, which represents 24 percent year-over-year growth.

What’s more, previously many of Adobe’s core product users didn't pay for the software. Their products were among the most frequently pirated software in the world. The problem was solved when all of their products were moved to the cloud, and all their functionality is hosted and controlled online.

Starbucks is well-known for their roasted coffee. But it's also a bright example of a successful, effective digital transformation. How it is possible to connect coffee and digital data? 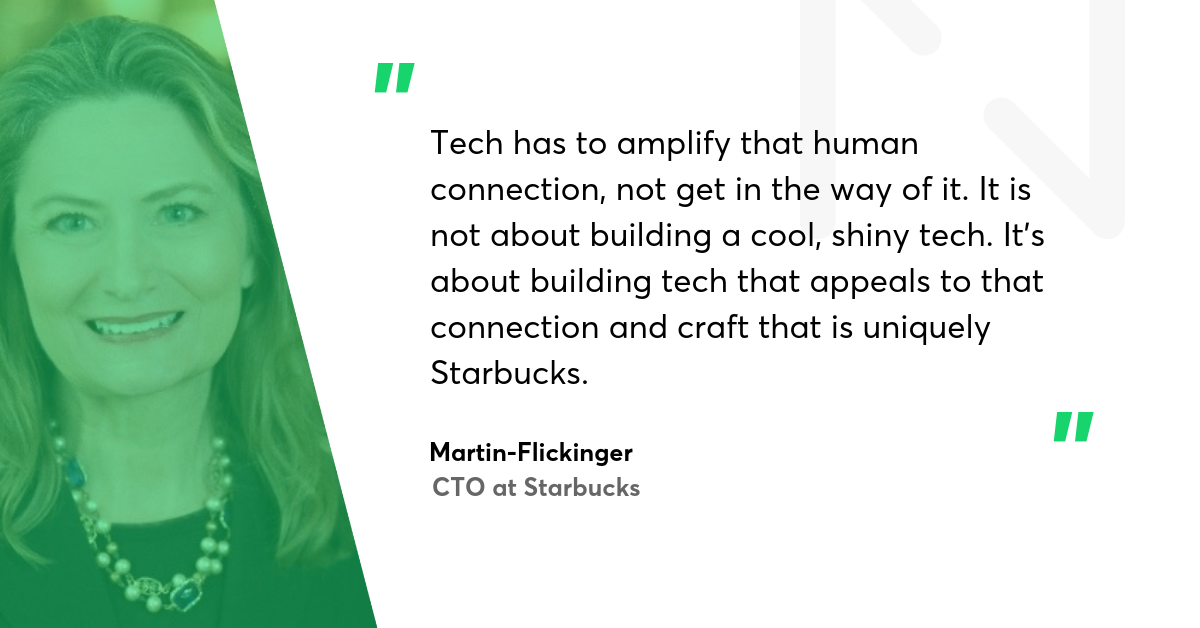 Starbucks’ customers generate 90 million transactions a week, in almost 25,000 stores worldwide. Over the last couple of years, Starbucks started to accumulate and analyze this huge amount of data. They are now incorporating data analytics into their marketing and sales efforts.

"Starbucks is an experience. And it’s centered around that customer connection in the store, the human connection, one person, one cup, one neighborhood at a time. I think that mission is so critical to how technology has to show up for us. Tech has to amplify that human connection, not get in the way of it. It is not about building a cool, shiny tech. It’s about building tech that appeals to that connection and craft that is uniquely Starbucks" - said Gerri Martin-Flickinger, Starbucks CTO.

The most important part of that process is a mobile application and the Starbucks Rewards program. Their app allows for quick and easy payments. The loyalty program rewards users and offers some additional features like a store locator and music recommendations.

Their “Digital Flywheel” is focused on four pillars: rewards, personalization, payment, and order. It's a good example of a customer-first strategy. The app, together with a large loyalty program, addresses the basic customer needs: convenience and line avoidance.

Starbucks has more than 14 million people signed up for its Starbucks Rewards loyalty program. In 2017, rewards represented the 36% of U.S. company-operated sales last year. Mobile payment was 30 percent of transactions. In comparison, only 5.5% of Apple users use Apple Pay.

Starbucks has tons of data about their clients. They can see what coffees their customers are ordering and adjust their offerings accordingly. They can personalize offers and marketing materials. Finally, they can help to increase sales and cut costs of ineffective ads and marketing.

The legendary New York Times: from print to online

Digital has been killing the traditional media industry for more than 18 years now. One forecast says that digital newspaper revenue is estimated to grow by 9.8% annually from 2015 to 2020. In the same period of time, non-digital media is set to decline an annual 3%. The legendary New York Times found their own way to survive and grow in the digital disruption times.

The New York Times’ effective digital transformation helped them to endure the digital storm. What's more, it helped them gain an advantage over their competitors and grow. The company recognized early that their readers were migrating to the Internet and shifted their focus.

In 2013, the New York Times started to implement a paywall and subscription model for their online content. They can still deliver high-quality journalism while continuing to earn revenue. The newspaper's content decisions are not based on advertisers’ demands. The result of this digital transformation is impressive. In 2017, the company had more than 1 billion dollars in revenue from subscriptions alone. The total revenue for the year increased by 8%, to 1.7 billion dollars.

Can I make digital transformation work for my business?

The International Data Corporation (IDC) estimates that 40% of all technology spending will go toward digital transformation strategy in the next few years. Enterprises will be spending over $2 trillion by 2019.

Digital transformation affects every business in every industry. At Netguru, we understand that it can be a great opportunity for your business to grown, increase revenue, and cut costs. Drop us a message and let us show you how can we help your company.