According to the Bureau of Labor Statistics, the projected employment of software developers is over 4 times bigger than that of other occupations. In the current talent shortage scenario, companies are doing their best to attract and retain software developers. What does this mean for you, the candidate?

We’ve looked at the industry research from Stack Overflow, Dice, and Devskiller to show you the real state of developer hiring. In this article, we’re presenting some of the most interesting insights for technical candidates based on their reports. This data shows you how your peers feel about their current jobs, which programming languagues they value most, and what actions they typically take when making a job change.

See how you compare to global benchmarks!

As a professional group, developers tend to change jobs frequently. The Stack Overflow study results show that more than 50% of developers report having changed jobs in the last 2 years. Unsurprisingly, this year is no different. The findings of the 2019 Dice Tech Salary Report suggest that a massive 45% of tech professionals anticipate changing jobs in 2019.

Some of the most common reasons for changing employers include:

Looking at this data, it is obvious that in tech, salary is the biggest sentiment trumping other satisfaction factors. That said, it’s not the only one. Developers also value training and certification opportunities, remote work/flex hours options, stock programs, 401 (k) matching, and paid sick time. This puts you in a great position as a candidate because it means you can find a workplace which anticipates your need.

When considering new job opportunities, make sure to look for the signs of great company culture. It can manifest itself through culture books, well-designed career pages, and profiles in industry-specific sites like Stack Overflow and Just Join IT, among other things.

2. Developers are generally more satisfied with their careers than their jobs

Given that the majority of businesses now need developers in order to achieve growth, it comes as no surprise that over 90% of developers are currently employed at least part-time. That said, approximately a quarter of them are “dissatisfied” or “neither satisfied nor dissatisfied” with their jobs. Interestingly, developers seem more satisfied with their careers than their current jobs.

What does this mean for you? The fact that most of your peers are currently employed gives you more freedom to find a job you really like. Recruiters use different techniques to attract passive candidates (meaning those who are currently employed). Due to the high demand for tech skills, they are typically more receptive to your needs than to those of other professional groups. That’s because they simply want to hire you before their competitors do.

3. 73% of developers take a coding test for recruitment purposes

According to the Devskiller Global Technical Hiring & Skills Report 2019, 73% of developers take a coding test sent to them by the prospective employer for recruitment purposes. Of these, 92% of candidates finish and submit the coding test. This suggests that contrary to popular belief, as a professional group, you’re not opposed to coding tests as long as these tests are objective and focused on your coding skills.

Most technical candidates are not fans of whiteboard interviews and some even refer to them as “whiteboard hazing”. In whiteboard interviews, you’re typically asked to recite algorithms, invert binary trees on whiteboards, or asked puzzles which have nothing to do with your abilities. However, when faced with real coding tasks and a reasonable timeframe to solve them, most of your peers are willing to take the time it takes to complete the assessment.

Interestingly, the test completion rate is higher for some countries, including Latvia, Armenia, Denmark, New Zealand, and the UK. 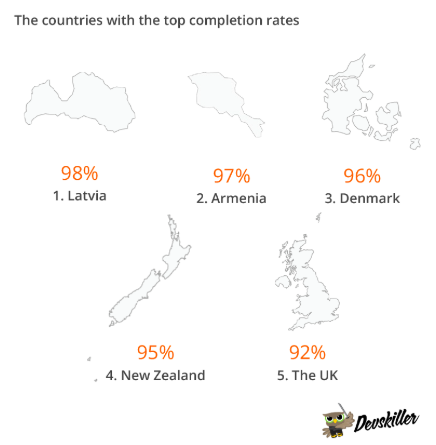 When considering a job change, how do you spot a promising tech employer? There are a couple of things to look out for, but the way a company recruits already tells you a lot. Most technologically advanced companies have a multi-tier recruitment process. It typically involves some type of technical screening based on a work-sample, followed by technical interviews and/or pair programming. A well-designed recruitment process provides both the candidate and the company with valuable insights about the prospective employment. This means that as a candidate, you get a good idea of what it’s like to work for them.

On average, developers need 2.88 days to submit a coding test solution to the prospective employer. Tests sent on Tuesdays typically get the fastest response, and those sent on Wednesdays tend to take the longest.

What does this mean for the candidates? If you’re really interested in a job opportunity, make sure to send the solved test in a timely manner. Do your best to stick to the deadline you’ve agreed to and if that’s impossible, reach out and ask for the deadline to be changed.

5. Over half of the developers identify as back-end developers

According to Stack Overflow, JavaScript is the most commonly used language, for the sixth year in a row. That said, Python continues to rise in the ranking.

Interestingly, Python is the #1 most wanted language, meaning that it is “the language that developers who do not yet use it most often say they want to learn”.

This data shows you both which skills are seen as attractive by both the employers and the developers.

7. Most developers get database skills to check

According to Devskiller data, regardless of their level of seniority and the field of expertise, the majority of developers will get their database skills assessed as a part of the recruitment process. This shows the significance of database skills in the eyes of the prospective employer. From the perspective of the candidate, it shows that brushing up on your database skills is a surefire way to make your skillset more desirable. 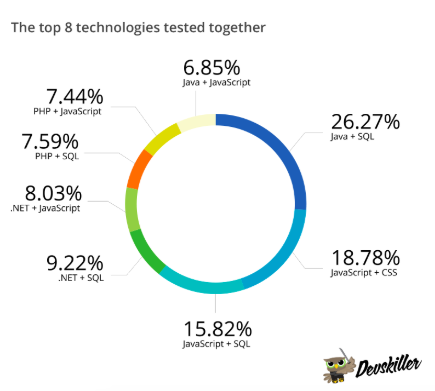 The ever-growing demand for technical skills puts you in a very favorable position when it comes to looking for a job. Overall, your peers are happier with their carriers than they are with their current jobs. This results in frequent job changes in the IT sector. Given that it takes on average 43 days to hire a developer, tech recruiters are doing their best to attract and retain developers.

At Netguru, we help innovators and entrepreneurs shape the world through beautiful software. To do that, we need skilled and engaged employees who understand our core values and collaborate seamlessly to reach our goal. To attract and retain our workforce, we communicate our culture, values, and story in the Netguru Culture Book. We’re always hiring, so take a look at our open positions!