7 Reasons Why You Should Go for Native App Development

These days, if you have a business idea, it’s very likely that it involves developing an app. No wonder, as apps outpace websites in many areas, like personalization, notifications, speed and potential features... just to name a few.

However, betting on any type of application development is just the beginning. The real decision-making process starts when you have to choose the most suitable platforms and technologies for your project. There are a few basic things you need to think about in advance:

Having answered all these questions, it will now be easier for you to select the most adequate solution.

Web & hybrid apps - all you need to know

Before we move on to native app development, let’s take a look at the pros and cons of the two other options that you have.

To put it simply, web-based apps run in your browser. They are usually written in HTML, CSS and JavaScript, which makes them platform-independent. All you need to run them is an Internet connection and a supported browser, where you just enter the app URL. They’re perfect for user interfaces (UIs) that require huge amounts of space to display big data sets, which can then also be shown on large TV screens.

On the other hand, it’s a big hassle to adjust web apps for smaller screens - and then they still cannot access any hardware features, like the gyroscope or Bluetooth. So every time a user wants to use the app, they would need to open the browser and type in the address. Plus, every operating system has different UI components, so it wouldn’t look nor feel like a native app.

Hybrid apps combine elements of both web and native apps. You can think of them as web applications - written in HTML, CSS and JS - delivered in native app environments. This means that they can be downloaded from official platform stores and then installed and used like any other app. It’s a cross-platform solution that can partially benefit from some hardware features but...

...not all of them. Hybrid apps are also heavily dependent on third-party frameworks - which are rarely updated and often contain security holes. It’s hard to create a native-feeling experience, and their performance is significantly lower compared to that of native apps.

Native app development - 7 reasons you should go for it

Native apps are applications that are written in languages specific to the operating systems that they are developed for - primarily, this has been Java for Android and Objective-C for iOS. However, due to extensive platform development, nowadays these languages are being replaced by Kotlin (Android) and Swift (iOS). These kinds of applications are truly tailor-made to specific systems, so you can fully benefit from all of their features and easily integrate with the entire ecosystem (like Google/Android Pay, Siri or voice navigation).

If you want to provide the best user experience possible in terms of the look and feel of your application, then native app development may be a good option for you. Why? Because when an app closely follows the guidelines for popular platforms, users are quick to become familiar with how to use it. But there are also plenty of other reasons that may be even more convincing for you:

Native apps run much faster than non-native apps because they are written in languages that are fully supported by the platform’s ecosystems. They tend to run more smoothly, too, as they have access to exclusive APIs and components which are optimized for different screen sizes and system versions.

While most hybrid apps (written in such frameworks as Ionic or Cordova) rely only on system browser security, native and cross-platform apps (React Native or Flutter) are protected by many different layers of an operating system, which makes them difficult to exploit. They also don’t depend on any third-party frameworks, using only official APIs which have been deeply tested across various system versions. Due to the long development of official platform SDKs, it’s more likely that they can eliminate every emerging security issue. Finally, official platform releases also occur less frequently than framework releases. With longer release cycles you can expect more secure, well-tested, and reliable software. Shorter release cycles, due to lack of time, can be less thoroughly prepared with the option of getting fixed later.

There are a lot of experienced programmers focused on native app development. Having many years of invaluable experience, they know the Android and iOS systems inside out. This makes them capable of solving various types of problems associated with implementing non-standard behaviour, views or animations. They can also advise you when it comes to technical, UX and UI solutions - to help you deliver the best product possible that is also tailored to the platform.

Native projects are faster to configure because they must be compatible with only one platform. Even if there are two native projects, they are completely separate, so you do not have to worry about the compatibility of app dependencies between versions for different platforms (Android, iOS) and you can freely use any new features on a given platform. The less restrictions there are, the easier it is to scale.

But if you want to combine the benefits of both cross-platform and native solutions, you may want to start natively, and then extend some of the smaller modules of the app with additional cross-platform code. This is a safe strategy used by some of the biggest players on the market, like Facebook and AirBnB.

Native applications can take full advantage of all the hardware features of a mobile device. Moreover, their implementation is quick and easy thanks to the exclusive APIs offered by the Google and Apple operating systems.

Android and iOS are flagship products of Google and Apple, respectively. It’s highly unlikely that they will suddenly drop support for these projects. What does this mean for native apps? Being fully supported by platforms from these tech giants means that they are definitely much more stable in terms of both maintenance and development. In comparison, cross-platform frameworks are developed by third-party companies that often don’t even turn a profit from them. So, it is easier for those companies to stop supporting or slow down the framework development.

Besides, when developing a hybrid app, you have to delay the implementation of any new system features until the creators of the framework add support for it. And… this can take weeks (or more). In native apps, system features like application shortcuts or biometric APIs can be implemented straight away, as soon as they are released to devs.

UX/UI is unified within a given platform, so it is already well known by users. The UX patterns recur in other native apps, so people will intuitively know how to move around in your app as well. User experience is also much better because the higher performance allows everything to run smoothly. It is also easier for the creators to follow the imposed standards when designing and developing an app. Put simply, creating native applications supports good UI/UX patterns for a given platform. In addition, you can develop platform-specific features directly within a native app, like integration with Google Pay or Siri.

Now that you know the reasons why building a native app is so appealing, it’s time to look at some hard proof of its capabilities.

Mobile app development - with its native division at the helm - is a trending topic among both developers and business owners because of certain applications which have made a really huge splash among users. Here are some of the most interesting ones:

This is one of the most popular swipe keyboards designed for both Android and iOS. SwiftKey was developed as a native app because its functionality differs on each platform. Thanks to this approach, SwiftKey is fast and provides many different platform-tailored features.

This ride-sharing application which handles over 15 million trips each day was written natively. It provides a distinct user experience on each platform. For example, it has a 2D interface for Android and a 3D one for iOS in order to avoid affecting the performance and user base of either operating system.

Finding inspiration via Pinterest can be a slightly different experience depending on the platform that you use. Native Pinterest apps are reliable and function at the speed of light.

Helpr provides parents with pre-screened and affordable backup childcare. Thanks to native iOS and Android apps you can book a sitter with just 3 hours’ notice. You can read more about our fantastic development here.

We built an app for a personal assistant robot that received a warm round of applause from testers, experts, and media outlets across Europe and the US. And we worked on three native apps simultaneously: the robot’s Android-based operating system, an iOS app, and a mobile Android app. Learn more about it here.

When the Netguru R&D team decides to combine Augmented Reality and Machine Learning, the effect just has to be exciting! CarLens - a car recognition app - brings back childhood memories and helps you identify cars by using image recognition technology. The app works on both iOS and Android. Find out more about our experimental project here.

Fantastic performance, cost-effectiveness, reliability, and the potential to reach the stars - choosing to go with native app development might sound like hitting the bull’s eye if you’ve already decided to create a mobile app. And the successful examples above provide you with clear evidence that these are not just empty phrases.

If you have a business idea that you’d like to discuss, remember that at Netguru we are not afraid of any challenges or projects that are completely out of the box. Actually, just the opposite - we look forward to them, so don’t hesitate to get in touch. 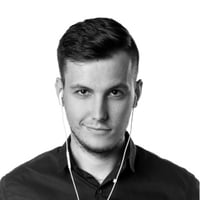