Stanisław Zalewski is a Senior Python Developer, responsible for building high quality Python applications that meet clients’ needs, supporting colleagues with his knowledge and experience, and helping with recruitment to the Python team. He feels right at home here and works towards a promotion to the leader position. He didn’t join Netguru the usual way, but through a merger between Netguru and Bitcraft, Stanisław’s previous company. According to him, the change was fast and smooth, and he’s happy to be where he is today. 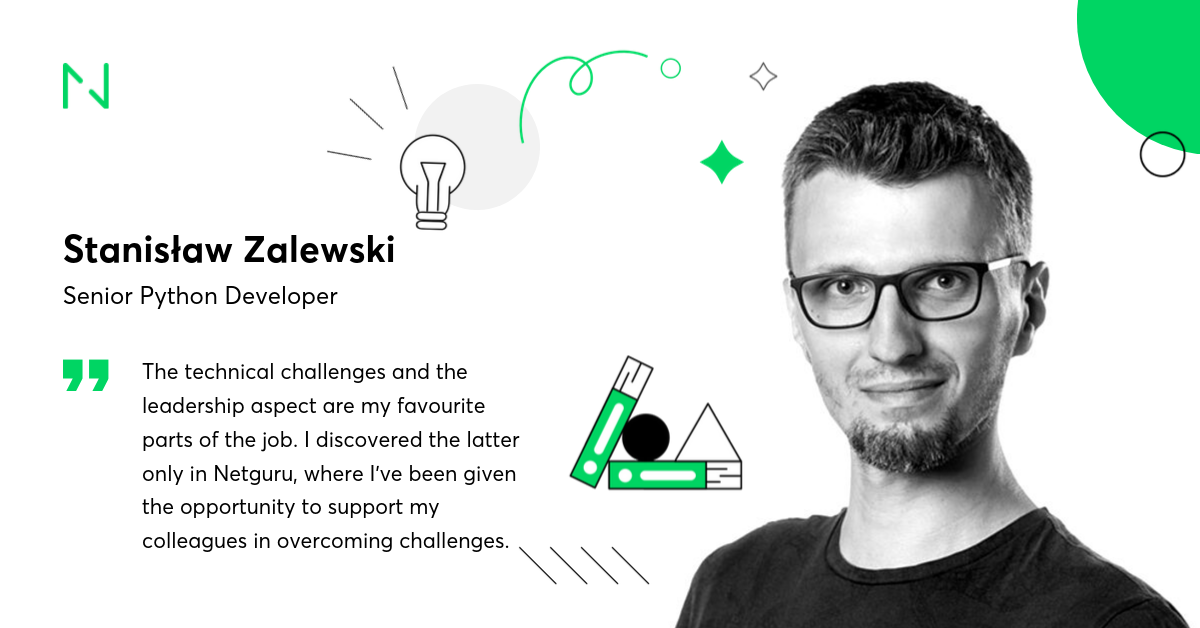 The work of a Senior Python Developer

Stanisław has over eight years of web development experience. He was promoted to a Senior Python Developer last year. “My main task is building apps according to specifications provided by clients,” he says. Sometimes, these specifications are created together with the client during a series of meetings, sometimes they are simply provided at the beginning of the project. Either way, Stanisław and his team work hard to deliver quality code and build apps that truly support clients’ business.

A Senior Developer has other duties, too. Stanisław spends a chunk of his time mentoring new colleagues, or supporting other developers. This can include being the assigned mentor of a new Netguru employee, as well as discussing a roadblock encountered by a project team, and brainstorming ways to overcome it. It can also involve helping define each team member’s responsibilities. Finally, Stanisław supports the HR department by participating in the technical segments of Netguru’s recruitment process, verifying candidates’ knowledge and problem-solving skills.

“The technical challenges and the leadership aspect are my favourite parts of the job,” says Stanisław. “I discovered the latter only in Netguru, where I’ve been given the opportunity to support my colleagues in overcoming challenges.” He finds recruitment satisfying, as well. Verifying candidates is a particularly interesting experience, since throughout most of his career, Stanisław has always been on the other end of the process.

A Senior Python Developer’s work is not without its challenges, either. “The ability to convince other people to go with my ideas is probably the biggest one,” says Stanisław. “There was a project where the client had a set vision for the product, and we were proposing a solution that would be more beneficial. It’s difficult to figure out the rules of sort of interaction. I needed to achieve my goal without stepping on any toes.”

Technical challenges are just as common, especially when you switch one company’s processes and toolkit for those of another company. After the merger, Stanisław had to work with many unfamiliar tools and technologies. “I thought of some of them as too much or unnecessary,” he says. “But in time, I learned to appreciate them, even treat them as must-haves. It’s important on the IT market to always move forward, to not get trapped in a safe bubble of familiar solutions. If you do, you fall behind your peers.”

From dreams of game development to building enterprise web apps

Stanisław’s adventure with software development began in secondary school. He learned Pascal and the basics of HTML. “The natural direction for me was to continue on this path and study IT at university,” he says. Stanisław’s first job was as a Java developer. He then worked with PHP, Python, and Ruby. In the end, web development was the best space for him to grow professionally. But working on web apps for companies wasn’t his original goal.

“My fascination with programming began with computer games of all types: strategies, shooters, action games. My first ambition was to build games, but the market in my area didn’t really support that plan,” Stanisław says. Today, he’s glad that he became a web developer, due to the interesting projects and career option presented by the industry.

The game industry would have provided a very different challenge. Game studios are known for taking advantage of employees’ passion for their work (mostly through crunchtime and extra hours. They are also slaves to the schedules arranged by their marketing departments. Time is of the essence in any project, of course. “I’ve never had a project in which I had too much time. Sometimes I had enough time to do my job well, sometimes a bit too little, but never too much,” says Stanisław. The B2B market, with individual clients and stakeholders, supports somewhat flexible deadlines (though this isn’t always the case for projects with external funding). There’s no marketing department that decides the release schedule. “The products we build at Netguru are smaller-scale in terms of the codebase, too,” says Stanisław. “Mistakes aren’t as costly, and we can adapt to changes in requirements fairly easily.”

Passion is one thing, but a stress-free, healthy lifestyle is nothing to scoff at. “It’s slower and calmer here at Netguru,” says Stanisław. “When I need an extra dose of adrenaline, I train Krav Maga and Defendo. I’ve been doing this for years, and it’s a great way to get rid of stress. Plus it’s a very healthy hobby for someone whose job involves sitting down for hours on end.”

Specialising in Python and joining Netguru

Years ago, when Stanisław started on this career path, the software development industry was very different from what we see today. Back then, a single developer used to be responsible for the backend, frontend and infrastructure. With the rising popularity of JavaScript, the frontend broke off as a separate specialisation. Then, as the backend aspects of development became more independent, the DevOps part turned into a separate job, as well. “I used to spend many, many hours on optimisation, back in the early days,” says Stanisław. “Not so today.”

For many years, Stanisław worked as a PHP developer. He jumped on opportunities to learn new things, and after some time, he had a number of projects in Python and Ruby under his belt. He knew that he wanted a change: to go from specialising in PHP to being a Python dev. An opening at Bitcraft gave him that opportunity.

“Bitcraft had a similar atmosphere to Netguru,” Stanisław recalls. “Young people, friendly environment, similar goals and values.” The merger with Netguru came as a bit of a surprise to Stanisław, who had gone vacationing and learned about the upcoming change on his first day back at work. “Bitcraft employees could individually decide whether they wanted to stay with Netguru. Intuition told us that staying would be the right choice - we just had a good feeling about it,” says Stanisław.

The process was fast and smooth. After a month-long transition period and dealing with the paperwork, those who chose to move to Netguru became members of our team. “Onboarding took two days and we were ready to go. It was a very positive experience,” Stanisław says.

Though working at Netguru is not much different than working at Bitcraft, Stanisław appreciates the change. “I’m really happy with the tech stack and processes built within the company and used in commercial projects,” he says. “They help us provide higher code quality and use our time optimally. There are also no issues with getting a license for a specific programming environment, or an extra tool that will improve productivity or become a safety measure against bugs. As long as I can provide a good reason for why I need a certain tool, I’m very likely to get it.”

Another characteristic of Netguru that Stanisław appreciates is how open to innovation the company is. It’s something he’s been missing at most companies he worked for before Bitcraft. At one of his previous jobs, the bosses forbade the team to use efficient programming environments and automating some processes. They argued that it would lower their reaction time, but the real reason was the quality of the code the team was supporting. A tool like Pycharm wouldn’t have been able to deal with. At another company, all paid tools or services were heavily restricted to reduce costs. Anything that wasn’t absolutely necessary was seen as too expensive. “Arguments such as that we would be able to focus on building the product rather than managing it along the way fell on deaf ears,” Stanisław says.

He didn’t let experiences like that affect his engagement or his drive to continue growing as a professional. Stanisław entered Netguru as a regular Python Developer. He didn’t stay one for long. “The career path towards a senior position was clear and transparent,” he says. “I knew I would have to support colleagues with my knowledge, take part in recruitment, help with project kickoffs (talking to clients, looking for solutions that would serve the project’s needs, thinking from a sales point of view). I would also have to continue improving my programming skills.”

The promotion was automatic. Stanisław put in the effort, and one day, he received the information that he was nominated for the Senior Python Developer position. “Then I just waited, though I had a good idea that I would get the job, knowing how hard I worked for it,” he says. And he was right.

Goals for the future

Stanisław isn’t ready to settle down with his current achievements. “Now my main goal is to become a team leader,” he says. At Netguru, a leader is a senior developer who still builds apps and does everything other senior devs do, only he or she is also responsible for supporting a team, helping them with conflicts resolution and unexpected project developments. If there’s a disagreement between team members or a difficult stakeholder to deal with, it’s the leader’s job to oversee the situation and guide his or her team.

To become a leader, Stanisław needs to improve his soft skills: communication, building interpersonal relations, etc. “I need to work on my English, too, become more fluent and communicative,” he says. “Once I feel ready, I need to apply for the position. Once it’s accepted, internal recruitment will be held for me according to a standardised process. I’ll answer questions confirming my knowledge and skills, and solve a practical task: a scenario where I’ll have to deal with a project crisis. After this process, my application will be graded, and I will receive feedback on my performance.”

At Netguru, feedback is at the core of our work. We use every opportunity to get it, both the praise and the negative comments, followed by suggestions for improvement. “I think this might not be an environment for everyone,” Stanisław says. “Certain people aren’t good at dealing with negative feedback. Often they are experts with profound knowledge but poor interpersonal skills. These people could cause internal tensions in a company like Netguru, where team cohesion is more important than personal accomplishments.”

Netguru is a place open to new talent and anyone who wants to should apply for a job. Even if you fail the first time, you get feedback on what to improve. “People get in on the second try regularly,” says Stanisław. “It’s worth it to spend the time analysing the feedback you get and learn from it. Even if you end up at another company in the end.” Considering Netguru’s fast growth, there will be no lack of job openings here in the foreseeable future. If you’re thinking about joining us, let’s have a chat - we have many people like Stanisław who’d be happy to talk about their experiences and offer advice.

Ola is always on fire. Right after graduating from a law school, she decided to work at Netguru...