How Our Designers and Engineers Got Involved into Improving Kuwait Politics

There's the same problem with democracies all around the world: how to hold the politicians accountable? Promises are made before the elections, and hardly ever kept by politicians in office. Although in theory all activities of members of parliament are accessible, in practice a curious citizen will find it impossible to analyze them. Usually one would have to personally visit the archives, and manually search for the answer.

This is the bleak reality in Poland, just like it is in Kuwait.

Raqib50 was created to change it. The name means in Arabic "Watch50", since there are 50 Members of Parliament in the National Assembly in Kuwait.

The application tracks the parliamentary activities of each MP, and presents it in the form of easy to understand infographics. Voters may follow them, check what they do, and hold them accountable for their acts.

Raqib50 founders built the first version of the application back in 2011 with the help of a Swedish development company. The application was functional, however it was not easy to navigate. Raqib50's code, UX, and design needed some improvements.

This is why the founders decided to look for a new tech partner. They chose Netguru.

How the Emir of Kuwait Tightened Our Deadline

When preparing the application, Raqib50 founders researched similar solutions in several African countries, in the UK, and Sweden. They used the experiences of other countries to design a parliament watch application suitable to the Kuwaiti political system.

Time was a factor. Raqib50 is an online non-profit organization with no sustainable funding. That is why they operate on a limited budget, which meant a tight deadline for Netguru. The application launch date was set for February 2017. One of the reasons was to have it ready before the parliamentary elections set for August 2017.

In a relatively short time, with a small dev team we had to prepare a relaunch of a web application, as well as design and code a brand new mobile application.

To make things even more difficult for Netguru designers and developers, this deadline had to be moved three months ahead, as we fell victim of a small Kuwaiti political crisis. In October 2016 Emir of Kuwait issued a decree to dissolve the country's parliament. Early elections were scheduled for the end of November. 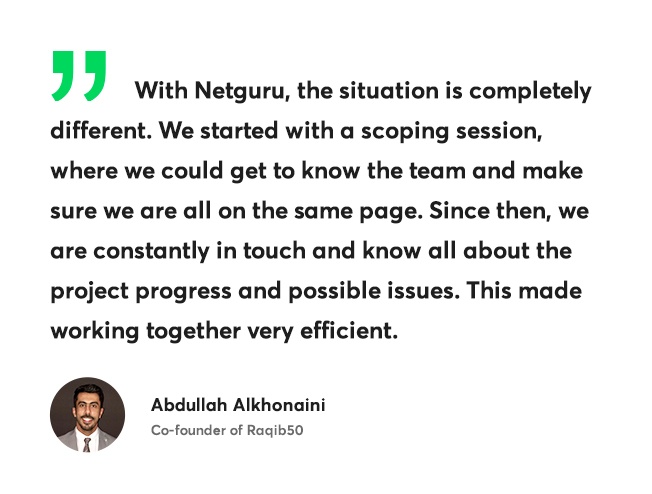 Adjusting the Scope on the Fly

The deadline was suddenly just weeks away, and we were just a little bit behind the schedule. There were two reasons for the delay. First, designing and programming the frontend in Arabic language, so exotic for Europeans, was quite a challenge. Second, the Raqib50 founders are perfectionists and wanted every detail to be flawless before the launch.

The developers were great, and had no major issues with the exotic language. Moreover, they even made some translations on their own using automatic translators. My biggest concern - miscommunication with a remote team - proved to be groundless. Apart from weekly calls, we kept in touch to solve all the language issues. Abdullah Alkhonaini, Co Founder at Raqib50

These are the moments, when all the time and effort dedicated to scoping session pays off. If every member of your design and development team fully understands the project, the idea behind it, the goal, and the value the product is to provide for the end users, it makes many things possible.

We quickly brainstormed the solution, and suggested changes that would simplify the development, and make it possible to meet the unexpectedly tight deadline. The solution was to postpone two features, which would make the MVP still fully functional. Fortunately we were able to convince the Raquib50 founders to do it - says Abdullah Alkhonaini, a co-founder of Raqib50.

The new app version was released on the 11th of November 2016, just three weeks before unexpected early parliamentary elections. Five days before the election date we added one of the dropped functionalities.

It was worth it.

During the first months the website averaged 1,400 visitors a day, a vast majority on mobile devices. The voters could easily navigate through every MP's history, and adjust their decisions to the previous actions of the politicians. Our MVP proved to be fully functional, and the service provided by Raqib50 much needed for the Kuwaiti citizens.

At the moment Netguru is working on the next stages of Raqib50 project, and putting more effort into bringing more transparency into Kuwait politics.

READ ALSO FROM Our Way
Read also
Netguru’s Approach to Fintech: How We Helped 14 Companies Build Successful Products
R&D Leaves the Lab and Meets Business – Learn How to Manage Innovation Without Wasting Resources
How to Run a Profitable Business and Put Sustainability at the Center of Your Strategy
Need a successful project?
Estimate project