Before the release of iOS 12, if your app offered a specific category of service (e.g. messaging or payments), it could integrate Siri to let the user perform certain actions (intents) in response to spoken commands. It was cool, but Siri only recognized phrases defined by Apple, and you couldn’t create your own custom intent. With the introduction of iOS 12, Apple made it possible to create your own intents and also released Siri Shortcuts.

What is a Siri Shortcut?

A Siri Shortcut, just as the name suggests, is a shortcut to an action in your app. These shortcuts are displayed as cards, which are the result of any Siri search that relates to your shortcut. Apple suggests only integrating Siri Shortcuts in your app for actions that users often perform. The Shortcuts application provides actions that can be performed by Siri, but you can create this series of actions as a single shortcut by yourself during application development. Also, by implementing suggestions in your application, it can suggest a shortcut to add for actions which haven’t been performed so far. Shortcuts also make it possible to use different applications in a single shortcut.

Let’s imagine that you’re creating a shortcut that will execute when you wake up and you want to perform a series of actions: check the traffic, order an Uber, and then also order breakfast to your office. Siri can send this information as a parameter to a next action. If Siri sees that there are traffic jams in the city, it will book a taxi for you in advance so that you will not come late for work. Then, Siri will send a request for breakfast to be ordered to your office. If you would like to do the same actions by yourself, it will require you to open at least 3 different applications, so it’s easy to say that it won’t be faster than Siri Shortcuts. This Siri capability also allows you to integrate different applications with each other.

Should developers include Siri into a mobile app development process?

Nowadays, we have access to many new technologies – virtual reality, augmented reality, or machine learning – and the way consumers use apps has changed over the past few years. People use voice to interact with content and applications. Many of them use it to search for things or dictate messages. There are many smart home and digital assistants devices, such as Amazon Alexa or Google Home, thanks to which the use of voice for control is becoming more and more popular.

Still can't decide if you should add Siri to your app? Contact us and let's find out! 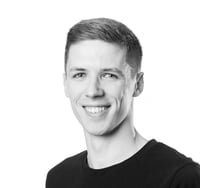