The Future of  Fintech: What Role Will the Startups Have in Financial Services?

The  Fintech sector attracts billions of dollars in VC investment. Each week, new startups take over markets that used to be controlled by banks and insurance companies. What will come out of the revolution? Who will win? How will it shape the future of financial services? Read our take on  Fintech vs. Banks.

Just how hot is  Fintech? It’s scorching. The total capital invested in  Fintech startups rose from $1.8bn in 2010 to $22.3bn in 2015. This year should be even better as the first quarter brought another $5.3bn, a 67% increase year-over-year. The market is becoming more mature now, as the investment is shifting to the later stages of startup development and more VC leaves via acquisitions and IPOs. The trend makes cities like New York and especially London extremely important on the world's startup map.

So far the US has dominated the investments, but European startups are gaining traction with London’s rising as the global  Fintech capital. The role of the Asia-Pacific region has also increased recently.

The rise of  Fintech is the main point of concern for traditional financial companies. The biggest consulting firms have been providing them with analyses and recommendations on how to deal with new competitors.

It's hard to believe, but the financial sector executives didn't quite see it coming. The authors of "The Future of  Fintech and Banking" report still in 2010 no bank they spoke to during their  Fintech Innovation Lab event in New York believed their corporations could be challenged by startups. They argued that sustainable banking services were too complex, too risky and too heavily regulated for new players to emerge.

Today, banks and insurance companies are well aware of the challenge they are facing. They know that are unable to innovate at the pace set by the startup ecosystem, where hundreds companies perish for one company to succeed and get the jackpot. Traditional finance sectors need to act immediately.

Trillions of dollars in revenue?

"Absent any mitigating actions by banks, in five major retail banking businesses - consumer finance, mortgages, lending to small and medium-sized enterprises, retail payments and wealth management - from 10% to 40% of bank revenues (depending on the business) could be at risk by 2025", McKinsey analysts wrote in "Cutting through the  Fintech noise". McKinsey tracks more than 2,000 startups who offer both traditional and innovative financial services. They estimate that the overall number of such businesses amounts to around 12,000.

Each of those fields is being challenged by new tech companies. At the moment, startups operate mostly in retail segments (62% of companies tracked by McKinsey). Only 11% of them deal with corporate clients. The following are the segments most popular among startups: 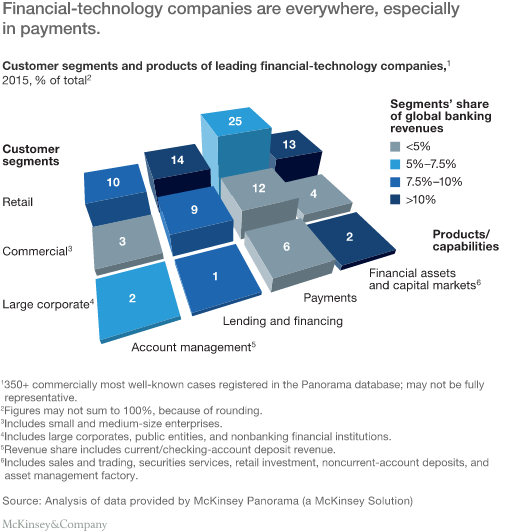 What drives the change?

According to McKinsey, a successful  Fintech maverick company usually come up with one of these six innovations:

We can also group  Fintech startups according to their attitude towards traditional financial companies. Some collaborate with their more traditional counterparts, others engage in direct competition. The graphs below show that the trends in the US and in Europe have been exactly opposite. In 2015 in Europe, 86% of investments went to competitive Fintech (in comparison with only 62% in 2010). In the US, however, the figure dropped from 60% in 2010 to just 40% in 2015.

What will be the future of Fintech?

Accenture’s survey of senior industry executives draws two possible scenarios. The first scenario predicts that traditional finance will lose to the new players. Forced to meet strict regulations and cost reduction goals, they will be unable to compete with more agile startups. The banks will operate on the less profitable segments of finance and their brands will be relegated to suppliers of normal everyday utilities in the eyes of the customers, which will make them similar to water, energy and gas companies. In consequence, more exciting services and products will be provided by smaller disruptive companies. This is the scenario the most aggressive Fintech investors would love to see come true.

The second scenario assumes banks will embrace the innovations at the business model level. They will use their resources (money and data) to predict future trends and tech users’ expectations. Eventually, they will come up with exciting new products and services.

Traditional finance need to act as fast as possible, e.g. by building their own innovation labs. Deutsche Bank have recently unveiled their innovation lab in Silicon Valley. Here you can see a gallery of some innovation labs created by companies from the banking sector. It's hard not to notice that they begin where the startups usually finish: with fancy offices and recreation zones for engineers.

That's not the type of environment that helped London startups from this list come up with their innovations. Is trying to build a creative tech-driven team inside of the most talent-drained area in the world a good idea? I don't think one can recreate a networked ecosystem inside a multinational corporation with any budget. They might want to try co-operating with smaller companies, acquiring already developed startups or employing remote development teams.