Here’s 5 Things that Walmart and WhatsApp saw in Indian Fintech. And You Should see it, too.

It’s not a coincidence that Paytm, the largest e-wallet firm in India, has close to 400m users. It was not a throw of a dice that made WhatsApp choose India to run a trial of a payments service and convinced Walmart to pour billions into acquisitions and investments on the subcontinent.

The Indian financial and payments industry is booming, both on the startup and on the banking side. The government and local regulators are paving the way, and users follow - the value of digital transactions in the Indian market has risen more than 50-fold over the last two years alone.

So here’s five things that WhatsApp and Walmart have both seen in India. And if you’re working in the fintech industry, you should see it, too.

The term “e-rupification” was coined by “The Economist”. And there was a reason - the Indian government and local regulators paved the way to the fintech revolution to an extent rarely seen in the Western world.

“Payment fintechs are better integrated with banks in India than elsewhere,'' the headline in “The Economist” read, explaining that the financial revolution has been shaped by the government (though not always by design).

And when “The Economist” calls it a revolution it is not an overstatement – the value of digital transactions in the Indian market has risen more than 50-fold over the last two years alone.

The key factors behind this digital breakthrough are:

As for numbers, UPI crossed one billion transactions in October 2019. The local regulator (RBI) is now implementing a new interface for data sharing, called Sahamati. There is a lot of hope in the market that it will be a success similar to UPI.

2. Banks are innovating, not defending

Most of the larger banks, such as RBL Bank or Yes Bank, have already launched some form of an API, even though there is currently no regulatory requirement for Indian banks to provide these kinds of interfaces. Most banks are trying to innovate - both internally and in collaboration with startups.

Banks are doing it out of their own interest, as they see the Indian economy growing quickly and are looking for ways to win new customers. In Europe, I see banks in a defensive position as the market is mature and customer growth is limited - Lars Markull, who is now helping the Open Bank Project with its expansion in India, said in an interview for Netguru.

3. The fintech industry is booming

The adoption rate for fintech products in India stands at 59%, the second-highest pace worldwide, as the analysis by DataLabs by Inc42 shows. This is also significantly higher than the global average adoption rate of 33%.

And there is a plethora of fintech companies and startups experiencing fresh capital inflow, funding rounds, and successful exits.

Paytm, a digital wallet company, the only decacorn (a venture valued at over $10 bn) in India, is playing in a league of its own.

But it is just the tip of the iceberg - Kunal Shah, an Indian entrepreneur who sold his previous startup FreeCharge for $60m, raised $120m for his new venture Cred, a credit card loyalty scheme. Zest Money, which is offering a consumer lending service for online shoppers without requiring a credit card, raised $20m. And there are plenty more well-funded companies, such as PolicyBazaar and Razorpay, to name a few. 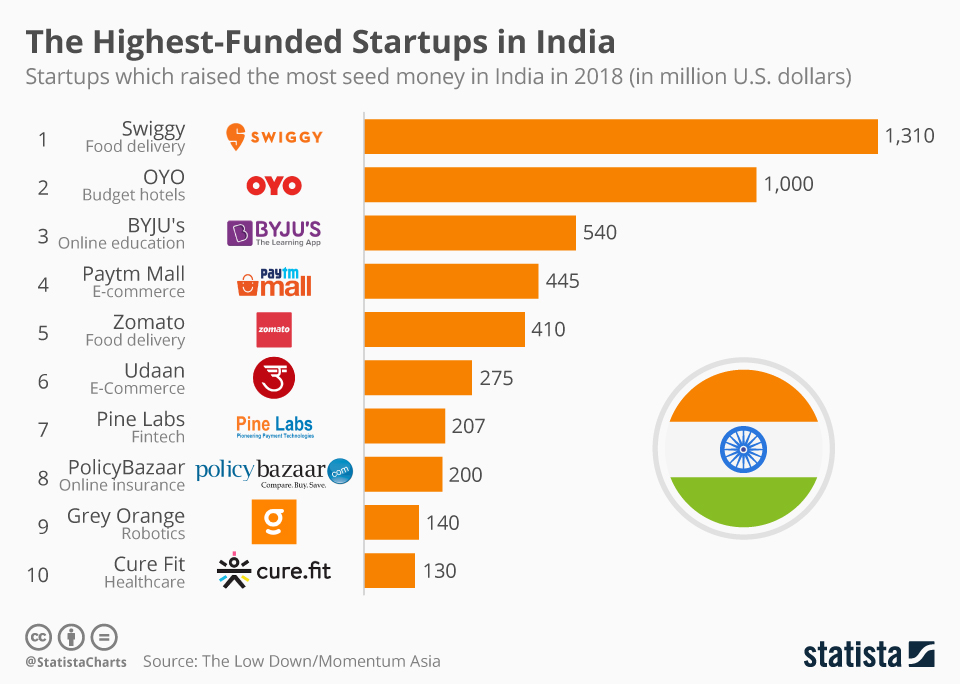 A few observers raised their eyebrows as Kreditech, a German-based lender, announced raising EUR20m to fuel an expansion in the Indian market.

I am really excited about our growth plans in India. We hold a first-of-its-kind digital NBFC (non-banking financial company) license in a large and fast-growing market. We have been successful in finding our niche and have established the right proof of concept. Now it's time to scale up while a key target customer segment remains unaddressed by the competition - said David Chan, Kreditech CEO in the statement.

The combination of the two makes perfect sense. Kreditech uses algorithms (big data) to assess credit scoring and provide loans to customers that may have been hastily excluded by financial institutions.

India – with at least 400m creditworthy citizens and fewer than 50m credit cards – serves as a perfect example of an underserved market.

Local fintech players, like PayTM, MobiKwik, Citrus and PayU, are also “taking advantage of the rapid increase in the use of smartphones, internet connectivity and online shopping to integrate payment processing into web applications - stated a 2019 report of the Steering Committee on Fintech Related Issues.

For those following Walmart’s acquisitions closely, the growing importance of the Indian market in the company’s strategy comes as no surprise.

The $16bn takeover of Flipkart pushed Walmart to the top spot in e-commerce marketplaces in India. And the board of Walmart is certainly happy for the Indian government’s efforts to get every Indian a bank account, a cell phone, and a biometric ID.

There's a big growth opportunity there. We’re very excited about the team in both Flipkart and PhonePe payments business. (...) they're very disruptive in the way they think about reinventing categories to address customers’ needs - Richard Mayfield, EVP and CFO at Walmart stated back in June 2019, at the dbAccess Global Consumer Conference Call.

It’s not only about e-commerce. PhonePe, owned by Flipkart, is an app designed for all cashless payments – from e-commerce to utility bills. The app is seen by Walmart as a crucial component in the ecosystem, and it has been growing very rapidly.

PhonePe, designed for all cashless payments, is seen by Walmart as a crucial component in the ecosystem

In the words of Walmart’s CFO, PhonePe is aiming to create India's largest transaction platform built on payments. And then to “use that platform to leverage some pretty big profit pools in markets like financial services,” Richard Mayfield added.

Given that the government plays in favour of innovation, banks are opening up, and the investors’ money keeps flowing towards fintech startups, keeping an eye on India is a must for any fintech trends scout.

To wrap it up, let me steal a quote from Lars Markull’s interview:

I would say it is rather refreshing to see what is happening in India. The open banking mindset is currently suffering in Europe, and especially in Germany due to the technical implementation of PSD2 by many banks.

In India, in contrast, the fintech sector is booming.