How to Start with Kotlin/Native?

Kotlin is becoming more and more popular.  It took second place in most Loved and fourth place in most wanted technologies in last Stack Overflow Developers Survey!

What’s that? Kotlin/Native is a technology for compiling Kotlin to native binaries that run without any Virtual Machine. It comprises a LLVM-based backend for the Kotlin compiler and a native implementation of the Kotlin runtime library. What does it mean to us? We are allowed to compile Kotlin for platforms where VM are not desirable or possible (for example iOS!).
Kotlin/Native currently supports the following platforms:

We can target 3 OS for Desktop, the 2 most popular OS for mobile, and Raspberry Pi! 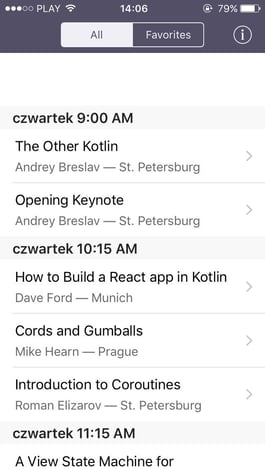 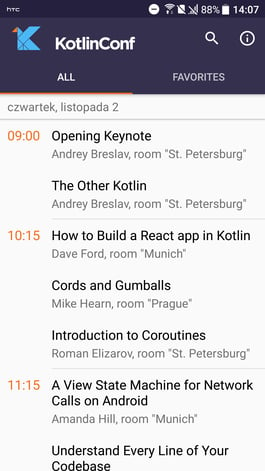 Example of application written in Kotlin/Native. The screenshots come from iOS and Android  KotlinConf App created by JetBrains.

That’s the theory. Let’s check how it looks in practice.

Starting with Kotlin/Native is not easy. Unfortunately there is no dedicated IDE for Kotlin/Native development. The only one in JetBrains family which supports it at this time is CLion, which is problematic for projects looking to be multiplatform with JVM, JS or iOS. And the biggest problem, in my opinion, is that CLion doesn’t support Gradle...

Let’s start our adventure with installing CLion. In order to use Kotlin in our projects, we have to install a couple of plugins, namely the Kotlin plugin which provides core support for the language, and the Kotlin/Native plugin which adds functionality for native support. Moreover, the second plugin give us a couple of existing projects templates. I would recommend you to use the CLion Early Access Program builds, because it contains support for most recent Kotlin/Native plugins.

Now we can start with our first application written in Native! Click on the New Project wizard and choose the HelloWorld template. After creation, our project should like the one presented below: 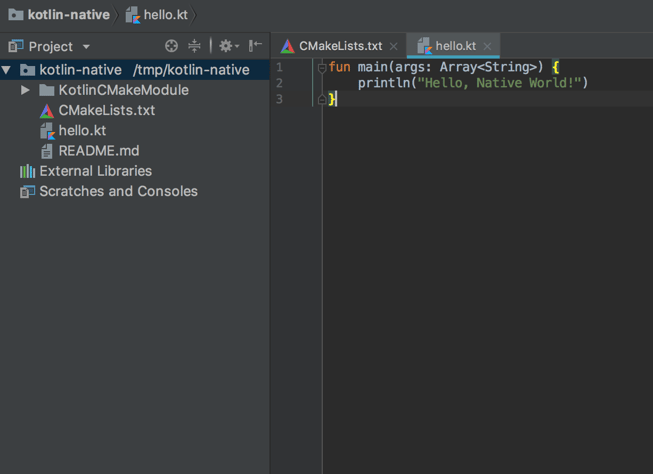 Now we can build our project, run and :ta-da: - Hello, Native World! appears on the console. It looks like everything is working properly, but where’s my Gradle? Unfortunately, CLion doesn’t support Gradle, so we need to write the script manually.
Kotlin/Native has a plugin for Gradle which allows us to compile, build libraries, reference libraries, and in general perform all the actions that we would need to build our application. In order to compile our HelloWorld application we need to do two things: From the root directory, where our build.gradle file is located, we can now run the following commands:


One more important thing - In order to be able to use CLion, we need to have our project defined using CMake. The Gradle plugins provides us a convenient way to do this using the command: generateCMake. The result is a new file named CMakeLists.txt which allows us to open the project in CLion.

To sum up, we gained some basic knowledge about Kotlin/Native and sample project setup. As you could read there are some pros of using it in our applications, but there are many cons that makes Kotlin/Native really hard to use:

Kotlin Native is still under development, but in my opinion it looks like it can be a great tool in the nearest future.

Despite all the cons I’ve mentioned above I would like to encourage you to give Kotlin/Native a try!

Photo by Oliver Pecker on Unsplash