RUPY 2012 aka GuruMobil on the road

Ahoy! It’s been more than a week since our GuruMobil has started off to RUPY Conference to explore Brno and connect with other Ruby enthusiasts. Marek, ...

Ahoy! It’s been more than a week since our GuruMobil has started off to RUPY Conference to explore Brno and connect with other Ruby enthusiasts. Marek, ... 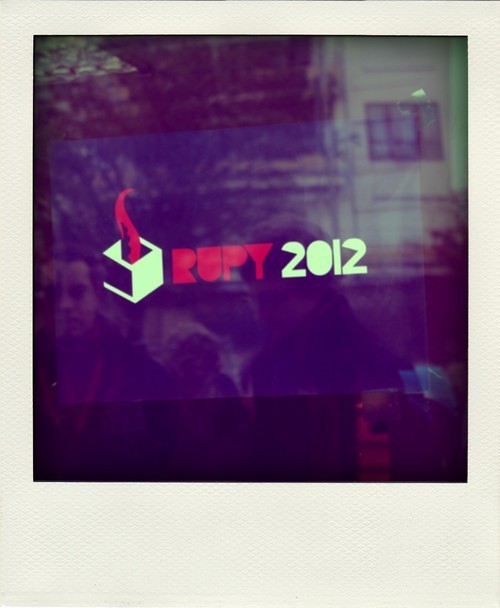 Ahoy! It’s been more than a week since our GuruMobil has started off to RUPY Conference to explore Brno and connect with other Ruby enthusiasts. Marek, Krzysztof , Marek, Jacek, Adam, Łukasz i Tomek from our team, along with fellow friends Grzegorz and Krzysztof, joined Jacek in the quest for some juicy programming hints. It’s been quite a madness - Ruby, Python and JavaScript developers all in one place, jolly good. Not to mention the music jam, pub crawl, and some not exactly expected adventures with our little bus;)

Below you’ll find a speedy sum up of the talks that guys found the most engrossing:

Breaking the Big Ball of Mud by ** James Coglan - creator of Faye**
Why writing code fast is not good at all and how James finally figured it out. The idea itself is maybe not brand new but still worth remembering. James described how they are trying to minimise the technical debt at Songkick by replacing one monolithic application with many small web services - each responsible for a particular use case. Such a minor web services are much easier to develop, test and deploy. Architecture designed for larger projects.

The Future of Development by Mitchell Hashimoto - vagrant creator
Mitchell’s presentation was focused on different approaches to web development and trends which are likely to work out in the future. The idea behind is to remove the responsibility of self-configuring of all the tools on his/hers machine (eg. databases) from the coder and to keep the developer environment as close as possible to the production one. According to Mitchell it can be already partially achieved with vagrant - a virtual-machine based environment configured by eg. chief (exactly the same as the production environment).

** 'Why should I care about Rails 4?' by Steve Klabnik**
A really engaging speech on what is coming next in programming! A lot of juicy bits and real life examples! But what else can you expect from the guy who’s a keen contributor to Rails’ core? Who haven’t got the chance to see it yet, should definitely dig the video.

When not to use OO’ by Mike Burns
A prez full of concrete hints on programming techniques. Good to hear that the world does not end on Object Oriented Programming.

** Single Page Applications with CoffeeScript by ‘the’ **** Andrzej Krzywda**

Frontend first. Hexagonal architecture. MVC. During the entire speech, Andrzej was trying to convince us to treat back-end and front-end as 2 separate applications and to acquire good patterns of the real MVC. (Backend serving mainly as API). Something to think about, especially as the LocalStorage could become a pretty handy feature soon.

** Event oriented architecture and big client side applications by Mihael Konjević **
A catchy talk about events - nice to confront with our own patterns (especially the interesting catalogue structures).

JRuby by Charles Nutter
JRuby looks pretty interesting - the results (in terms of performance and scalability) on large applications are 1-2 times better than a standard Ruby implementation. A little bird told us that it’s all thanks to a real good Java garbage collector and iterative code refactoring.

You will find more photos from the event in our RUPY album.

READ ALSO FROM Events
Read also
4 Amazing Talks You Can't Miss from EmberCamp 2017
Where to Go: Best Ruby-Related Events of 2016
The Best Picks from Ruby Day Conf 2015
Need a successful project?
Estimate project or contact us