Digital Laggards: Is The Future of B2B Companies at Risk?

Not so long ago, McKinsey published an article showing that B2B companies face serious challenges when digitalising and are significantly lagging behind their B2C counterparts. And yes, it is a reason to worry. Because the lag is substantial and has increased over time, and it says loud and clear that it’s high time to take action.

That is why McKinsey created a scale named Digital Quotient, which puts into perspective the most important organisational factors. Furthermore, in Digital Quotient, the score and position also reflect the financial performance of the companies, because McKinsey have found out that there is a strong correlation between becoming a digital player and the return margins. After analysing 200 B2B, companies McKinsey found that the top quartile players generate 3.5% more revenue and are overall more profitable than the rest of the B2B field. It is quite important, as McKinsey distinguished over 18 management practices improving digital efficiency which correlate strongly with growth and profitability – not necessarily by creating a new market, but rather due to the improvements in cost efficiency on the existing markets and through better communication with new clients. Since when going digital boosts financial performance you may ask when it is so costly? Well, when you think critically about your organisation in the four management dimensions McKinsey use (strategy, culture, organisation and capabilities) you might find out the areas which are slowing down your organisation, find processes which are cost ineffective or understand why clients prefer the competition.

So what exactly McKinsey did is that they took the Digital Quotient scores of B2B and B2C companies and compared them. The results are as follows: 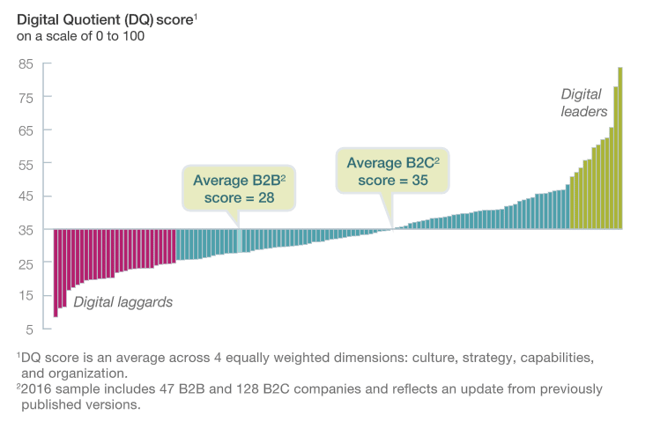 So there is an actual reason for concern, especially since there are more digital laggards than digital leaders, and the leaders are very likely to gain control over the market.

Why Did This Happen?

Simply put, B2B companies don’t follow the trend set by customers, which is the need for digital-only interactions coming along with rapid digitization. Moreover, many companies don’t feel the need to give the appropriate digital tools to sales representatives (even though it’s often a must). Achieving a digital leadership position requires a lot of work, but through the four dimensions, you can learn how to improve your score, segment by segment. By using Digital Quotient, you will establish which out of those dimensions are the most problematic in your case (or find out that all of them are problematic).

What Can I Do?

If you don’t act now, digitalisation may become even more complicated than it already is. Have you already started working on it? It’s great if you have – now you have to remember not to slow down your progress. If you haven’t done anything yet and you’re taking your sweet time to do so, please remember that your business is in serious danger now, and we are not exaggerating.

But we’re here to help. Let’s take a look at the four components McKinsey specified and see the reasons why B2Bs are lagging:

The main issue is that top management still don’t see digitalisation as their investment priority. The management see it as a ‘project’ rather than a strategy. B2Bs need to deeply integrate its digital strategy into the overall strategy or else having a separate digital approach will hurt them really badly. Actually, completely discarding your current strategy in favour of having a full digital strategy might prove to be more efficient. Having a separate digital approach makes the process fragmented and inefficient. This happens because stakeholders are not really interested in the whole process and have no clear vision. But do you know what’s even scarier? Three out of four companies that McKinsey surveyed don’t believe that their industries have to adopt a digital strategy. That’s a massive number and only shows how threatened this portion of the industry is by disruptors. If this doesn’t change anytime soon, you can only expect an enormous material impact on most industries in the foreseeable future.

Because B2Bs have separated their digital strategy from the overall strategy is hard for them to take any steps in motivating the whole company to start using digital tools. Creating a coherent digital strategy means that you will have to abolish the internal power relations and make everyone feel valuable. In this category, B2Cs have 29-percent better performance than B2Bs, and the lag shows that it is difficult to push any digital initiatives. So far there are no signals that leaders can so much as clarify how the digital strategy will be conducted and what actions other members have to take in order to successfully adopt the strategy. Furthermore, there’s still a lot of confusion as to who’s playing which role in the whole process. One way of solving that is to put a bit more effort into establishing the structures needed for the implementation of the digital strategy. And also please remember about communication. Teams have to be aware of what’s going on, what you’re planning to achieve, how it will be achieved and what their role is. And don’t forget that everyone must feel the responsibility and ambition to achieve that.

Again, companies who have no clue on how to adopt the strategy (or even have no clue what their digital strategy is) will spectacularly fail in this aspect. The only outcome of a poor digital management is talent and resources being wasted. With the right talent assigned to the right tools and tasks, the digitalisation can proceed very swiftly, as proven by B2C companies. What is more, the right tools are at your fingertips – with the right approach to social media or digital content creation tools companies have the ability to successfully reach out to potential clients. Especially since clients, even businesses, have voiced their preference for digital interactions. Additionally, if companies properly used the data they have and comprehensively analysed them, they could find a whole range of processes which could be effectively automated and optimised.

Looking at it from a more realistic perspective, you will have to completely reimagine your capabilities at some point. Especially if you are a large corporation on an established market. But think about it this way – software is literally eating and reshaping the industry. New skills are required to progress, so additional trainings for your staff might prove helpful. Please note that you need some fresh, innovative ideas to progress, and you have to believe in the power of software which can affect your core. And if you’re feeling very confident about your current status, remember that more than 52% of Fortune 500 companies were no longer on this list in 2015.

Fortunately, there is some ‘not-so-bad’ news. On average, B2Bs aren’t that far behind B2Cs in terms of organisational values. More and more companies are being externally and internally interested in becoming agile to digitalisation. Still, becoming interested is a long way away from being agile (and being successful as a result). If you have already started taking some action – it’s good that you see the importance of it, but ‘some action’ is not enough. Actually, it’s far from enough. Compare yourself to agile organisations and see what’s your actual score and based on that, look at what rate you have to work to become fully agile.

Companies neglect many interesting practices and hold back the whole process as a result – the test-and-learn approach to digital initiatives in particular. Fewer than 15 percent of companies have adopted this tactic. It might be worth your while, because it is efficient and generally able to push the digital strategy forward.

Just think about change. Change is crucial, and you’re more likely to push upwards the other three Digital Quotient score if you change.

What Is Going to Happen Soon?

‘What can we expect in the nearest future?’ you may ask. Well, broadly speaking there are two general paths. The first one, and a very optimistic prediction, is that B2Bs will wake up from this lethargic sleep and get inspired by the example B2Cs have set out. The lag will be still visible, but in strictly in terms of B2B environment, companies adopting digitalisation are more likely to substantially increase their chances of becoming disruptors in their fields. The second path? Eternal damnation. Seriously, all the data and trends are currently pointing to that. The lifespan of large organisations has been getting shorter for a very long time already, and this change only keeps on gaining velocity. At some point, it will be too late to adapt, and the competition will eat you alive. Thus, the choice seems to be quite simple: are you willing to change in order to survive or do you intend to keep your current strategy based on an obsolete view of digital strategy and hope for a massive stroke of luck? The lag will increase over time to a point where the very existence of some companies might be in danger. Grim. But we have to be honest here: B2Bs are doing little to work on their digital strategy, and McKinsey points out the results of this oversight. The result of those processes is a massive lag, which is constantly increasing.

The choice is yours – do you want to sleep for five more minutes? Tobiasz Jankowski
Looking for innovation?
We hack industries
READ ALSO
Read also
How to Become an Innovative Company
Digital Laggards: Is The Future of B2B Companies at Risk?