Usually there is no difference when you choose Array or Set. You take Set if you want a collection type with unique unordered elements. But you do not care about performance or RAM usage, because they are often similar. Have you ever asked yourself what happens if your collection has to store almost 3 millions of elements like strings?

I have, because I am an author of unofficial iOS Scrabble dictionary – Scrabbdict. There is no problem with 3 of 4 available dictionaries: two English (SOWPODS and TWL) and French dictionaries are quite small, they contain from 178,691 to 386,264 words. Polish dictionary contains 2,964,259 words. And there is no simple solution to handle that big collection.

It was my first iOS app and I wrote it in 2013 in Objective-C. I remember it was working perfectly on iOS simulator, but when I bought my first developer license it was crashing a lot on a real device, because of too high memory usage. I resolved it by splitting Polish dictionary into multiple files: 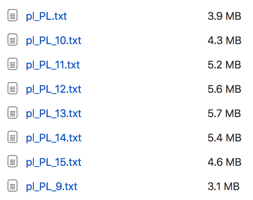 It was reasonable and really fast especially for short words. Furthermore memory usage was acceptable.

I used Array and loading a dictionary was as simple as this:

But handling this was inconvenient and limited possibilities.

When working on 3.0 update I decided to implement more complex features like points for all words and simple regex (blanks) support. I knew that a key to this is better performance. Now I want to share with you different solutions to the problem and let you know what technique Scrabbdict actually uses.

To show the difference between "standard" and "clever" collection type objects I created this graphic: 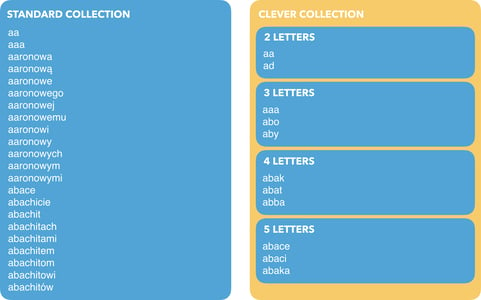 Disclaimer: I am not going to post here all source code, but you can take a look at the repository, which I strongly advise!

Each one of mentioned collection type implements Validator protocol:

I believe these are clear.

Before I'll let you see the results, I'd like you to see the most basic validator class:

The initialization and validation function are self-explanatory. The function that returns words that can be made from given letters may be not.

First, it gets all possible permutes from given letters. To make it faster minimum length of permute is 2 characters, because single letter words are not valid in Scrabble. Then, creates a somewhat forgotten NSPredicate object. You may ask why and that is a very good question.

The same result can be achieved in at least two ways here:

Unfortunately the first solution is extremely slow. When permutes counts 86 strings (that happens for five letters query) and the first solution is used, it takes around 170 seconds to return results. The latter solution needs less than eight seconds (sic!). The more permutes, the difference is bigger.

I'd like to present you results of multiple performance tests for different collection types.

Let's start from something simple, but important…

Just simple word validation – the result is a boolean value that determines if a word is correct or not. Each validator validates 15 words one by one in this test. 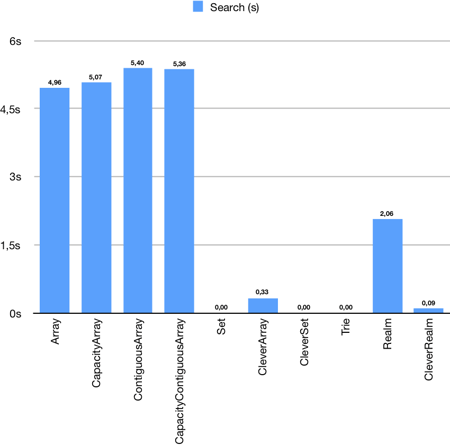 Again, there is no big difference between the first four arrays. Sets and trie are extremely fast. Set because of object uniqueness and trie because of its structure. Standard arrays are simply slowest, but clever objects look really good. Especially CleverRealm when count init time in.

Words made from given letters

Imagine that I give letters I, T and L, and expect words that can be made from them. So lit, til, it, li and ti should be returned. So it's the same, but in Polish :) 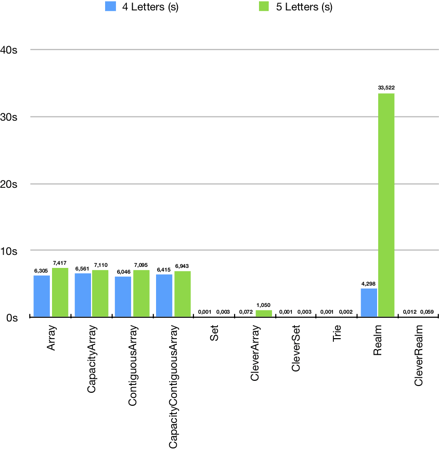 The results are a bit surprising. There is a huge difference between 4 and 5 letters for standard Realm database. Sets, trie, CleverArray and CleverRealm are really fast in this test, so I decided to run more tests for the fastest four of them. 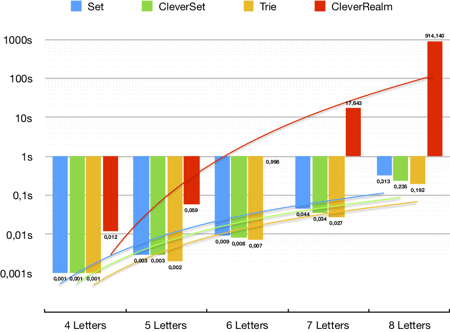 This chart has logarithmic scale with power trend line.

Sets and trie growth when more letters is reasonable, but CleverRealm is useless for more than six letters!

CleverRealm is the fastest, while Realm is the slowest. Important thing is that Trie is faster than standard Swift collection types.

Last, but not least – it eventually makes some types useless.

As you can see trie and sets RAM usage is unacceptable high, because it may cause crashes especially on older devices. Arrays RAM usage is high, but acceptable – unfortunately their performance is not satisfactory. Realm RAM usage is close to null.

It's really hard to say which collection type is the best. No one is perfect and the same applies here.

I believe that the best solution is to use more than one technique at once and that's how Scrabbdict works. Normally it uses solution similar to CleverRealm database – it's fast for word validation and simple regexes. But when the app is started, in background it creates a trie with words up to 8 letters and uses it to find words made from given letters. In Scrabble you can't have more than seven tiles on your hand, so eight letters limit is still fine and a trie is really fast.

Such limited trie (there are just less than half a million words up to 8 letters in Polish) initializes quite fast (but it really doesn't matter so much, because it happens in background) and is one the fastest solutions. 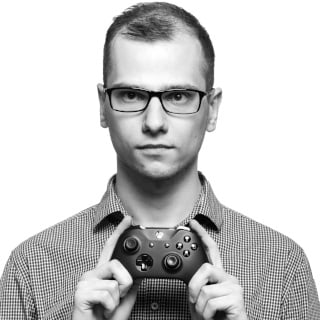