I can imagine this article's title made you think: what is a keyboard layout guide? I've never heard of it! Is there a marvelous yet hidden API in the iOS SDK that significantly improves keyboard handling? The answer is: unfortunately not. This article is about a solution that I have been using for at least three years, and it is surprisingly simple and works pretty well. But let’s start from the beginning.

Every iOS developer experiences a problem with the keyboard sooner or later. When visible, it covers quite a lot of the screen. How much? Let’s do some math:

It means a keyboard on the iPhone 11 covers 33.59% of the entire screen area. That’s a lot. And we didn’t take into account the UITextField.inputAccessoryView nor the keyboard’s dictation bar. We don’t want to have our beautifully designed screen covered by a keyboard, do we?

There are two typical solutions for this kind of issue:

Both require some calculations and frame or constraint changes. Ideally, it would be good if a solution could encapsulate this logic into a class or two so it could be written once and used out of the box easily later.

Let's check how a view hierarchy looks when having a single view app created from scratch with a hidden keyboard:

and a visible keyboard: 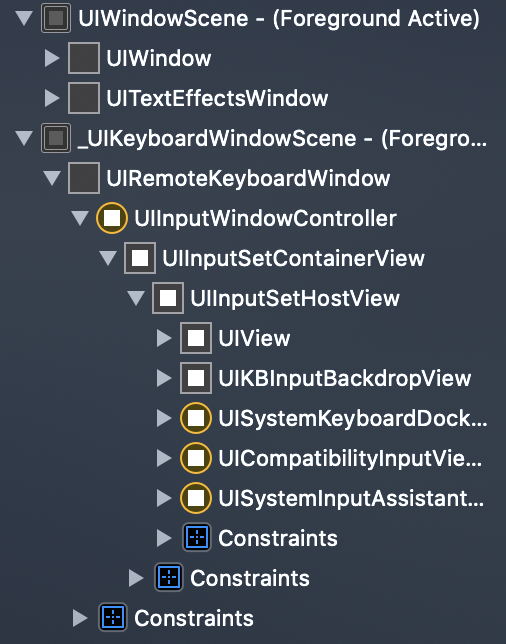 It's easily noticeable that another private window appears over the main window we usually code in. So a keyboard has its own dedicated keyboard. The question is: do they affect each other? Let’s check both window’s frames:

The frames are equal. It doesn’t matter whether a keyboard’s window is visible or not, the main window frame stays as it was, and the main window’s descendant views’ frames also stay untouched. So how could we know when a keyboard appears or disappears? The answer is NotificationCenter. iOS system sends plenty of notifications. For keyboard handling, we are only interested in three of them:

Having this knowledge in mind, let’s build a perfect solution from scratch.

The concept behind a solution is to change a view controller’s view size when a keyboard appears so all descendant views will be notified about the change and will layout appropriately. Before doing so, let’s check the documentation of the UIViewController class:

Having read this, it might not be a good idea to manipulate a view controller’s view size directly. Instead of that, we will use a UILayoutGuide and set constraints this way to allow automatic adjustment of when a keyboard appears or disappears. Let’s visualize it. The video below shows a UITextField rendered in the middle of the screen. At the bottom, you can see a view with a red background, which has a height equal to two points if the keyboard is not present. If UITextField becomes the first responder, then the keyboard appears and the view with a red background stretches vertically, so it’s still visible two points above the keyboard. You can even notice the keyboard's background is a blurred red.

Magic? Absolutely not. Just a few lines of code.

Let's create a class that inherits from UIView and call it View. Within this class, create a UILayoutGuide instance:

This looks like a lot of code, but it’s pretty simple overall. However, here’s the step-by-step explanation:

The first part is behind us. Let's dive into UIViewController's business logic. Create a class that inherits from UIViewController and call it ViewController. This controller will be responsible for several things like registering for keyboard notifications, extracting the necessary data from the notification object, making some calculations, and telling the associated view what to do. But let's start from the very beginning:

Similarly to the previous example, let's go step by step:

Before moving further, we need to know what data from a Notification object is necessary to make this solution work. Let's take a look at the UIResponder keyboard type properties. We need to obtain only two of them:

So let's embed this logic into the handle extension and place it within the ViewController class.

Having all of the implementation we have already written, let's move to the final part and create the business logic of keyboard handling:

Whoa! That's a lot of code. Here’s the breakdown:

Note: The code snippet above contains some repetitions for the sake of readability. On GitHub you will find an optimized solution.

All right! We did it. Written code makes the view controller automatically react to the keyboard's occurrence. Awesome. Time to push some life into this solution.

Do you remember the criteria to meet at the beginning of this article? Let me quote:

Ideally, it would be good if a solution could encapsulate this logic into a class or two so it could be written once and used out of the box easily later.

So let me prove that the presented solution meets this 100%. Let's implement a screen that probably all of us have already written more than once: a sign-in screen. It should look as follows:

Also, when the keyboard appears, then the sign-in button should change its position with animation so that at the end, it will still be visible above the keyboard.

Important: instead of constraining the bottom anchor of the sign-in button to view's bottom anchor, constrain it to keyboardLayoutGuide.topAnchor, which is accessible because SignInView inherits from View class.

At this point, you may wonder why ViewController doesn't register itself for the keyboard's notification automatically. It's done this way because sometimes a screen logic requires not to react on keyboard's occurrence. It's always better to explicitly turn on additional behavior, especially when it might not refer to the entire application.

Now embed the SignInViewController into the UINavigationController hierarchy, build and run, and voila! It's time to admire how well it works:

With minimum effort, we have created a reusable solution for a complex problem. Of course, it has some downsides, like the necessity of View and ViewController inheritance, however, the gain is outstanding. The final code is clear because descendant classes use only two variables: automaticallyAdjustKeyboardLayoutGuide and keyboardLayoutGuide. The whole business logic happens under the hood, so this solution can be easily reused across the entire application. Everything is extremely easy to use, read, and understand.

I encourage you to take a look at the GitHub repository where you can find more examples:

All required classes are already placed within the KeyboardLayoutGuide/KeyboardLayoutGuide folder on GitHub, so if you would like to use this approach, you can download and link them to your project. Happy coding!

Photo by Denisse Leon on Unsplash