13 Top Companies That Have Trusted Vue.js – Examples of Applications

Vue.js has already earned a significant spot among the most popular JavaScript frameworks. Its popularity growth in the last year has been astonishing, and it’s definitely not going to stop anytime soon.

Developers have been interested in Vue.js for quite a while now, and today the framework is surrounded by an active community of enthusiasts. It was only a matter of time before companies began to see the potential of Vue.js.

Here are 13 companies that trusted Vue.js, and the reasons why they believe that it was the best technology choice for them.

Vue.js comes in handy to developers who need a tool for building movie streaming interfaces. Netflix jumped on the opportunity early on and - according to one of its developers, Kunal Kundaje - applied Vue.js in two of its smaller, internal apps.

Adobe offers a product called Portfolio, a custom website builder designed to help users showcase their creative work. Adobe wanted to maintain the exceptional user experience and performance, so they decided to have its fronted teams switch to Vue.js and migrate the existing codebase smoothly. Vue.js proved easy to integrate with the existing codebase and serves Adobe well.

Xiaomi, one of the most prominent Chinese unicorns, designs, develops and sells everything from consumer electronics to software. This impressive company with a $1B+ valuation is said to have used Vue.js to build its fantastic products, proving the framework’s strong international adoption.

Another impressive international adopter of Vue.js is Alibaba, a public company from China. Together with giants representing a similar scale like Baidu or Tencent, it trusted the framework to deliver an excellent experience to its customers.

The budget airline WizzAir is said to have used Vue.js in building the fantastic user interface in its apps. Unfortunately, the company hasn’t shared any detailed information about the use Vue.js in their digital products.

A multilingual news media service headquartered in France, Euronews is another adopter of the Vue.js technology. Since the developers behind Euronews’ apps aren’t sharing any details about their implementation of Vue.js, we can only speculate about its use in the company’s digital products.

The frontend team of Grammarly took advantage of Vue.js to build their signature user interface which is simultaneously simple and aesthetically pleasing.

Laracasts provides developers with concise screencasts that are updated every day and feature plenty of learning resources to help users learn web development. The user interface of Laracasts looks great thanks to Vue.js.

An open source solution that supports the entire software development lifecycle, GitLab experienced difficulties with implementing and maintaining complex features and struggled to scale their Rails + jQuery app.
Thanks to gradually introducing Vue.js adding new features, and migrating old ones is an option without the hassle of rewrites or refactoring.
Vue.js helped GitLab boost time & cost efficiency. It also allowed the company to implement more complex features that in turn increase their sales.

Codeship is a cloud-based continuous integration platform that used Vue.js to deal with crashes and freezes in their app, and make testing easier.
Since they implemented Vue.js, they haven’t experienced a single app crash and their code is more reliable and easy to maintain.
Moreover, Vue.js provided them with a UX boost that customers appreciate.

An all-in-one web-based webinar solution, LIvestorm helps companies create live sales demos and customer training materials.
Their bet on Vue.js was a good one - the framework made them operational within a week, generating 20-30% revenue growth monthly and enjoying positive feedback from customers.

Behance is a leading platform for showcasing creative work. Behance wanted to move from homegrown solutions to a community-supported technology and picked Vue.js.
Thanks to the framework, Behance could migrate the existing codebase smoothly and now takes advantage of the excellent performance and cost-effectiveness Vue.js which brought on board. 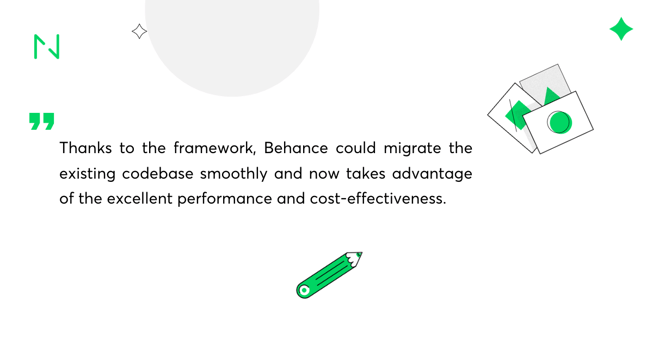 Choosing the right tool for the job is an important decision. New technologies are evolving at an increasing pace, and it’s difficult to keep up with them. Naturally, each new technology has its drawbacks and advantages.

Knowing that recognised companies take advantage of a particular technology helps build your confidence about its potential for your business.

Still not sure whether Vue.js is the right choice for your project? Ping us at hello@netguru.com; we’ll be happy to help you make the right decision. Whether it's turning to Vue.js, React, or any other technology - we’ve got you covered. READ ALSO FROM Frontend
Read also
Storythinking: An Honest and Effective Approach to Data Visualization
8 Examples of Highly-Successful Angular Apps Many of Us Use Daily
7 Benefits of Angular You Should Know if You Want to Build a Digital Product
Need a successful project?
Estimate project