How to Effectively Scale Your Web Application (Updated)

When you build a great product it will eventually attract more and more users who will expect performance and availability.

As the app grows and over time it handles more requests per minute. If you’re not prepared for this, app performance will drop and you will potentially lose your audience.

This article will show you what to pay attention to when building a scalable app.

What is application scalability?

Application scalability is the potential for an application to grow over time – being able to efficiently handle more and more requests per minute (RPM). It’s not just a simple tweak you can turn on/off, it’s a long-time process that touches almost every single item in your stack, including both the hardware and software sides of the system.

In case of problems you can keep adding new CPUs or increase memory limits, but by doing so, you’re just increasing the throughput, not the app performance.

It’s not the way you should stick to when you see your app is starting to have efficiency problems. Scaling the app is not an easy thing and thus you should know your app very well before starting to think about how and when to scale it.

Here’s a quick overview of how the internet has grown over the last 20 years: 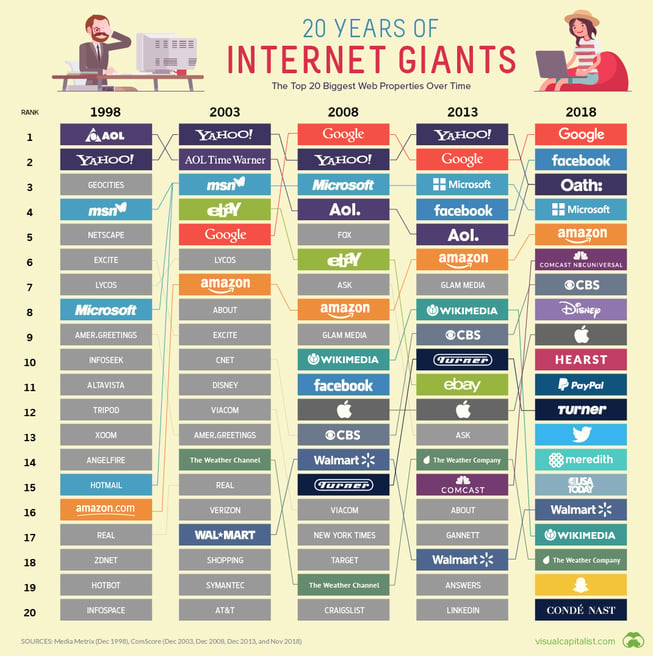 What are the common problems with app scaling?

Let’s use Rails as an example – some say it introduces scalability issues when your project grows too large, but the applications ability to scale is more about the whole system architecture, not only the framework itself.

But it doesn’t mean that scaling a Rails app is always a pain – of course, Twitter moved from Rails to Scala, but on the other hand, Shopify is constantly growing with Rails at the backend for about 10 years, with over 50,000 requests per minute and 45ms response time.

Even if you don’t have performance or scalability problems like Twitter or Shopify, planning and developing the application in a proper way is priceless, regardless of the nature of potential problems.

You may face dozens of different issues when it comes to scaling – a few general sources of your problems may be related to:

Rails is a great framework with an incredibly huge community and millions of already answered questions online – it has hundreds of great open-source tools that you can use to instantly build into your stack and a lot of profiling and analyzing tools that can help you identify bottlenecks in your system.

How can I get quick wins?

Let's use Ruby on Rails as an example – use these points to help your developer team scale efficiently:

There isn’t any magic formula for scaling an app – every single application is actually a unique system.

But if you pay careful attention while developing your app it can be surprisingly easy to handle its growth – thanks to a great set of available tools you don’t have to be an expert to scale your application.

In most of the cases, optimized code, efficient SQL queries, proper DB indexing and some caching should be enough to get started.

If you are wondering how Rails compares to other frameworks check out our recent article – and for more inspiration on how to scale your app we put together a great post on going serverless.