6 Types of Applications You Can Build With Node.js 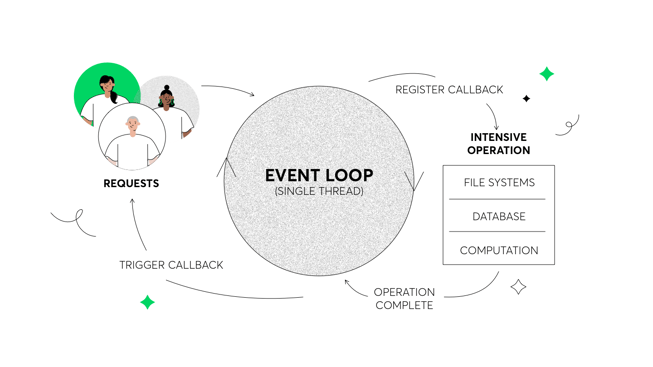 IoT (Internet of Things) is a network of devices such as sensors, beacons, actuators, and any other items embedded with electronics that enables them to send and exchange data. Normally, IoT systems pass data from devices to servers and from servers to applications that process it and display it to users.
IoT may consist of thousands of such devices, which makes it challenging to manage requests and data streams from and between the devices.

Since 2012, when the popularity of IoT rose dramatically, Node.js has become one of the preferred solutions for enterprises and organizations seeking to develop their private and public IoT systems.
The most obvious advantage of Node.js as a back-end for such networks is its ability to process multiple concurrent requests and events emitted by thousands or even millions of devices on the network.
The avalanche of requests and data coming from IoT devices does not block Node.js servers thanks to their event-driven architecture and asynchronous processing suitable for I/O-heavy operations on the IoT network. This makes Node.js fast as an application layer between these devices and databases used to store data originating from them.

In addition, IoT developers working in data-intensive scenarios can leverage the low resource requirements of Node.js. Low memory requirements allow for the easy integration of Node.js as software into single-board controllers such as Arduino, widely used for building digital devices that make up IoT systems.
Finally, the Node community has been an early adopter of the IoT technology, creating over 80 packages for Arduino controllers and multiple packages for the Pebble and Fitbit wearable devices widely used in IoT systems.

The maturity of the Node.js ecosystem for IoT explains why the environment has been used successfully in many IoT products. For example, Skycatch used Node.js in its specialized drones that take photos of construction sites and turn them into 3D models and data needed to kickstart construction projects.

Node.js is also used successfully in commercial products such as Siemens Smart Grid (Monet), a power management solution designed to save energy resources and detect energy use anomalies and potential hazards. Monet uses Node.js as an application layer and MongoDB for data storage, both hosted in the Microsoft Azure Cloud. 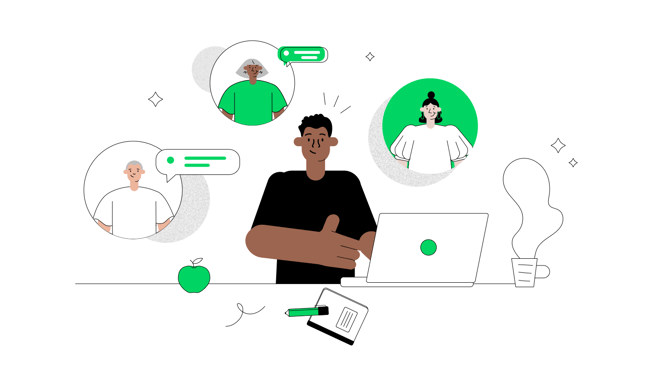 Real-time chat is any online communication tool that enables the live transmission of text, video, or audio messages from a sender to a receiver. Real-time chats can take the form of one-to-one or one-to-many group chats built on instant messaging (IM) or Internet Relay Chat (IRC) technologies.
These days, real-time chats are widely used in social networks, commercial sites, and pretty much everywhere on the Web.

Node.js provides all basic functionalities for building real-time chats of any complexity. In particular, Node has a powerful Event API that facilitates creating certain kinds of objects (“emitters”) that periodically emit named events “listened” by event handlers. Thanks to this functionality, Node.js makes it easy to implement server-side events and push notifications widely used in instant messaging and other real-time applications.

Node’s event-based architecture also works well with the WebSockets protocol that facilitates a fast two-way exchange of messages between the client and the server via one open connection. By installing WebSockets libraries on the server and the client side, you can implement real-time messaging that has lower overheads and latency, and faster data transfer than most other, more conventional, solutions.

In Node, you have excellent support for WebSockets via such libraries as socket.io, ws, or websocket-node, thanks to which you can easily deploy efficient real-time chats and applications.

With socket.io, for example, all you have to do to create a basic live chat is to install the socket.io library on the server and the client, and create event emitters and broadcasters that will push messages across the WebSockets open connection. This basic functionality can be achieved with just a few lines of code. 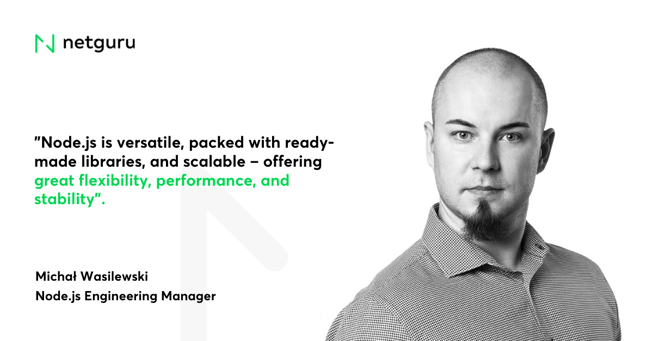 Single-Page Applications (SPAs) are a popular approach to web development in which an entire application fits on a single page with the goal of providing a user experience similar to a desktop app.

In SPAs, all client-side scripts are loaded into a single  HTML page that works as the main entry point of the application, while all partial views are loaded into this central template on demand.

At the same time, background AJAX requests ensure that the application updates without the need for a full page reload, which makes it feel as if you were using a desktop application.

These days, SPAs are widely used to create social networking apps, online drawing and text tools, and many more. The classic example of a SPA is Gmail, with its AJAX-powered seamless updates of newly arrived messages.

Node.js is a great fit for SPAs thanks to its efficient handling of asynchronous calls and heavy I/O workloads characteristic of these applications.
Node.js’s event loop allows to “delay” multiple concurrent requests from the client, which ensures smooth transitions between views and seamless data updates. Also, Node.js works well with data-driven SPAs, where the server acts as a backend that provides data to the client whereas the client does all the HTML rendering.

With such framework as Express available via the NPM repository, you can turn Node.js into a REST API streaming data and services from specific routes. Such approach helps reduce the server’s load while ensuring API sharing across different applications and environments. In this scenario, Node.js would only return the index page (index.html) while data would be sent via REST interfaces and controllers implemented server-side.

From the design point of view, such approach will ensure the clear separation of concerns (SoC) between models, controllers, and views with all data-related services implemented server-side.

Finally, Node.js is good for SPAs because it is written in the same language (JavaScript) as many popular JavaScript frameworks (Ember, Meteor, React, Angular) used in building SPAs.
Since both Node.js and browsers use JavaScript, there is less context switching between them, and developers can use the same data and language structures and modular approaches both on the server and the client side. This results in faster development and better maintainability of your SPAs.  The above advantages of Node.js have been leveraged by such famous SPAs as Netflix, LinkedIn, and Medium, to name a few. 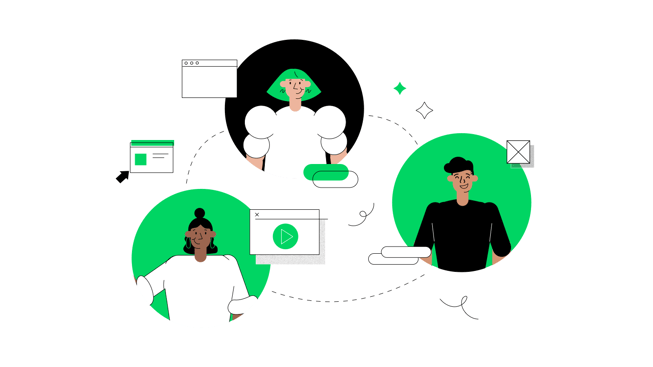 As in the case of the real-time chats, Node’s asynchronous and event-based architecture is a great fit for collaboration apps. In these applications, many events and I/O requests occur concurrently. For example, several users can edit the same paragraph, comment, post messages, and attach media. Changes to one piece of content might be applied only after a cascade of events, where each step depends on the previous one.

Node’s WebSockets and Event API will ensure that heavy I/O operations performed by many users do not make the server hang and that all server-side events and data are sent back to the client on time.
By emitting push notifications to the client, Node.js will also instantly update the collaboration environment so that all users have a single and coherent representation of the application. This is precisely the reason why the team of the project management application Trello uses the Node.js stack. The engineering team of Trello decided that Node.js would be great to instantly propagate a lot of updates and hold a lot of open connections, thanks to its event-driven and non-blocking architecture.
Among other real-time collaboration apps built on Node.js, we should also mention Yammer, a freemium social networking service facilitating private communication in enterprises.

Node.js is excellent for the development of such streaming applications thanks to its native Stream API.
In particular, Node.js has an interface of readable and writable streams that can be processed and monitored very efficiently. Stream instances are basically Unix pipes that allow transmitting parts of the app’s executable code to the local machine while keeping a connection open for new components to download on demand.
Streams allow users to pipe requests to each other, and stream data directly to its final destination.
As a bonus, streams do not require caching and temporary data – just an open connection to stream application data from one place to another.

Node.js is an excellent solution for developing microservices and creating easy-to-use APIs to connect them. In particular, the Node.js repository features Express and Koa frameworks, which make it easy to mount several server instances for each microservice and design routing addresses for them.
Node.js with Express allows for creating highly flexible modules responsible for specific parts of your application.

In addition, Node.js can be easily integrated with Docker and will thus allow you to encapsulate microservices in hermetic containers to avoid any conflicts between the application development environments used in each of them. Using Node.js for microservices also benefits from Node’s lightweight requirements. Node.js with microservices significantly reduces application deployment time and enhances efficiency, maintainability, and scalability of your applications. Microservices architecture also helps manage the division of labor in your engineering teams efficiently, enabling them to work on specific tasks without affecting other parts of your application.

These benefits have been successfully leveraged by PayPal, world’s leading online payment system, which has used Node.js to power its microservices architecture since 2013.

PayPal modularized its application stack and split the development process into many microservices, and thus organized their teams to work on them more efficiently. PayPal was able to scale Node.js so that multiple teams could work on the same project.
The results of this transition were stunning. PayPal’s Node.js app could be built twice as fast and with fewer people. The company has managed to reduce its code base and improve performance, where a single core Node app could handle twice as more rps (requests per second) than 5 Java apps used by PayPal before. 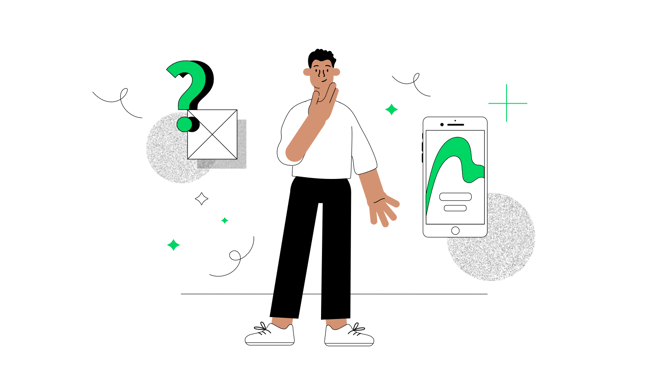