How to hire a great Ruby on Rails consulting service is the primary concern for those who want to build applications in this popular framework.

From mastering hard skills, such as writing clean code or object-oriented programming, to knowing the most popular tools such as Git, RSpec and their text editor of choice inside out.

When thinking about taking on new team members you still need to consider their soft skills and attitude. The real experts invest as much time in developing their soft skills as in being up to date with the relevant new tech trends.

Check their Ruby on Rails consulting communication and problem-solving techniques and observe how they behave in the meantime: are they open-minded, creative, and curious or rather shy away from being exposed to new experiences?

This is the only way to provide top notch Ruby on Rails consulting service.

Becoming a great Ruby on Rails developer is not easy -  and finding a good one to work with is even harder.

That’s why we asked our most experienced programmers to define the top skills, qualities, and tools used by experts - as well as how to avoid a bad hire.

Based on this information we put together a guide -  whether you want to:

We’ve got the answer.

All of our interviewees agreed that the hard skills of good programmers are as important as the soft ones. Long gone are the days when IT was a dreary department hidden in the basement of a corporate building.

Today, computer code is the heart of every modern business, and domain experts need to adapt to their growing role.

The number one hard skill is easy to guess- every Ruby on Rails developer should know how to write clean and easy-to-understand code.

The second most important best practice suggested by our teams include knowing how to split code into small not-coupled modules while using SOLID principles. SOLID design means using five rules that make it easier to understand and maintain software.

Additionally, a good coder needs to know the framework inside out. Starting with the philosophy, implementing the right patterns at the right time all the way through to understanding its shortcomings.

Last but not least comes object-oriented programming - a paradigm that helps manage complex software systems and avoid errors when changes to the code are made.

Pop culture paints coders as lone hackers who need nothing more than a computer and an internet connection to change the world - nothing could be further from the truth.

Software developers often work in teams - this is why consulting and communication skills are very important. Good developers should be open to code reviews and be willing to discuss their work, accept suggestions, share their knowledge and ask for help when needed.

Next on the list are problem-solving skills such as research and analytical thinking. Problem solving is closely related to the last of the top three skills: quick learning.

Our Ruby on Rails developers suggested that it’s also advisable for a developer to understand the business environment their solution will work in.

What are the three qualities of a good Ruby on Rails consulting team?

We’ll risk involuntarily promoting those infamous motivational coaches by saying that - when it comes to defining the best Ruby on Rails developers: attitude is everything.

Open-minded, creative, and curious – these are the traits that most of our team defined as crucial.

Writing software is a team effort - and when the project requires scaling the number of developers involved, it’s important that they know how to adapt themselves to a new situation.

Scaling is a quality valued by one of our clients, Ruairí Doyle, Head of Product at Apps for Good:

“Generally, we worked with two to three developers. However, the effort could be scaled up on demand. That's another key benefit of working with Netguru: their scaling model. They move their spare capacity from project to project, and junior developers were brought into our project to speed things up. This is very important for a project with a limited budget.”

What are the three tools that every good RoR developer should know?

It seems that learning has recently become the pastime of choice in the professional environment. One can spend their entire life studying new tools and domains but will it make them a better expert? Not always. If their education list is longer than their experience- they might be doing it wrong.

It’s hard to pick just three tools, but here are the top ones that our most experienced programmers couldn’t live without:

Of course, that’s not all!

Some of the other recommended tools for Ruby on Rails developers include:

- RubyGems such as Devise: an authentication solution.

- They should also know how to program in SQL and feel comfortable using a database engine such as Postgres.

How to spot a poor RoR developer?

All that glitter is not gold - we’d all like to spot the difference sooner rather than later.

Remember we showed you how much it costs to recruit? Let's take a look at what happens with a bad hire: 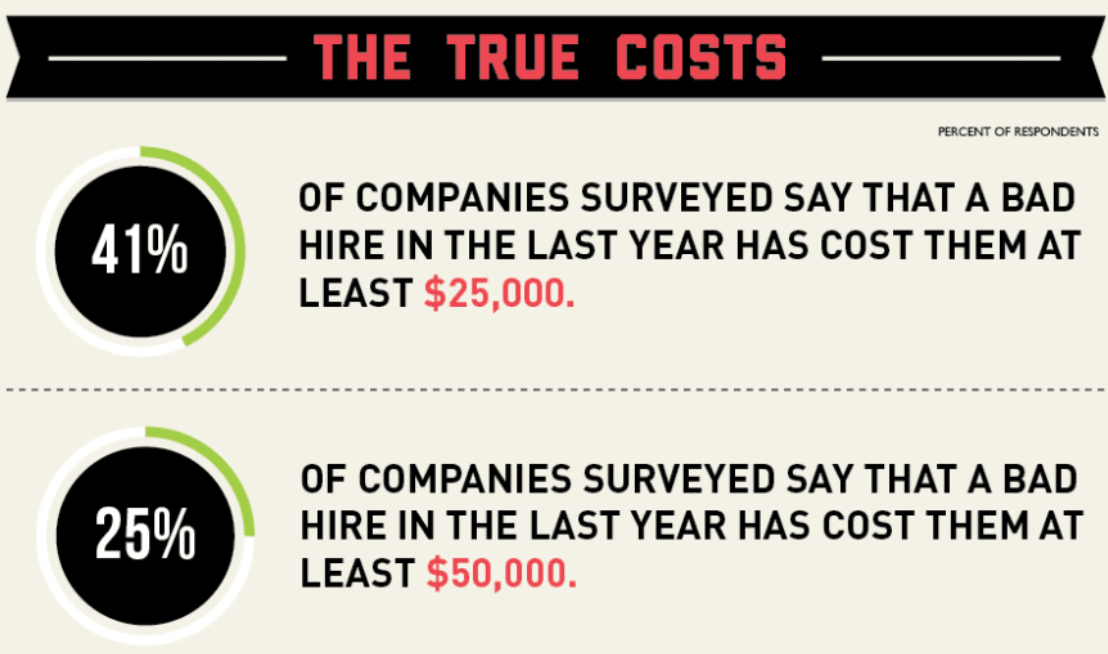 Hiring a bad developer can cost even more.

Fear not- when it comes to spotting the worst practices- we have you covered.

And it’s all about the three Cs: poor code quality, poor communication, and poor commitment.

The first one is easy to spot- take a look at code formatting (not compact enough, too complicated) or check whether they write tests for their code.

It’s a bit harder with communication, as problems may arise from a wide variety of issues – from being unable to talk about problems or ask for help to losing one's temper or taking any critique personally.

However, the worst anti-social skill is a lack of commitment. The first two can be masked well in the beginning and not get discovered until the project is well under way.

So if you feel that something is not right, better trust your gut.

Or hire a successful Ruby on Rails consulting agency to get the job done right.

Summary: a checklist for finding the best Ruby on Rails Consulting Agency

When you decide to invest in building a new software product, you want to be sure that you’re delegating work to real experts.

That’s why we prepared this cheat sheet for you with all the relevant information on Ruby on Rails developers’ skills, qualities, and the tools they use.

Follow these steps to give your project the best chance of taking off without a hitch.

We are a team of Ruby experts with 10 years experience in delivering high quality Rails products - feel free to contact us if you need a hand.