We Asked the Industry: "Is Ruby on Rails Dead?"

I came across some pretty cool stats that got me thinking.

After reading our recent roundup of the top 34 companies using Ruby in 2019 the common theme of ‘based in San Francisco’ was pretty obvious.

So I did a bit of searching – did you know the highest amount of open developer positions in the Bay Area was for ‘Rails’? (1066 positions). That was in 2018.

I wonder if the decline in HB1 visas is part of the reason why so many Rails developers are needed – and why so many companies look to outsource teams.

Our team has certainly been busy – so we put the question "Is Ruby on Rails dead?" to the industry and to our team of 96 RoR developers.

See what they had to say below: 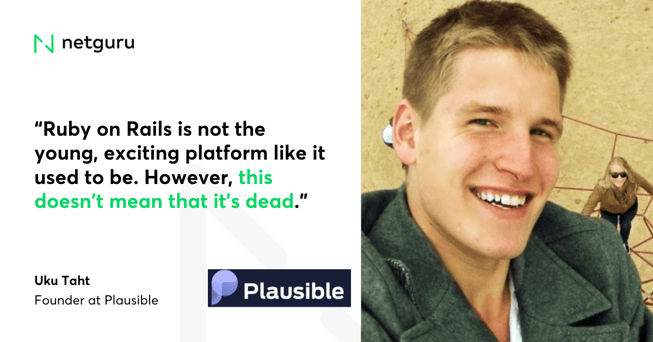 Ruby on Rails is not the young, exciting platform like it used to be. However, this doesn't mean that it's dead.

Far from it – RoR is now a stable framework with known strengths and weaknesses, an extensive library ecosystem, and large numbers of trained developers. It's a proven, reliable tool that will be a part of our toolkit for a long time to come. New frameworks have dethroned Rails from the 'new and exciting' position, but Rails has dethroned PHP from the 'familiar and reliable' position. I wouldn't hesitate for a second to use Rails on a new project or business today. 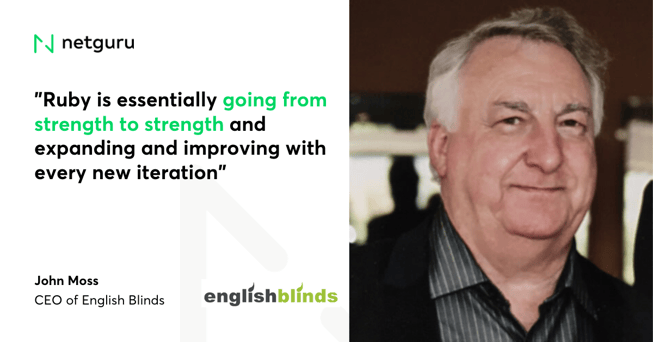 People have been saying Ruby is dead or certainly on its way out for several years now, but most such claims are made about prior evolutions of Ruby rather than the version we are working with today – which is far from dying and is in fact evolving.

Looking at the new release and plans from the end of 2018 onwards, Ruby is essentially going from strength to strength and expanding and improving with every new iteration to meet the growing needs and expectations of its users.

Ruby is definitely not dead. If we consider it together with Ruby on Rails, then this platform has grown enough to be a stable, mature and rich solution for web development. Every year so much happens in the ecosystem, new version releases, conferences, lots of new learning resources. It all proves that Ruby is a vital solution for web building.

When I see “Ruby is dead”, I think some might say that because there’s not so much buzz around it anymore, other technologies just became more trendy on the market. But if we check, for example, the TIOBE Index –  it clearly indicates that Ruby is not dead and it is still gaining popularity. 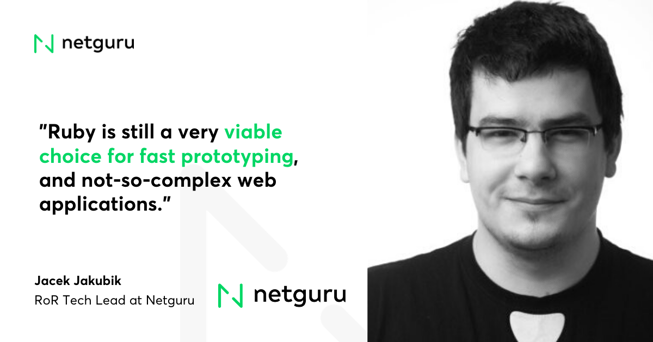 I don't think that saying "dead" for a language or framework is possible at all – there are tons of different businesses which require different types of software and have different needs, and that every piece of code written can be used somewhere.

For sure that applies to Ruby and Rails – it's still very popular, has a very active community, constant updates and new version releases. Ruby is still a very viable choice for fast prototyping, and not-so-complex web applications. 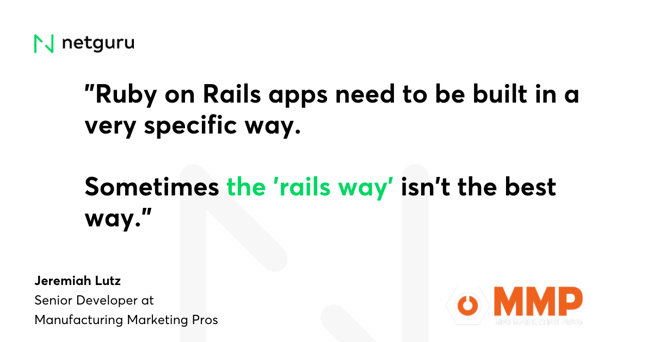 The only applications we still use Ruby on are applications built at the peak of the Web 2.0 era. Performance and scaling are two of the biggest concerns.

While Ruby can be scaled, doing so is considerably more expensive than scaling other languages, and the options are much more limited. The lack of flexibility also hurts. Ruby on Rails apps need to be built in a very specific way. Sometimes the 'rails way' isn’t the best way. 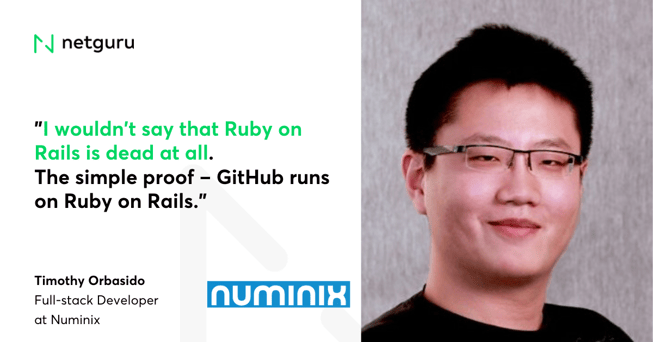 I wouldn't say that Ruby on Rails is dead at all. The simple proof; GitHub runs on Ruby on Rails. Aside from Github however, RR is still relevant and is used by a considerable number of startups, especially in Vancouver.

These days it is used as a base for prototyping, scalable apps, and content management systems. This is despite Node eating into Ruby's popularity. It's also hugely popular in other countries like Japan, which shouldn't come as a big surprise considering that's where Yukihiro Matsumoto (the chief designer of Ruby programming language) is from.

The short answer is, no, Ruby on Rails is not a dead language.

The truth is that Ruby just got a recent minor update to 2.7 with a 1.7x increase in performance and is expecting a major update added to Ruby 3 in 2020. Ruby on Rails is not dead, it's evolving. I'm excited to see where it'll go next and what to expect in the newest update.

So generally speaking I'm pretty sure Ruby on Rails is not dead, it's no longer the "cool kid" around different web frameworks – but it's constantly changing, taking into consideration all the new trends in web development.
I also want to point out Ruby developers as a community – by looking at the code we produce – I'm pretty sure we really care about it, we use different tools to keep it readable and clean, we are serious about writing tests, we always try to organize it properly, and all this results in a maintainable and extendable code in the long term.
Marek Buszman, Senior RoR Developer at Netguru

I think people have to be aware of the purpose of Rails. I believe Rails is still the most wanted framework when we think about making a quick MVP or if we want to prototype something and check a concept.

I think people have difficulties recognizing the moment when their projects cross the border from being a startup or concept to becoming a real project. Sometimes we have to stop and spend some more time thinking about architecture and how it should work on a bigger scale. 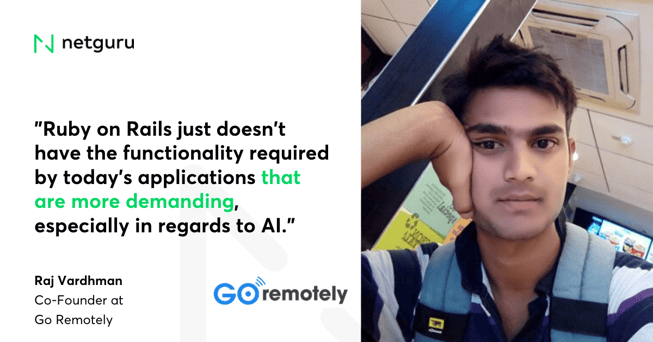 As a developer for many years, I believe that RoR is way passed its prime.

Granted it's one of the originals in the world of development and gave us years of rock-solid performance, I think it's becoming outdated due to AI. Ruby on Rails just doesn't have the functionality required by today's applications that are more demanding, especially in regards to AI.

You simply cannot build artificial intelligence projects on an RoR framework, so it's only a matter of time before Ruby on Rails becomes obsolete. 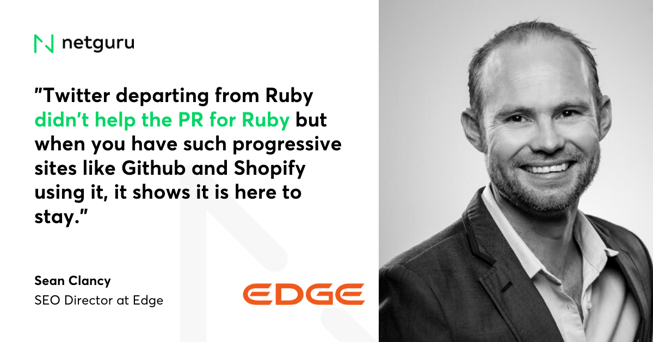 The "Is Ruby On Rails a dead programming language" question get's asked every year, similar to SEO is dead, this is a whole load of baloney.

Twitter departing from Ruby didn't help the PR for Ruby but when you have such progressive sites like Github and Shopify using it, it shows it is here to stay. Ruby on Rails is a very mature programme, and this stands in its favor. There are massive reasons that Ruby will continue to excel.

In my opinion Ruby on Rails is not dead and probably will never be. It's not well suited for all business domains, but it works really good for fast prototyping. My thoughts are based on the market. There were, are and will be many businesses that need to validate the idea before even asking for money from investors. 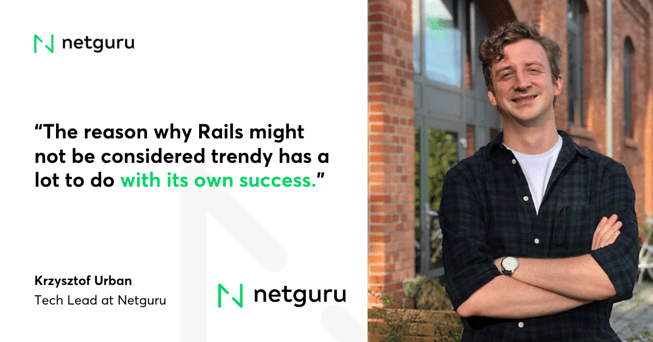 The reason why Rails might not be considered trendy has a lot to do with its own success.

The framework has solutions for many generic problems, and there are community libraries for many more, so there isn’t really that much to add to it at this point. Its rich feature set has become a benchmark for other competing frameworks. It also means that when you develop with Rails the framework is not your focus – you only need to work on functionality that is specific to your application.

Another reason that Rails developers are in high demand is because there’s a lot of knowledge you need to pick up to become one, since it’s been evolving for a while now – companies might choose Node.js over Rails simply because there are more JS devs available, and the barrier for entry might seem smaller.

That wraps it up! It's very interesting to see so many opinions – it seems there are common pro's and con's to using Ruby on Rails which we have rounded up below.

The pro's of Ruby on Rails

The con's of Ruby on Rails

Here are some resources to help you answer these concerns for yourself – we put together a great article about the business direction of Ruby on Rails to help you plan for the future.

If you are wondering how Ruby on Rails can be used in machine learning check out this cool guide – you can also learn more about hosting and scaling RoR as your app gets bigger.

As always we would love to hear your view – drop me a message on LinkedIn or contact our team of 96 RoR developers today.