Choosing the right technology for your mobile app is a key decision that will determine the success of your endeavour. When planning a cross-platform mobile app, you need to make sure that the underlying tech ensures stable performance and adequate user-friendliness. On top of that, it must enable you to create a beautiful, memorable UI.

Naturally, you have to choose a technology before you start building anything – your selection will influence the entire mobile app development process, and making the wrong choice carries the risk of a very expensive rework. We have years of experience in building cross-platform mobile apps, and we’d like to share our knowledge with you to help you make the right decision.

We also came up with a list of 9 key questions you should ask yourself before starting a project – you can find them at the end of this article.

Before we get to our tips, let’s go over the methodology we used to create this article first. At the outset, we spoke to our internal experts – people with years of experience in managing and building cross-platform mobile projects. Then, we researched the market penetration of each cross-platform framework. This parameter is a good indicator of how easy it is to find developers familiar with a framework. Next, we tallied up the strengths and weaknesses of each framework to provide you with clear input for your decision. Finally, we came up with our recommendation on when to use which technology.

We have selected seven cross-platform mobile app frameworks for our comparison:

We’ll go over each one of them in the following sections, finishing the article with a summary and our recommendations.

React Native is a JavaScript framework created by Facebook in 2015. In a nutshell, the main idea behind RN is to allow you to create multiplatform UI components with JSX, which then are bridged to native code and converted to Android and iOS views. Thanks to its low entry threshold, RN has a huge community, which translates into an abundance of freely available third-party libraries (components you can use to build your app). Another advantage of RN is that it’s much easier to learn than the native technologies for Android and iOS but still allows developers to integrate native modules. One disadvantage worth keeping in mind is the fact that RN code is less performant than native implementations – a JS bridge is necessary for your RN app to communicate with the native platform. 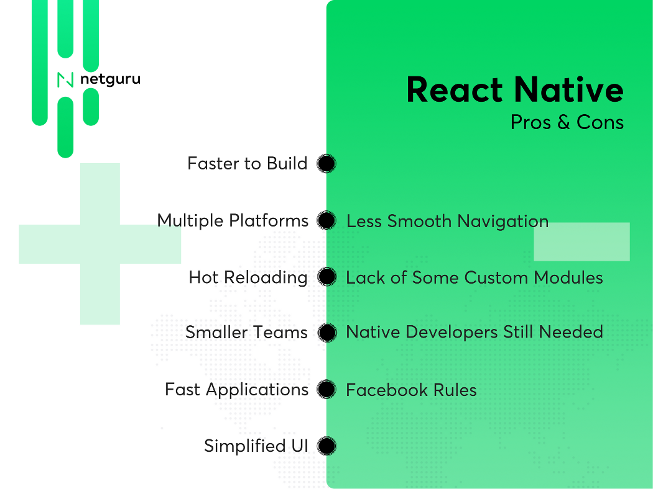 React Native is a good choice if:

Examples of successful RN apps include Facebook, Shine, and Uber Eats. We looked into these in more detail in this article. React Native is not a good choice if you’re planning a low-level, computation-heavy app (for instance, an application that does a lot of visual processing). For more about the pros and cons of React Native, check out this piece.

Thanks to React Native, we were able to develop up to 30% faster than with native development. Optimizing for speed? Check out this case study: 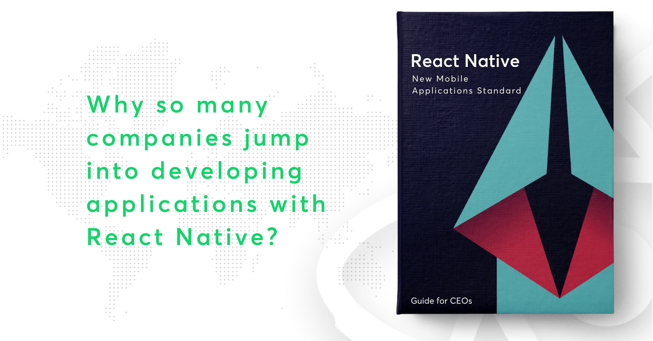 Flutter is a mobile app cross-platform development framework released by Google in 2018. It’s based on the purpose-built Dart programming language (thankfully, it’s very easy to learn), which is then compiled to platform-native code. It’s faster and more efficient than React Native because it communicates with the platform directly (RN requires a JS bridge). Flutter apps are built from so-called widgets, which results in improved compatibility with older system versions. Another beneficial feature is that you can integrate native code with your cross-platform mobile app. However, Flutter has one major disadvantage – its age. It’s very new, so the community is quite small and there are few libraries available.

Flutter is a quite new mobile app development technology but many companies already invested in it creating some amazing apps. The list includes e-commerce giant Alibaba with their mobile app for second-hand sales: Xianyu; app for one of the most famous Broadway musicals Hamilton or legendary recording studio where the Beatles recorded almost all of their albums: Abbey Road Studios.

The latest take on #Flutter by our R&D team is rather tasty!

We took some inspiration from top food delivery apps like @UberEats, @DoorDash, @deliveryherocom and https://t.co/far83einNz to build a simple MVP with Flutter. See our #Lunching #casestudy: https://t.co/PfvcRv8ATo pic.twitter.com/GQLPIMnMul

Xamarin, created by an independent company in 2011, was bought by Microsoft in 2016 and is now maintained by the Redmond giant. This mobile app development technology is a bit different than React Native because Xamarin’s C# code is directly compiled into native languages. This results in it being a bit more difficult to get started with than RN. Xamarin code is written in C#, so developers need to be familiar with the language, which is stabler, but also harder to learn than JavaScript. Same as with RN, some knowledge of native tech is required for more advanced projects. Xamarin’s main benefits include good performance (apps run quickly), access to platform-specific APIs (full hardware support), and shorter delays in introducing platform updates when compared to RN.

There are not so many mobile apps written in C# but some of the most interesting are Storyo - a photo-sharing app and Olo - app for seamless food ordering.

PWAs, or Progressive Web Apps, are not a framework per se, but they are still a valid approach to building cross-platform mobile experiences. PWAs are, in a nutshell, websites adapted to mobile devices. They feel more native than simple websites – for instance, you can add them to the device’s home screen, including a custom icon, or implement push notifications. PWAs can also work offline. However, these are best suited to very simple (basically read-only) apps. Remember that PWA apps can’t be deployed to the Apple App Store.

PWA is a very promising technology that slowly gets traction on the market. Quite recently Google allowed PWA apps to be deployed in Play Store and finally can be downloaded by users. Some big brands like Starbucks are using them and we’ve also done some R&D using Vue.js and PWA.

Ionic’s open source SDK was first released in 2013; the original version was based on AngularJS and Apache Cordova. This is by far the slowest solution on this list – apps built in Ionic work inside WebView, introducing a significant performance overhead. Other downsides include significant difficulties with integrating native modules and difficult debugging. On the other hand, there are a lot of UI components and plugins available for Ionic.

Although Ionic doesn’t have a big market share there are some cool apps leveraging this technology. One of the biggest is MarketWatch done by Dow Jones & Company, Inc  and one of my favorites is Joule: Sous Vide by ChefSteps.

NativeScript was first released in 2015. This cross-platform mobile development platform is based on Angular combined with TypeScript or JavaScript. It’s slower and less popular than React Native, resulting in a low number of third-party libraries and a diminutive community. Its one major benefit is access to native device features, but this is also offered in other, more popular frameworks.

PhoneGap was initially released in 2009; after being acquired by Adobe in 2011, its name was changed to Apache Cordova. Like Ionic, it doesn’t use native UI components, so everything is mediated through WebView. There are no native-feeling UI widgets for PhoneGap and plugins are required to access native APIs. In addition, PhoneGap’s performance is very poor, leading to sluggish apps. 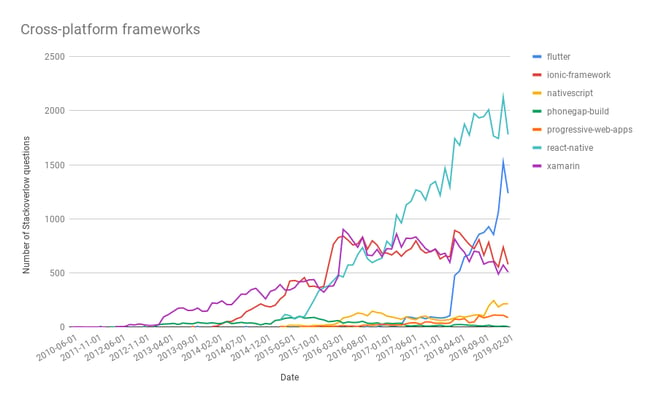 First, you can eliminate NativeScript and PhoneGap from your list of options. We don’t recommend building any custom mobile apps projects using these technologies. This leaves you with five cross-platform mobile app development frameworks to choose from: React Native, Xamarin, Flutter, Ionic, and PWA. What should you consider when picking one from this list? It’s a good idea to ask yourself the following questions before making a decision:

Think carefully about your answers and cross-reference them with each framework’s strengths and weaknesses to make the correct decision. If you’re still in doubt, feel free to reach out – our in-house experts are always happy to advise you about cross-platform mobile app development.