Python has become one of the fastest growing and most popular programming languages in the world. Is it a good choice for your next project though? Python is versatile, it is easy to use and develop. Moreover, it has a very vibrant community. You can easily find support from the best minds in the field. However, there are several disadvantages of Python, which you should take into consideration, such as speed limitation. Let’s see some more pros and cons of Python to help you decide. 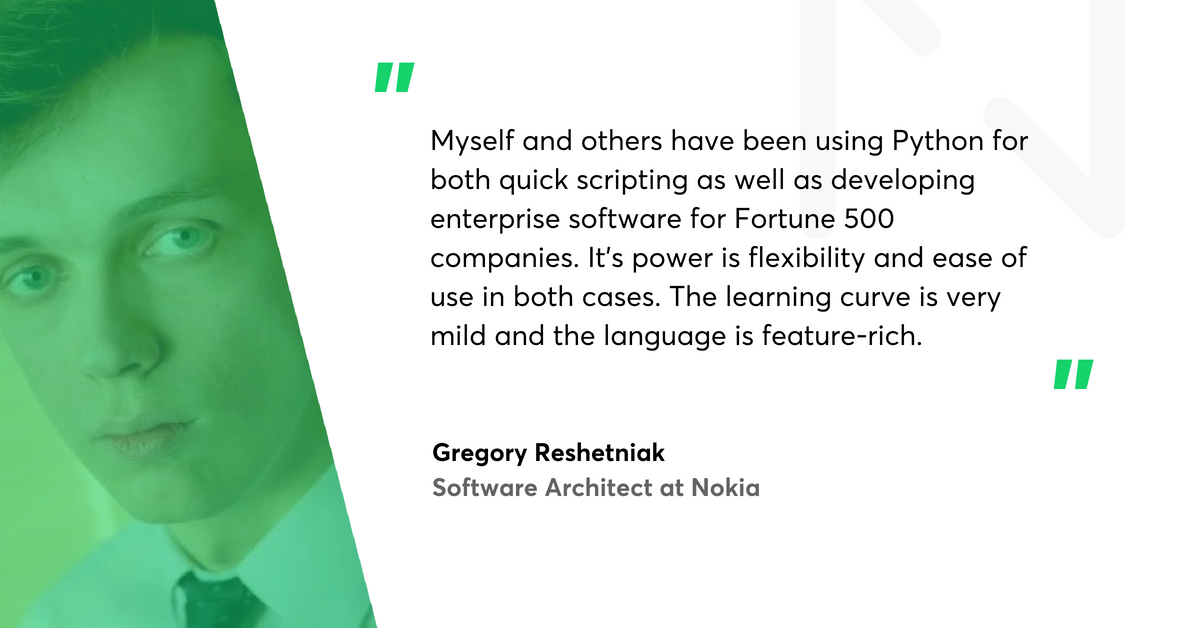 What are the advantages of using Python?

Here are some the most important advantages of Python:

Versatile, easy to use and fast to develop

Python focuses on code readability. The language is versatile, neat, easy to use and learn, readable, and well-structured.

Gregory Reshetniak, Software Architect at Nokia, says: - Myself and others have been using Python for both quick scripting as well as developing enterprise software for Fortune 500 companies. It’s power is flexibility and ease of use in both cases. The learning curve is very mild and the language is feature-rich. Python is dynamically typed, which makes it friendly and faster to develop with, providing REPL as well as notebook-like environments such as Jupyter. The latter is quickly becoming the de facto working environment for data scientists.

Due to Python’s flexibility, it’s easy to conduct exploratory data analysis - basically looking for needles in the haystack when you’re not sure what the needle is. Python allows you to take the best of different paradigms of programming. It’s object oriented, but also actively adopts functional programming features.

Open source with a vibrant community

You can download Python for free and writing code in a matter of minutes. Developing with Python is hassle-free.
What’s more, the Python programmers community is one of the best in the world - it’s very large and active. Some of the best IT minds in the world are contributing to both the language itself and its support forums.

Has all the libraries you can imagine

You can find a library for basically anything you could imagine: from web development, through game development, to machine learning.

Great for prototypes - You can do more with less code

As it was mentioned before, Python is easy to learn and fast to develop with. You can do more with less code, which means you can build prototypes and test out ideas much quicker in Python than in other languages. This means that using Python not only to saves a lot of time, but also reduce your company’s costs.

Another advantage of Python is that this programming language can increase productivity. Its integration features and control capabilities can enhance the productivity of applications. In comparison to other languages, Python is more productive than Java because it is dynamically typed and more concise.

The main disadvantages of Python

Experienced programmers always recommend to use the right tools for the project. It’s good to know not only Python’s advantages, but also its disadvantages.

What problems can you face by choosing this programming language?

Python is an interpreted language, so you may find that it is slower than some other popular languages. But if speed is not the most important consideration for your project, then Python will serve you just fine.

Threading is not really good in Python due to the Global Interpreter Lock (GIL). GIL is simply a mutex that allows only one thread to execute at a time. As a result, multi-threaded CPU-bound programs may be slower than single-threaded ones - says Mateusz Opala, Machine Learning Leader at Netguru. Luckily there’s a solution for this problem. - We need to implement multiprocessing programs instead of multithreaded ones. That's what we often do for data processing.

Not native to mobile environment

Python is not native to mobile environment and it is seen by some programmers as a weak language for mobile computing. Android and iOS don’t support Python as an official programming language.
Still, Python can be easily used for mobile purposes, but it requires some additional effort.

Gregory Reshetniak explains: - There are a number or libraries that provide a way to develop for both Android and iOS using Python. The most notable example would be the Kivy framework that allows using same the API to create apps not only mobile apps, but also software meant to run on Windows, Linux and Raspberry PI. That’s pretty unprecedented variety, and it’s dead easy to use too!

You should take into consideration that Python’s memory consumption is very high. For that reason, it might not be the best choice for memory intensive tasks. It might be problematic when a big number of objects are active in RAM.

Some programmers say that Python’s advantage - simplicity - is also its weak point. But is it really so?

Is Python a good language for your next project?

If you have not decided yet, here is a summary of pros and cons of Python that might help you take the final decision: