What Is Python? When and Why Should I Use It in My Project? A Guide for Entrepreneurs

The Python programming language is one of the most popular technologies among developers, the second most loved and the first most wanted.

Why? Because it fits modern software development perfectly. In this article, I'll tell you all you need to know about Python.

Python is renowned for being one of the universal software development technologies if you have a product with a set of functionalities in mind.

You can build any functionality very fast with Python. It's modular, so that you can integrate it with other services. It also has a significant and vibrant community that has created thousands of libraries.

If you want to build something with Python, it's very likely there are ready-to-use bricks of code waiting for your team.

First of all, it has nothing to do with snakes.

The origins of the language's name will give you some idea about its age - it is a tribute to Monty Python's Flying Circus, a legendary British comedy group from the 1970s. Python's creators in the late 1980s were great fans.

Python is a general programming language. It has a long history and recently its popularity is growing as it's a great fit for modern software development.

Python has some features that make it a universal tool, a Swiss knife for software developers..It is object-oriented and interpreted The objects are similar to real-world physical objects. They have their properties (the data stored inside) and behaviors (the actions they may take).

The objects can interact with each other. Python is also interpreted, which means the program can be executed directly, without compiling it. Python's interpreter can translate the program into other languages.

The technology is open source and has always been developed independently from any corporation. This is a feature that makes the Python community ethos special.

What is the connection between Python and Django?

You can do almost anything with Python.

Python is universal. Most of the time it's a great advantage, but in many situations a multipurpose tool can be problematic. In web development, you need well-cut bricks to build apps fast.

This is why you need a framework that will provide you with templates and create rules to adapt a universal language to a particular task. With these rules, it's much easier to build web applications as you get ready-to-use blocks you can construct with.

Frameworks are sets of rules that limit the possibilities a developer has when facing a problem she or he wants to solve using a programming language. These boundaries are useful as they also provide ready-to-use functionalities that can be modified later, instead of being built from scratch each time. Frameworks like Django make software development faster.

Django has a clean and pragmatic design. Most importantly, it has a vast library of components. Your developers don't need to waste time on building a basic view or a dashboard from scratch.

This is repetitive work they shouldn't perform. With a framework rich with features they can focus on the most critical tasks - writing the components that add value to your product.

The most wanted language by developers 2019

Python is definitely on the rise.

In the newest Stack Overflow Developers' Survey 2019 Python climbed once again, becoming the 4th most popular language globally with 42% of the respondents saying that they use it.

That's not all. At the same time, Python is the second "most loved" language (with 73% of the developers declaring this feeling) and number 1 in the "most wanted" category with 26% of the software engineers who don't use it saying that they would like to learn it.

Just take a look at the chart below to see the share of overall question views by Stack Overflow users for each technology. 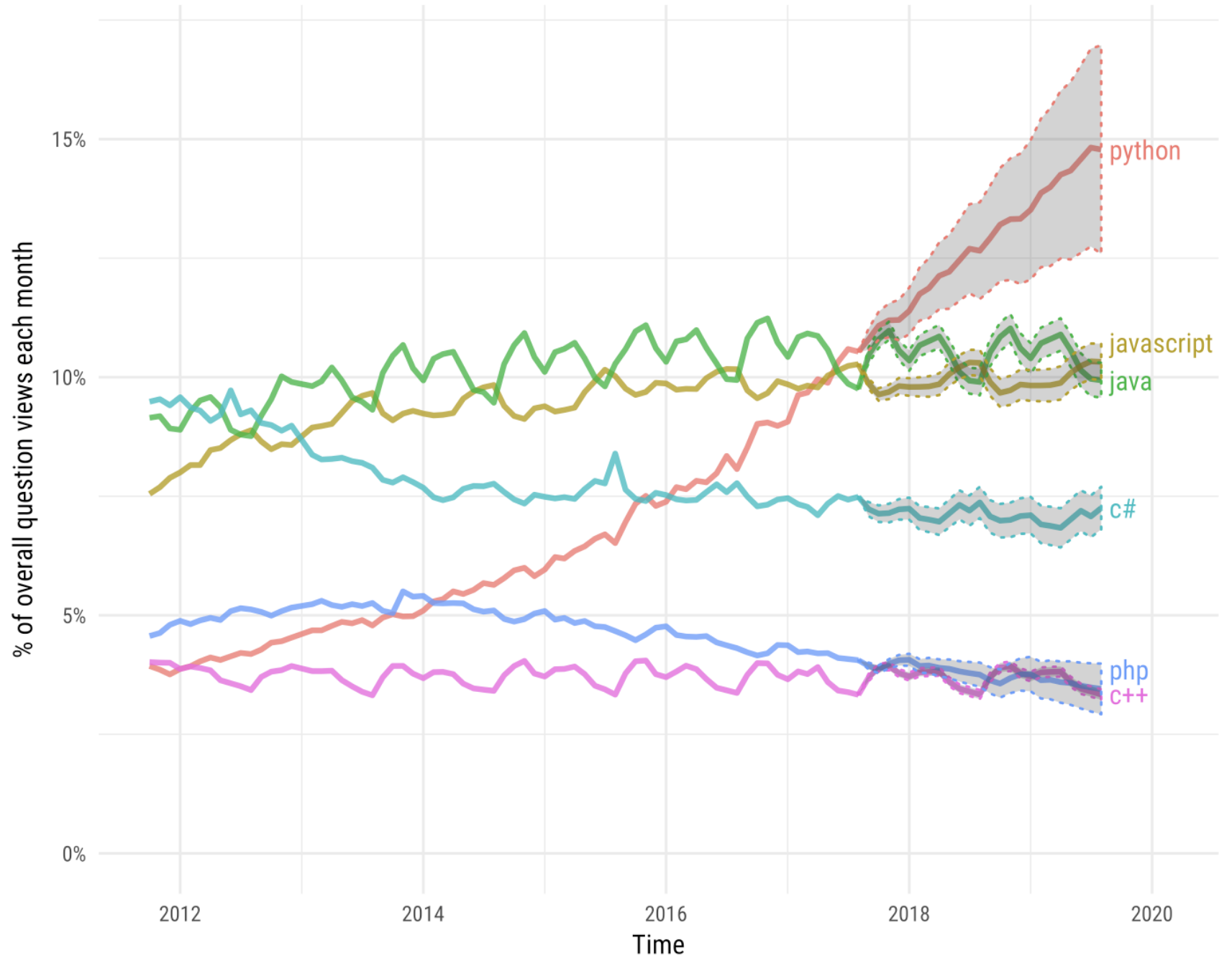 Many of the world’s most successful products were built with Python.

Google founders invented a simple development rule while building their search engine: use “Python where we can, C++ where we must.” It worked out well for them.

Python was also involved in the next biggest Silicon Valley success story as it was the third most popular language used to build Facebook (just behind C++ and PHP).

In 2016, the Instagram engineering team boasted that they were running the world’s largest deployment of the Django web framework, which is written entirely in Python.

While Reddit was originally written in Lisp, in 2005 they decided to rewrite the whole platform to Python. The decision was due to a broader range of code libraries and more development flexibility.

If you want to learn more about how top companies use Python, take a look at this post about 8 Top Python App Examples.

The most important advantages of Python

Python is so popular among developers and product owners due to a list of very strong benefits you get when using it.

Python has many libraries and is also focused on recycling and reusing quality code.

Additionally, it has dynamic typing and dynamic binding - features that make it an excellent technology for Rapid Application Development (RAD), an approach used in agile software development, where the goal is to launch a functional Minimum Viable Product (MVP) as fast as possible and later make necessary improvements and changes based on real user and market feedback.

Python is also called a "glue language" since it is so easy to integrate it with other components. This is a characteristic that also fits the newest software development trends - modular programming, where you "patchwork" your product from all the best programming languages, frameworks, and external services available.

3. Numerous modules and packages ready to use

Python modules and packages can be used in any configuration - they can be added, removed, replaced or modified. There's a lot of room to experiment. Over time, the standard library has been overgrown by packages created by the community.

They say there's a Python package for everything. That's possible, since there are more than 147,000 packages in the package repository.

Python's interpreter, that is the program that executes the commands, makes it all much more comfortable. The interpreter doesn't need any compilation, which makes the standard programming cycle (editing, testing, and debugging) run very smooth.

Fast iterations are crucial for RAD. What's more, a bug or corrupt input does not trigger a segmentation fault. When they are discovered, the interpreter creates an exception.

Overall Python provides excellent productivity, which may be the main reason why the language is gaining popularity so fast. Engineers like to get things done quickly.

Python has a simple syntax, which makes it easy to write, read, and learn. Some say Python needs no documentation as you can read a well-written code and understand it without any additional comments.

What Python can do for your business?

There's no big surprise that what best software engineers love should also have excellent business potential. Python is widely used by startups as well as in enterprise software development, data science projects, machine learning (here are some more ML examples). It became especially popular among fintech companies, probably due to its great handling of big data as well as a wide range of blockchain related libraries.

Here are some of the areas where Python beats the competition:

As I mentioned above, it is very universal. You can build whole apps in Python, or just some modules which you can bind easily with other technologies.

Build control, automated and continuous compilation and testing, project management, and bug-tracking - these are all very useful for software developers.

Django makes it a powerful tool for fast and stable web development.

The Python programming language is currently fueling scientific programming. It all started with the release of Python numerical computation engines such as NumPy and SciPy. Slowly but surely, Python began to take over as the preferred language for computer science research.

Python has  a massive collection of libraries already available to quickly jump in.

Software for enterprises often needs to integrate with legacy systems, such as existing databases and non-web applications. Python can integrate with other languages very easily and always keeps high security standards.

Python is simple; it lowers costs by cutting the time-to-market for your products.

It has a simple syntax which makes remote collaboration easier. Open-source libraries that also include precious solutions for the financial sector create even more business opportunities.

Finally, Python is by nature a secure technology, which makes it an excellent choice for financial applications or applications dealing with sensitive private data (such as healthcare). 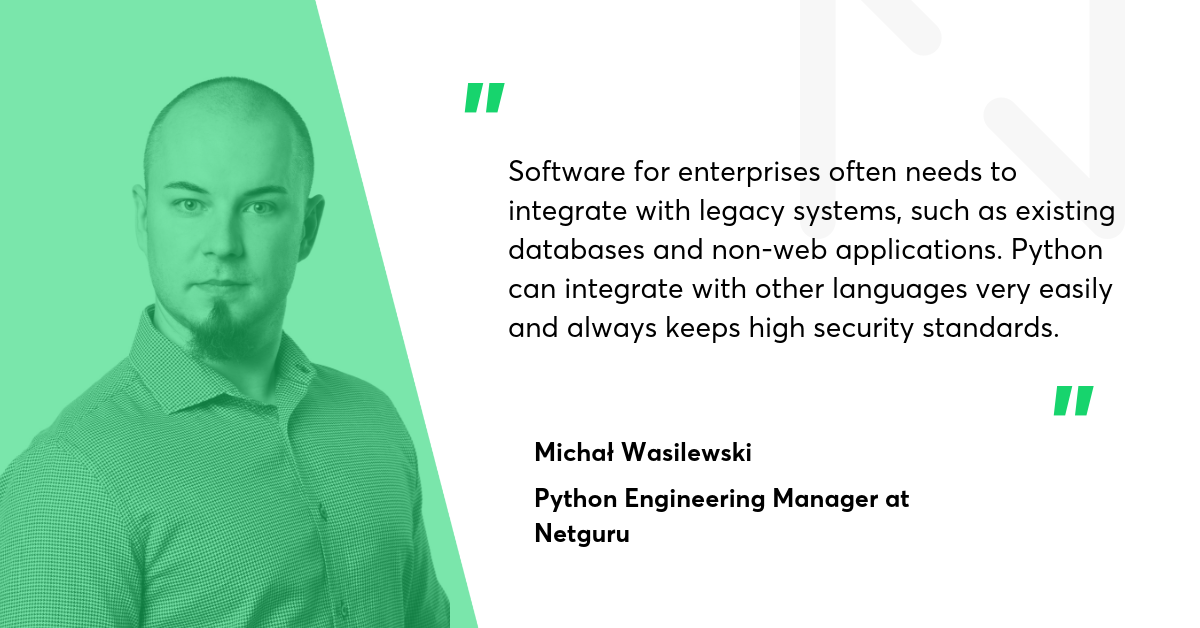 Python software development - how we do it at Netguru

We have used Python to deliver some outstanding products for our clients. Here are some examples.

Python is an excellent technology for machine learning.

For one of our clients we built a tool that uses AI for prospecting, chats, and scheduling. As an MVP we created a Chrome extension that performed all the complex optimization tasks. Thanks to Python we could build a functional MVP very quickly.

We created a system that is able to collect, store, and share medical documents. It supplements the other applications that Polish medical institutions use, regardless of the manufacturer. So far the system has been installed in over 40 hospitals in Poland!

Two experienced physicians had an idea for streamlining communication between patients and doctors. The goal was to build an MVP fast and make it possible for the founders to present it to potential investors to attract funding for further development. Python made it possible to prototype quickly.

With SwiftSwap you can make changes to your website without any help form software engineers. We created a scalable, secure, and fast solution with Python. With a handy dashboard, users can quickly turn off the script and control which service version will be visible to the end user.

Another healthcare system we built with Python allows patients and hospitals to identify and track assets. Implementing SILP solutions in hospitals is a way to improve patient safety and well-being.

Thanks to equipping patients with special wristbands, the SLIP locator can precisely track them within the hospital. SILP can also be utilized to monitor temperature and humidity, which is essential when it comes to sensitive medical equipment.

What is the future of Python?

When you choose a technology for your project, you want it to last. You don't want to get involved with a programming language nobody will use in two years. This definitely won’t happen to Python.

Python's popularity is growing as developers discover new uses for the universal tool. Enough talking. Take a look at another Stack Overflow graph. It shows the share of each technology in the Stack Overflow questions posted each month.

Python is on the rise

If you'd like to do some research on your own, we recommend you to follow some of the best Python specialists and personalities such as Guido van Rossum, Armin Ronacher, Marc-Andre Lemberg, Tim Peters, and others.

If you want to quickly develop a digital product in any industry, you should consider Python as one of the languages to use.

If you'd like to discuss your product in detail or have any questions, contact us and some of Netguru's best Python experts will lend you a hand.
Get in touch with us or estimate project. 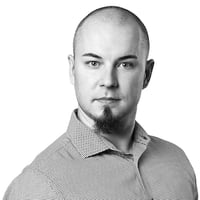 READ ALSO FROM Python
Read also
From Dreams of Game Development to Building Enterprise Web Apps As a Senior Python Developer
7 Reasons Why Python is Perfect for Startups (Update)
Is It Worth Creating a CMS in Python?
Need a successful project?
Estimate project or contact us
Menu
Technology
Services