Not because he was well-trained in the real estate industry, but the opposite.

He knew nothing about real estate.

Keller Williams wanted to disrupt the real estate market and they wanted to understand the tech space at a deeper level. In order to do so, they needed someone with a different way of thinking.

Someone who was thinking beyond the real estate box.

However, when Keller Williams reached out to Pavlovic eight years ago, he was very upfront about his limited knowledge in their space.

“You have the wrong guy,” Pavlovic said. “I don’t know anything about real estate, I know about tech.”

Bringing Pavlovic aboard was a bold move on their part, but you don’t become one of the largest real estate franchises in the world without taking a few risks.

Headquartered in Austin, Texas, and with over 160,000 agents across the globe, they wanted Pavlovic to play a crucial role in leading their firm into the digital age.

Adi would go on to become the Director of Innovation helping strategize and lead Keller Williams’ technological future since he joined the company in 2014.

Pavlovic recently sat down with Netguru to share his thoughts about how the real estate market changed last year, and how he sees Keller Williams disrupting the industry in the near future.

The pandemic was unpredictable, but so was the housing market.

Who could’ve foreseen that the housing market would boom during a global lockdown?

“It ended up being one of the strongest years in history,” Pavlovic says. “Which is fascinating because you had the Fed (America's central bank) have such a huge impact on mortgage rates that it made it really, really affordable to borrow. I think having to quarantine and work from home got a lot of people interested in buying real estate or moving out.”

“If 2020 has taught us anything, it’s that whatever you think is gonna happen, you’re wrong,” Pavlovic says.

In reality, last year was one of strongest years for the firm.

Pavlovic notes that many of their competitors expected the recession to be so bad that they had to furlough employees. By the summer those companies were rushing to re-hire individuals because the market did the opposite of what they expected. Thankfully, Keller Williams was able to avoid layoffs and even able to invest in technology and continue to build, without ever slowing down.

Despite all the bizarre changes that 2020 brought, Pavlovic believes that one of the best things of the year was the growing adoption of technology in the industry.

“We’ve seen a lot of agents get really, really creative and start to buy into the technology that’s been out there, but that they had been slow to adopt,” Pavlovic says.

That previous reluctance is starting to shift.

The pandemic is forcing agents and buyers alike to adapt to technology that they may have shunned in the past.

As demand for homes continues to rise, and with social distancing guidelines still in place, the trend of adoption is heading in the right direction.

However, it’s the holy grail of real estate tech that Pavlovic is eyeing for the near future.

According to Pavlovic, the U.S. real estate market historically sees about 5.5 million homes sold every year.

That was prior to the pandemic.

On top of that, if people are still required to work remotely, many will want to move out of the city.

What does this mean for real estate?

In short, it means that the real estate market is set to stay hot for the foreseeable future.

People are looking to migrate to affordable places where their dollar will stretch further. No longer do they desire expensive cities, where the culture and energetic lifestyle that a metro area provides were once the allure.

Now they want to move into the suburbs and smaller towns where they’ll have more space as they continue to socialize at a distance. It’s basic economics, according to Pavlovic.

However, it’s also wise to not get too far ahead of yourself and assume that these forecasts will come to fruition.

Pavlovic notes that it’s hard to gauge how many people who claim that will eventually move out of the city are actually just “window shopping”.

Nevertheless, if the studies are right, the real estate industry needs to evolve, innovate, and help make the selling and purchasing experiences more efficient.

This is something that Pavlovic and Keller Williams have been working on for quite some time. In fact, Pavlovic is still taken back to his early days of gathering feedback from their agents.

The common topic for discussion would be: “If we could build one thing today, what would it be?”

“The overwhelming majority kept telling me to build them a password reminder,” Pavlovic says. “Because they were using 8-12 different tools to manage their business. They kept forgetting their passwords and they wanted us to build a password reminder to help them because they didn’t really trust or like some of the ones on the market.”

As Pavlovic listened to their feedback, it dawned on him.

“You don’t need a password reminder,” Pavlovic says. “You just need one platform, with one login that allows you to access those 8-12 things you do.”

In essence, the feedback was the beginning of Keller Williams’ Command and Connect platforms.

Command is their proprietary platform that helps teams with everything from lead generation to database management, all in a single spot.

While Connect is their online portal and learning tool that is for all things connected to real estate education.

Pavlovic believes in 2021, it’s time to build bigger. He believes now more than ever, agents and consumers want a seamless experience when selling or buying a home.

He wants to go after the holy grail of real estate tech.

“Our vision is end-to-end transaction from search to home management, and everything in-between is on one platform,” Pavlovic says. “So it’s a perfect industry, where you can have third parties connect together to provide this experience, but you never leave the platform.” 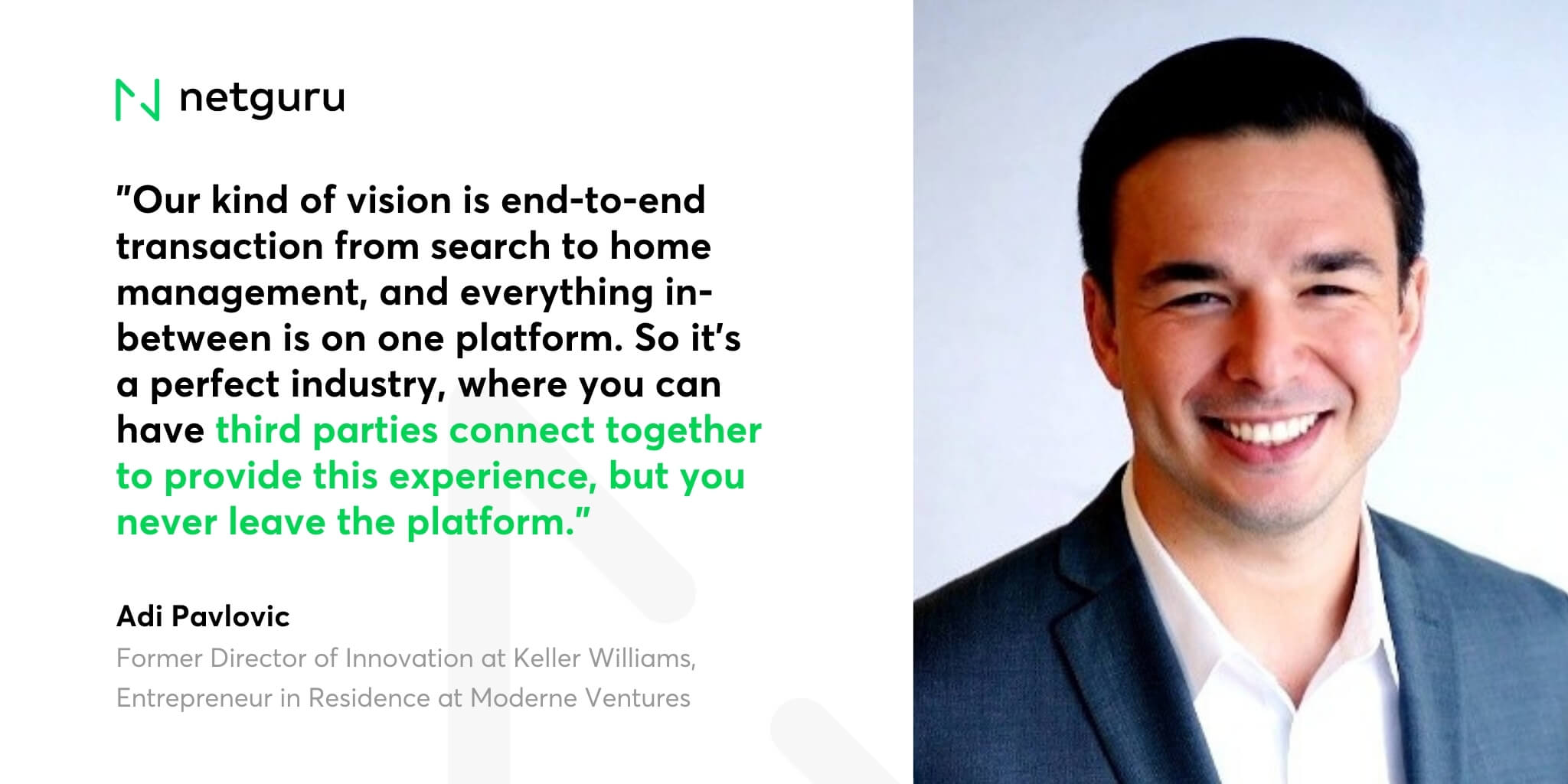 Building a seamless end-to-end transaction platform is what everyone covets. However, the even bigger question is who should build this platform?

Is it the lender or the title company? With so many different parts of the process, this is perhaps one of the biggest challenges, according to Pavlovic.

Challenges notwithstanding, it’s time to push forward while the iron is hot.

Even just six years ago, it was hard to get people to adopt new technology and processes.

Proptech may have hit a tipping point

Yet as stated before, one of 2020’s biggest “wins” was the increase in adopters.

As last year’s quarantine showed, there’s a lot that can be done online from the comfort of your own home. Since that time, when the government said they literally could not leave their own homes, people have come to expect the ability to do things remotely.

They’re ready to embrace the change.

“There’s no going backwards, right?” Pavlovic says. “We’re not gonna go and say, ‘digital closing was fun, but let’s go drive 45 minutes and meet in-person and wait for all the third parties to be there.’ I think that’s over. There’s no going back, right? There’s only going forward.”

Not only that, Pavlovic believes that people want notifications to manage their deals and to understand where they are in the process. Whether they’re in the search phase or in the final moments of closing, they want to stay informed every step of the way and have access to the information at their fingertips.

As for agents and brokers, Pavlovic wants to find ways to “empower them on the go” and help them accomplish tasks in micro-moments.

What exactly are micro-moments?

It’s those fractions of time where you’re waiting in line for coffee, or in your car, where you can be productive without much focus and energy in the 15 minutes you have to spare.

Despite the obstacles that have been overcome, and society’s willingness to adopt technology in the real estate space, Pavlovic understands that much is still out of the company’s control. He can only hope that if they build something great, the adopters will continue to come, and Keller Williams will truly change the industry.

“Making the transaction efficient is the best way we can have an impact on the experience, right?” he says. “I can’t make more people buy homes, because they need to be financially ready to do that, but what I can do is make the experience of buying and selling homes really easy.”

On top of that, Pavlovic understands that Keller Williams can’t disrupt the real estate industry alone. He understands that it’s going to take companies of all shapes and sizes to truly cause a shift in the way the industry works.

Until that moment comes, he has one bit of advice to share.

“You've just got to chip away at the mountain, one chip at a time,” Pavlovic says. “I’ve seen a lot of really good businesses built that way. So, my advice would be to continue chipping away at it. Don’t stop and look up and say the mountain’s too big. Don’t look up, just keep chipping.” 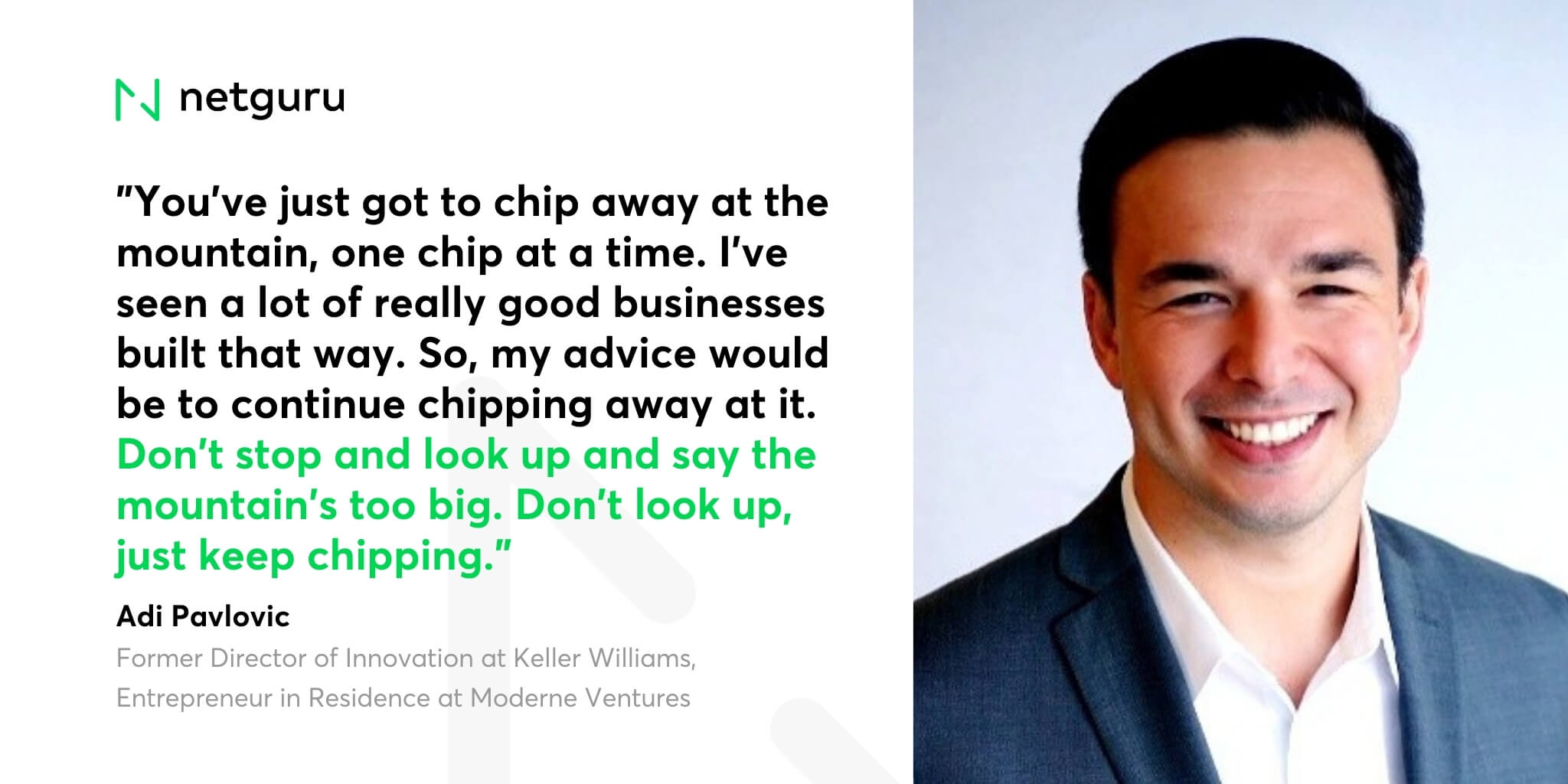