Angular has gained huge popularity in recent years, and with good reason. Let’s take a look at seven of the main benefits of Angular, and what they mean for your business.

Angular has been on quite a journey. First introduced by Google in 2009, this JavaScript-based framework for developing mobile and desktop web applications is now a far cry from its original incarnation. In 2016, Google completely rewrote and re-released Angular to keep up with the increasing demands of the web.
Angular has gained huge popularity among developers. In Stack Overflow’s 2019 Developer Survey, Angular was the second most-used web framework by professional developers, capturing 32.4 percent of the total.

Google continues to use Angular in a range of its own applications, such as Google Cloud Platform and AdWords. The platform has also been adopted by a host of big names, like Samsung, Delta Air Lines, BMW, and Forbes.

But the burning question is: should you use it to build your next digital product?

Let’s take a look at seven of the main benefits of Angular.

1. Functionality out of the box

The default setup of Angular gives you everything you need, right out of the box. This includes tools to take care of routing, so you can easily fetch the data you want to present in your application. Angular’s preconfigured environment not only helps with development, but also facilitates testing.

You won’t need to use any third-party libraries to create basic functionality for your app. All you need is the official library, which is provided by the Angular team. This means that you can expect better security and higher code quality.

Angular is built with TypeScript. The main advantage of this strongly typed language is that it helps developers to keep their code clean and understandable. Bugs are easier to spot and eliminate with the ability to see common errors as you type. This makes it quicker when it comes to debugging and also easier to maintain a large codebase – something which is particularly beneficial in large enterprise-scale projects.

TypeScript is a superset of JavaScript, which means we can do more with our code, for example by using interfaces and enums. Arguably, it also has better autocompletion, navigation, and refactoring services.

In contrast to React, Angular is a fully-fledged responsive web design framework. A key feature is that there is one suggested way to create a component, service, or module.

In practice, this has the effect of creating great consistency throughout the code base – an important goal to strive for – and avoids the situation of other developers wondering how on earth something was built.

To further enhance consistency, the Angular team developed a CLI tool that can be used to create certain repeatable blocks of code from the command line. Also, the framework’s documentation serves as an up-to-date reference for developers. 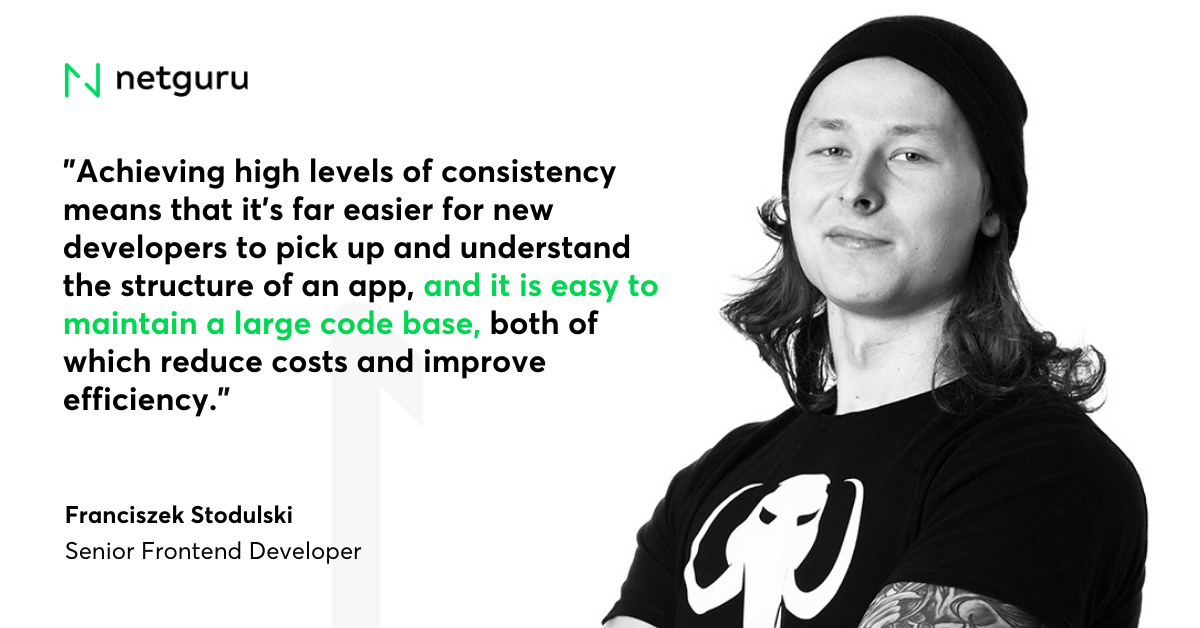 A welcome side effect of greater consistency is an improvement in productivity. Developers don’t need to spend valuable time trying to figure out what a function, utility, or component does, and once you have mastered how to write a component, writing another one is easy by following the same general guidelines and code structure.

The high readability of Angular code also makes it easy for new developers to slot into an ongoing project.

The type system allows developers to catch potential bugs earlier. Thanks to being integrated in IDEs such as VS Code and WebStorm, TypeScript incrementally recompiles and highlights errors as you type.

Each of these factors contributes to reducing development time and cost.

Angular supports superb code maintainability of code in several ways. Firstly, when moving up from one major version to another, all Angular-related packages are updated at the same time – this means that HTTP, Routing, and Angular Material are also included.

Updating is easy and can usually be achieved by using only one command, ‘ng update’. This means that you don’t spend time worrying if the new packages are supported, puzzle over which version you should use, or wonder when a particular open-source package will be updated to the latest version.

In addition, components can be easily decoupled and replaced with improved implementations.

The modular nature of Angular means that developers can effectively divide code into modules. This allows for easy organization of app functionality and the creation of reusable chunks of code which can vastly reduce development time and cost. The Angular community further supports this with a variety of ready-made components

Modules also make it possible to efficiently divide development work across teams while ensuring that code stays clean and organized as well as allowing the application to be scaled seamlessly.

Angular Material is a collection of ready-to-use, well-tested UI components and modules that follow Google’s Material Design principles. It contains a range of UI components, such as navigation patterns, form controls, buttons, and indicators. Components are adapted to suit various browsers, well-documented, and written based on the latest guidelines.

Developed by the Angular community, these modules simplify the design workflow for teams, allowing developers to add new elements and develop applications rapidly with minimal impact on performance.

Angular is highly usable straight out of the box and comes with a range of features that allow developers to achieve a high speed to market.

Its ecosystem is vast, with tons of ready-made components that make scaling a project easy, as well as making it a great choice for enterprise-scale applications. What’s more, TypeScript reduces the burden of debugging, with most common errors being flagged during development.

Selecting the right tools for your project is critical, and although the choice of web frameworks is huge, it’s easy to see why so many developers and companies are choosing Angular. 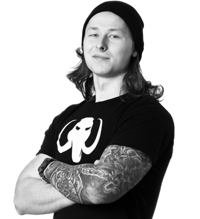 READ ALSO FROM Angular
Read also
What Apps Can I Build With Angular? A Short Guide for Entrepreneurs and Managers
8 Examples of Highly-Successful Angular Apps Many of Us Use Daily
State of Stack Report: Typescript Will Be a Big Thing Because of Angular 2
Need a successful project?
Estimate project or contact us