It all started with Silicon Alley. It may sound a little dated now, but back in the 1990s tech companies around the Flatiron District in Manhattan were popping up weekly, and it was becoming quite a tech hub.

So it was dubbed Silicon Alley, a spinoff of California’s Silicon Valley. A lot has changed since then. Mainly that Silicon Alley has expanded to the rest of the city! With thousands of startups being funded each year now, there needs to be infrastructure to support these efforts.

That is where coworking spaces come in.

With these handy spaces, most tech startups can work in person with a team, scale up the team quickly, and they don’t have to be tied down by any long term lease. Showing that the city is adapting to the growing tech scene, dozens of coworking spaces have popped up in NYC in the last decade. Here’s a list of some of the ones we’ve been noticing here at Netguru.

There’s something special about having a coworking space built just for you. What do I mean by that? I mean that people love products that speak to them—that are targeted to them. This has been done well in software, but it hasn’t been replicated very well in the real estate market, until now!

This is where The Wing differentiates itself from other coworking companies. It is a coworking space for only women! The Wing is one of the companies pioneering its space, and New York is lucky to be housing it.

The Wing boasts a thriving community that can be accessed in a few different ways. You can attend one of the many events at The Wing or plug into their online social network while you’re on the go. This is one of the core elements of The Wing.

Connecting with other women in and out of the workspace is crucial. The Wing makes it simple.

Also, did I mention that The Wing has a camp? This is a retreat for The Wing members to bond with one another over a campfire, roasting smores.

Rates: The Wing membership prices range from $185 to $300 depending on your location, and they have annual plans as well as monthly ones. 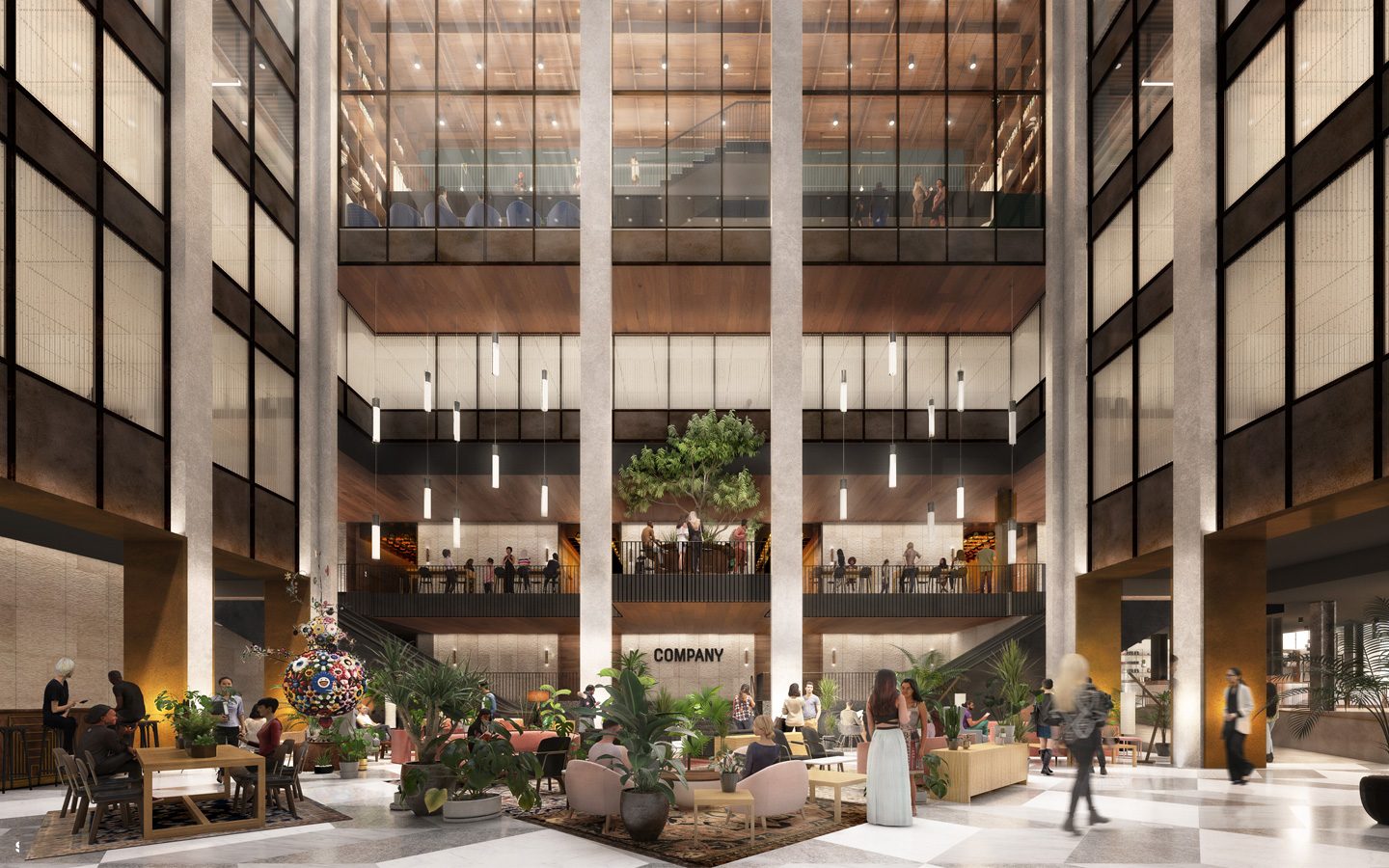 Company works with startups all the way up to enterprise-sized companies. Company was trying to create the vibe of walking into a hotel upon entrance, which worked out pretty well for them. This coworking space also comes with its own tenant app to help anyone manage their membership.

We would be remiss to not mention that Company has one of the best places for a NYC-based founder to find themselves in. According to its website, “Company is the first of its kind — seamless integration of technology, hospitality, and purpose-built space”. They have tons of programs to help founders get connected to the right people and get them to the next level on their entrepreneurial journey

Some of their programs include an accelerator called Grand Central Tech, Founder-in-Residence, Expert-in-Residence, and several more. They also have resources to help founders through their venture development program for founders who have passed a certain stage. 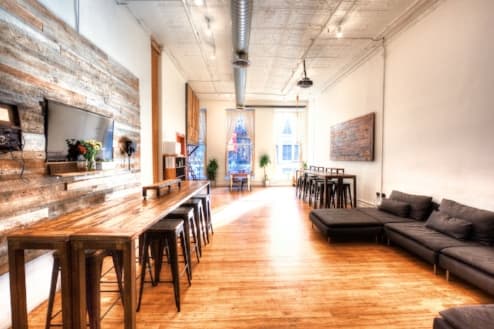 Have you ever wanted to work on a Farm? You know, in the plains of America, a building painted red with a big barn door? Well, you’re in luck, because now you get the chance to do that even in Manhattan. The SoFarm is a coworking space in NYC that is an actual farm that its founders built by hand. They were aiming for a natural and comfortable feel. This is why The Farm is often described as one of the comfiest coworking spaces in the city.

A big benefit of the Farm is that it’s also an event venue where you can host conferences, meetups, or gatherings. With access to the facility including the rooftop, The Farm ticks all the boxes for an incredible event venue. Even better, it’s pet-friendly! All members get $5,000 in AWS credits just for being a member, as The Farm is a partner with Amazon’s startup programs. What a deal! 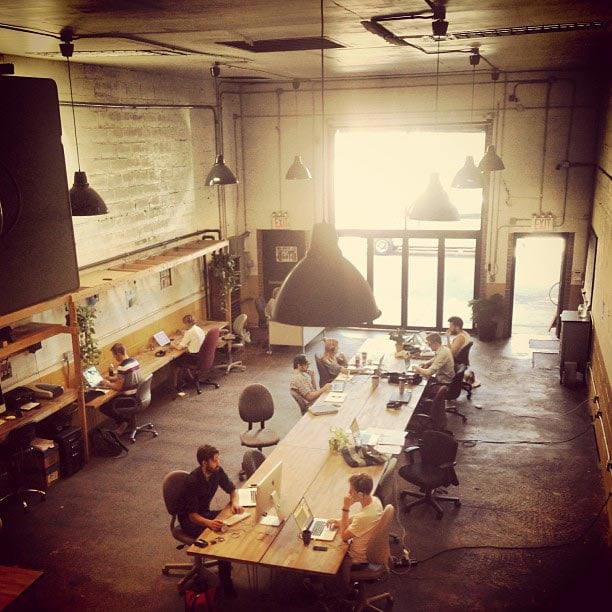 There are many coworking spaces in New York, and the ones we’ve listed so far are located mainly in Manhattan.

However, Brooklyn has a thriving tech scene and some great coworking spaces of its own—like the Bat Haus. This coworking space has a very manageable and flexible pricing scheme, so it can potentially work for many types of startups. They also have a virtual office option if you need an address but travel often as a digital nomad.

Another fun element of the Bat Haus is that they have regular programming for all members. Drink N’ Draw, as an example, is for all aspiring artists out there. They also have regular happy hours for those who like drinking and socializing. 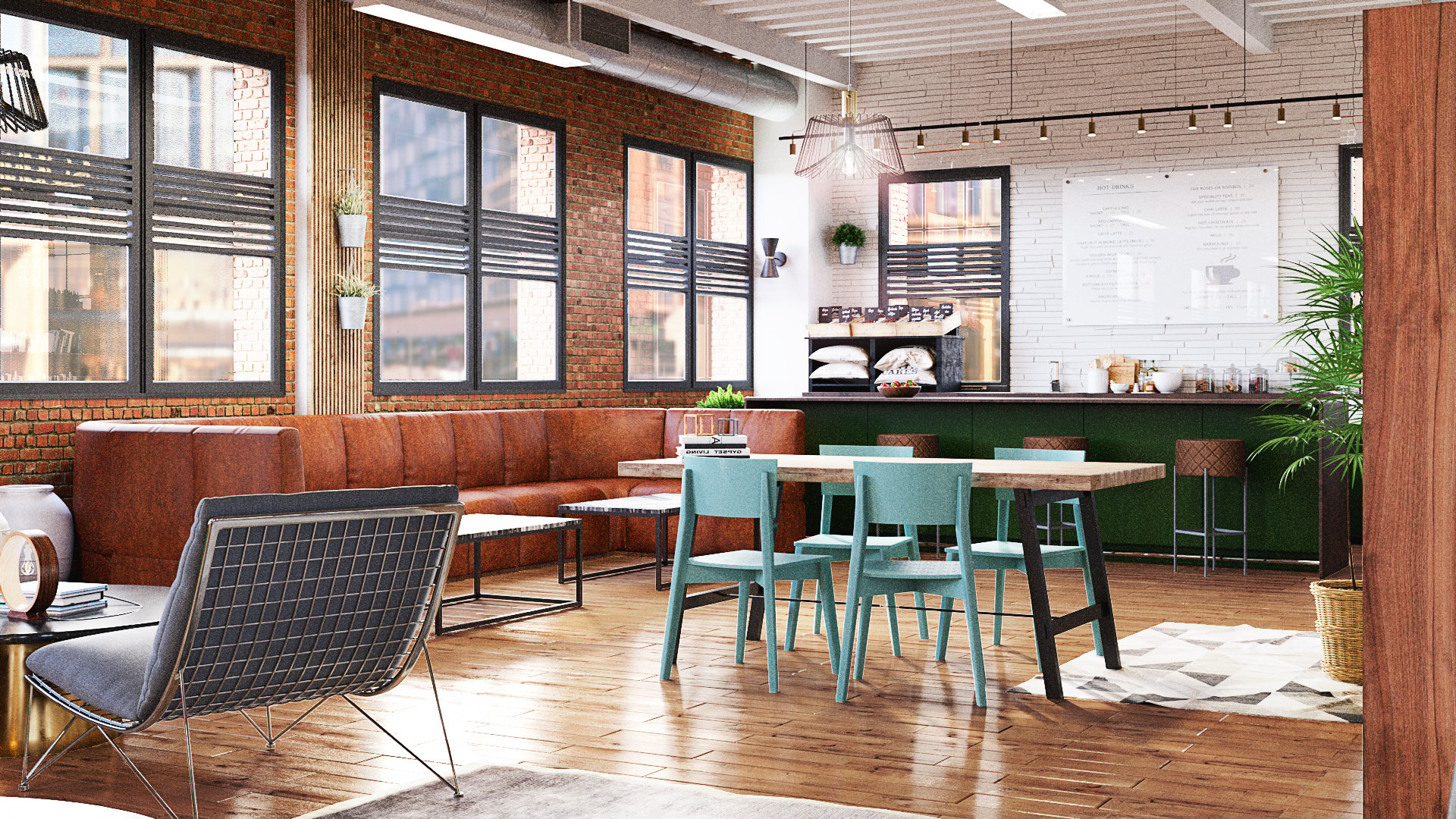 In New York, companies are being started by a diverse range of founders but there are not many coworking spaces that give these diverse founders a home.

Ethels’ club aims to change this.

Having just opened, Ethel's club is relatively new to town. Their aim is to be the “social club” for entrepreneurs of color. They have a coworking space and an online community. They are angling the space as a place for founders to build the world they want to live in and will support founders in starting companies as well.

The interesting thing about Ethel’s Club is that it’s not JUST a coworking space. People can also sign up just for a culture membership, which gives them access to the programming but not the workspace. This shows that Ethel's club is aiming to target a wide base of people who want to start companies, but also want to be in a like-minded community. 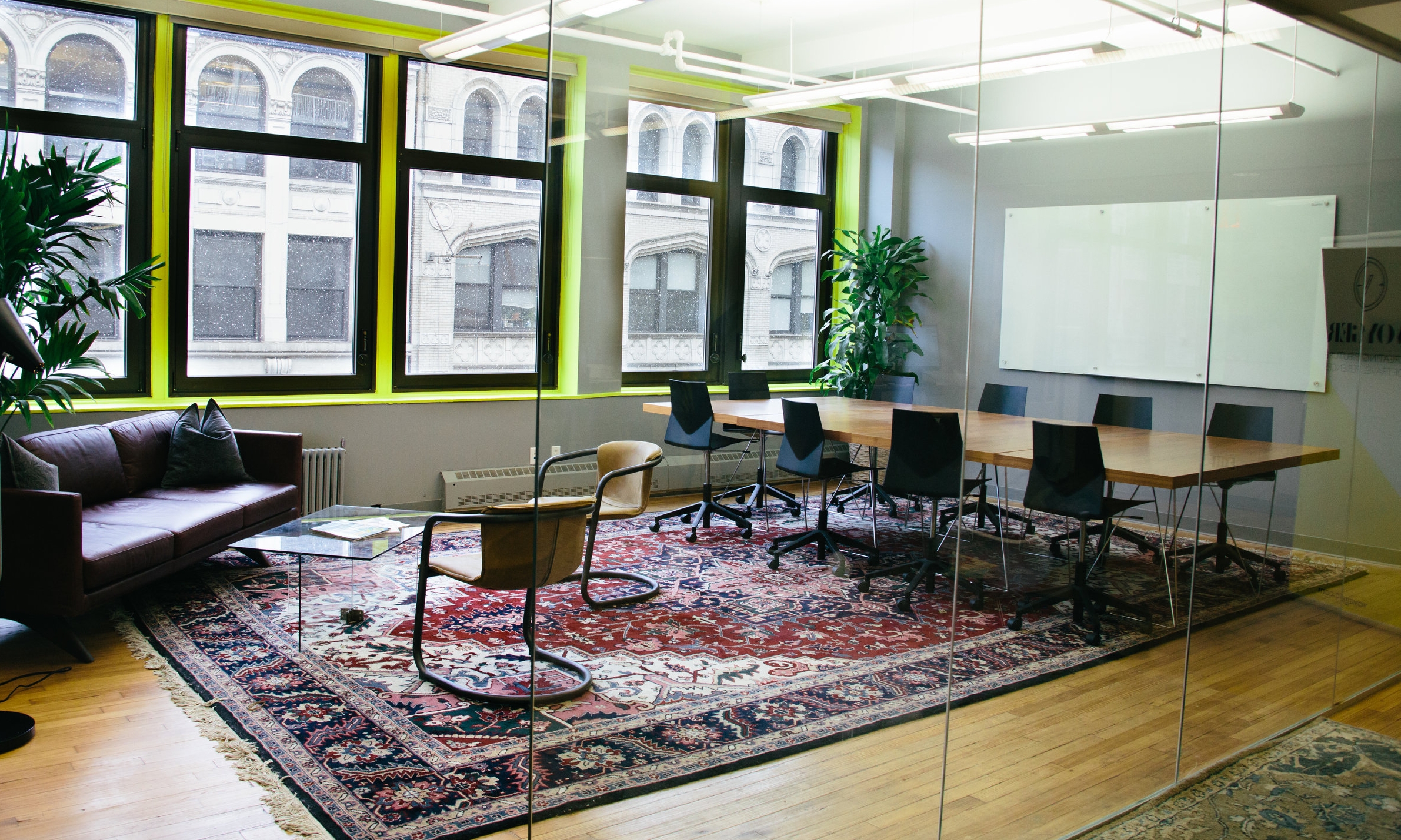 Many coworking spaces aim to attract any fledgling company that is in need of space and can pay for it. But there are also organizations that aim for specific industries and focus on their needs. VoyagerHQ can be a perfect example of that. This coworking space brands themselves as a “startup club” based in NYC, but the catch is that it VoyagerHQ only marketing itself to global travel, tourism, and hospitality companies. The club verbiage is aiming to separate VoyagerHQ from its competition even further.

Aside from its HQ on West 25th St. in NYC, where startups can work out of, it also enables startups to get in touch with potential industry partners and/or investors. These mentors range from execs at Lyft and large hotel chains, all the way to CEOs of companies in the hospitality and tourism industry. This is really a travel startup’s dreams come true, as it serves unique needs that these companies have. Some of the startups working out of VoyagerHQ are Bellhop, Goodwings, Marco, and more.

There are two options: a digital membership (free) and a Flex Clubhouse Membership. The flex membership is $25/day, which likely means the monthly membership is around $750 dollars a month. See the details here. 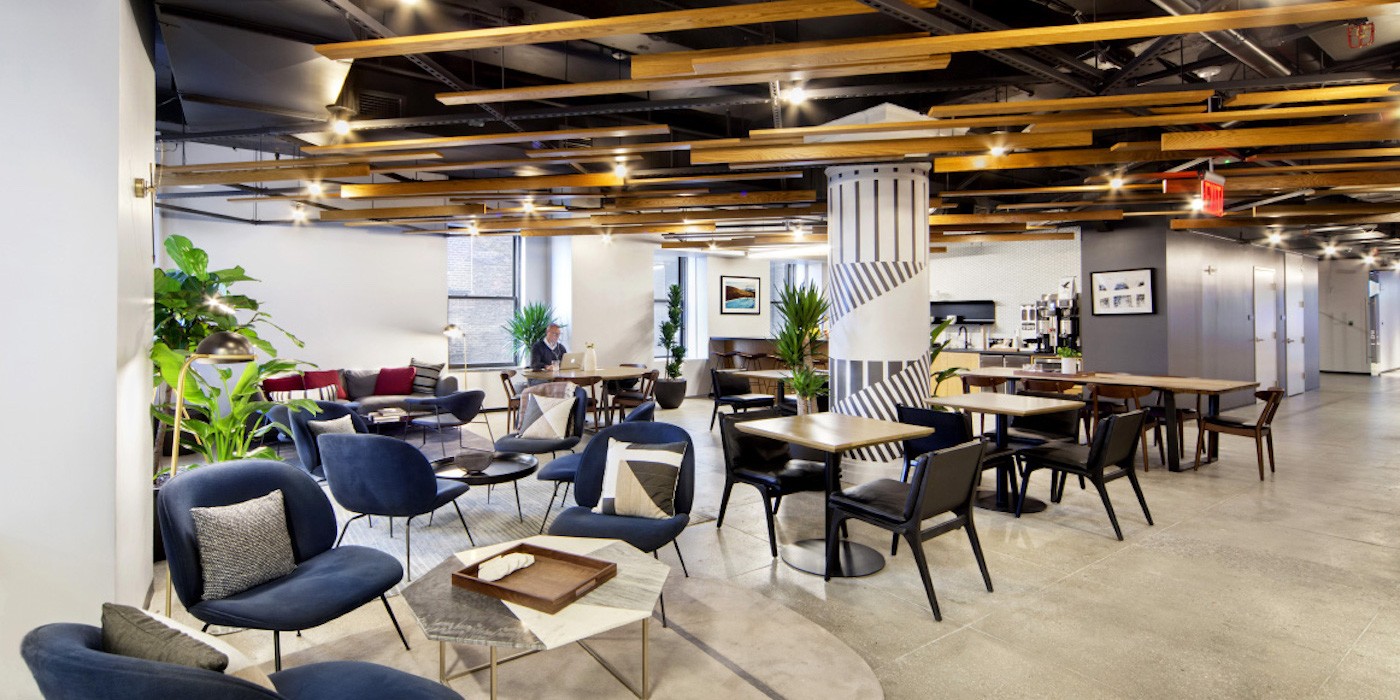 Industrious is very similar to WeWork in style, but they focus less on coworking and more on having a private office. Some would consider Industrious to be more upscale as well. With multiple locations in NYC, the company has built up quite a presence in the city, as well as around the country.

Industrious has locations in Manhattan and Brooklyn, so members can work all around the city without needing to find a different office vendor. Just like the others, Industrious doesn’t tie you into a long term lease, which makes it the perfect option for startups that are quickly growing their team.

There are other facilities in New York that aren’t traditional coworking spaces but still are hotbeds for innovation and technology. We’d be remiss to not mention them in this post.

Galvanize, based in New York, is primarily a coding school where thousands of students a year go through its program around the country and learn how to build complex web apps or learn data science.

Due to this, Galvanize attracts many technology founders and developers, which makes it a great place to hang around if you’re a startup founder or remote tech employee. And it has expanded into offering coworking space, with a fantastic community and industry experts on call. New York is one of Galvanize’s several locations around the country. 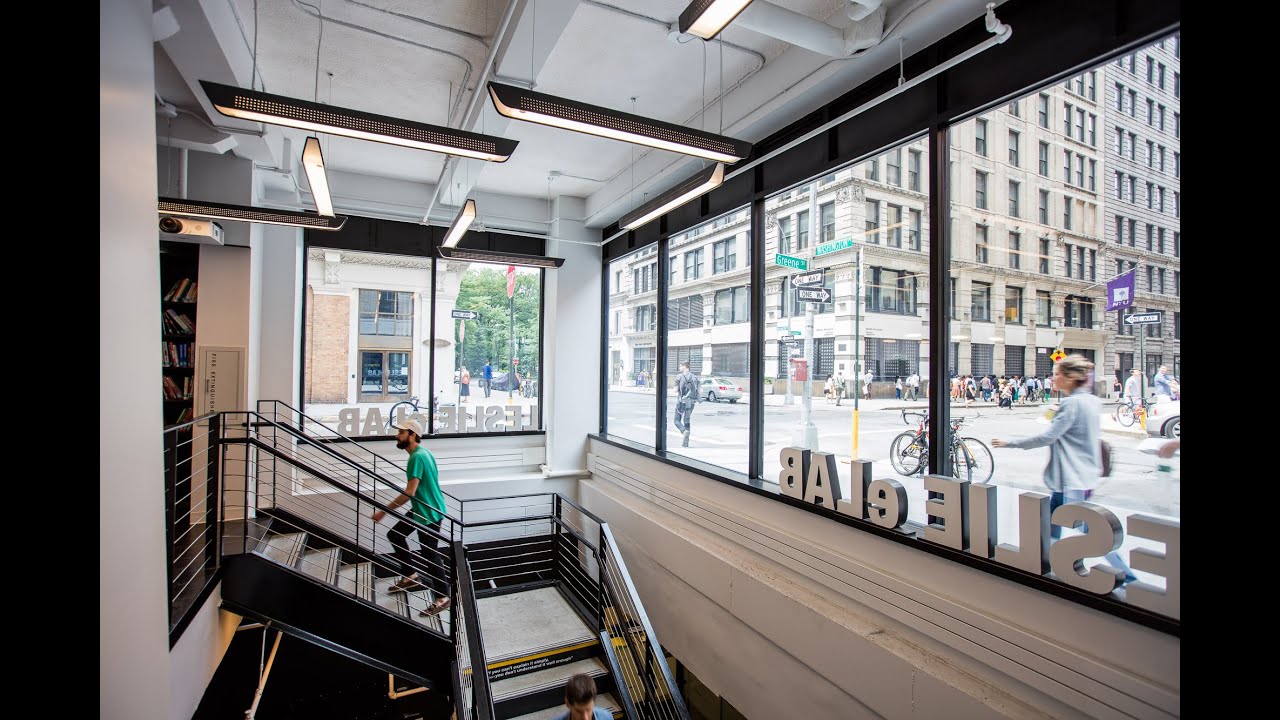 The eLab is one of the most popular spots for NYU students to meet, cofound startups, get mentorship, and scale their companies. Based near NYU’s campus, the eLab allows anyone affiliated with the NYU program to leverage their coworking space and programming spaces.

There is also a prototyping lab, which is very helpful to ventures working on hardware or physical products. The eLab is connected to the rest of NYU’s entrepreneurial ecosystem, which gives access to startup coaching as well as their infamous startup school program.

Famous NYU alumni include Robert Kalin (the founder of Etsy), Dennis Crowley (Founder of Foursquare), John Johnson (Buzzfeed) and tons others you can find here. 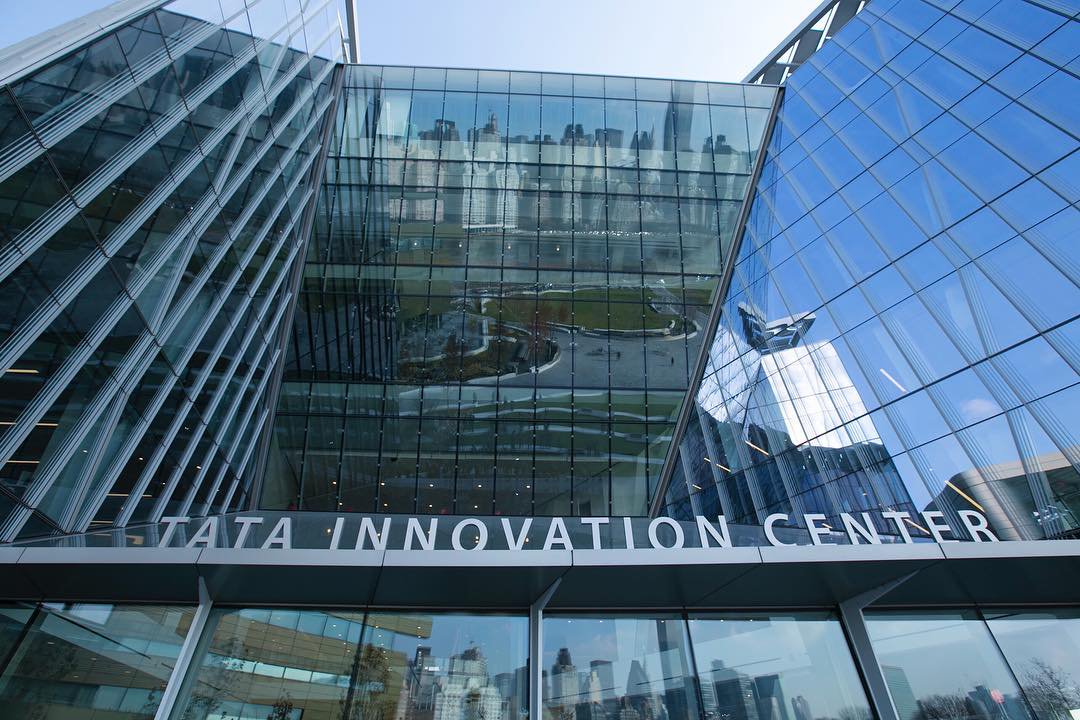 Located on Roosevelt Island, Cornell Tech oversees the Tata Innovation Center, which is where many startups get incubated and founded. Cornell Tech has a focus on tech in general.

Thanks to its location in NYC, which is one of the top cities in the country for startup growth, the Tata Innovation Center plays host to many of the sharpest minds on the East Coast—working on their own ideas or scaling a pre-existing business. Cornell believes that the fusing of education and entrepreneurship will bring prosperity to New York City.

A lot of of the great companies we know and love today started out in a garage.

In 40 years, we’ll likely be saying that the big companies of the era we live in now started in a coworking space. If you’re a startup based in New York, it’s clear that there are tons of options for you. Through universities and coworking spaces, any startup can find a flexible office that allows them to scale to a unicorn status and beyond!