JavaScript is taking the IT job market by storm, yet many aspiring software developers worry that learning the technology may not be the best way to land their dream job. They are not wrong to carefully consider their options, as other languages dominate particular niches on the market, such as Python in the case of data analytics.

What are the reasons to learn or polish your skills in Node.js, then?

Node.js is the most popular framework in the world

Stack Overflow ran a survey, which includes all kinds of useful information on IT industry trends. One thing they found out is that Node.js is the most widely used development framework in the world, while JavaScript has remained the most popular language for the fifth year in a row. These are not bad odds to bet your career on.

When you look at the changing popularity of development languages over time, you’ll be similarly reassured. Javascript, Node.js and Python are steadily moving up in the world, while languages like PHP and C# are slowly falling out of favour. Finally, JavaScript loses only to Python and takes second place on the ‘most wanted’ list for programming languages. Both of these languages are pulling far ahead of the competition. And in the case of most wanted frameworks, Node.js takes first place.

LinkedIn’s mobile app got an overhaul, with Node.js on their entire server-side mobile stack. They saw amazing capacity improvement. Other companies that chose Node.js include Netflix, Uber, and PayPal, and the list goes on. If you’re interested in working in a big, innovative and successful company, Node.js might be the way to go.

While it’s true that Node.js and JavaScript jobs are not the best paid ones at the moment (that tile goes to scarcer skills, such as Ruby on Rails), they might be the most exciting. Thanks to a multitude of frameworks based on Node.js, such as Meteor and Derby, the technology can be used for many different types of projects. If you’re worried about getting boxed in and getting stuck doing the exact same thing for years because of the technology you learn, Node.js basically solves your problem. 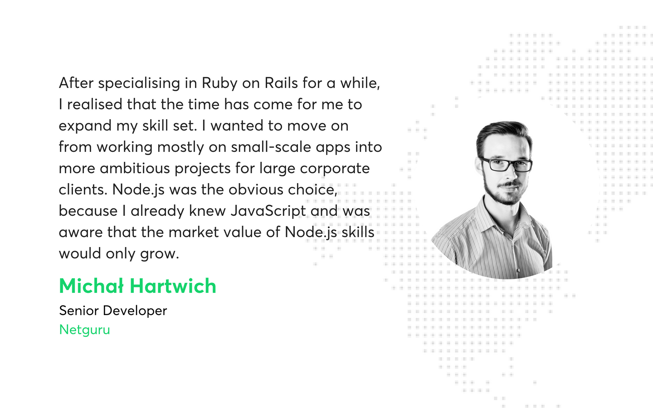 There Is No Shortage of Jobs for JavaScript Developers

While JavaScript scores high in all popularity and demand-based programming language ranking charts we’ve seen, it doesn’t always take first place. There were still more job postings for Java in 2017 (almost twice as many as for JavaScript!). Nonetheless, the number of jobs for Java developers is falling, while the number of openings for JavaScript and Python specialists is either going up or remaining at a steady high. Node.js is often listed as a worthwhile framework to learn, even for those developers who prefer to focus on the client side.

Looking at job listings can give you a falsely negative idea about the demand for Node.js developers. Research shows that many listings for SQL or Java developers also require skills in Javascript or Python. Node.js also ranks pretty high (fourth place) on the best paying development jobs ranking.

JavaScript, C, and Java are the three most in-demand programming skills, but only one among those three is on the rise. Can you guess which one?

Investing in JavaScript and Node.js programming skills is still a very good choice in 2020. The language is essential for web development, which is where a lot of the action is these days, and finding interesting job offers for Node.js developers isn’t difficult. Unless you’re interested in an old-school corporate job, going for Node.js might be the best option out there. Especially if you combine it with another popular framework, such as React or Vue.