9 Bootstrap Themes Worth Checking Out (+ where to find more)

As any self-respecting web designer or developer knows, Bootstrap has become one of the most popular frameworks on the net since it was introduced by Twitter back in 2011. It was envisaged as the answer to the problem of having multiple devs working on one site.

Since devs tend to work in their own way, often using techniques that are peculiar to them, it was seen to be the solution to the somewhat messy environment that this could create – one framework, for all to work from meant less in the way of ‘my way’s better than yours’ arguments and made for a more cohesive project all round.

Bootstrap is no longer associated with Twitter, but this has done nothing to dent its popularity. Its developers released the framework as an open source project on Github and before long 1000s of devs around the world had contributed to the code. It’s now “the most popular front-end framework for developing responsive, mobile first projects around the web”.

OK. What Is Bootstrap then?

Basically it’s a collection of web design elements that are pre-packaged in one tool. These can be customized by picking out the elements, which consist of HTML5, CSS3 and JavaScript, that you want. You can add JQuery plugins and the real beauty of it for the modern, mobile web, is that it’s completely responsive. It’s continuously being improved to give designers more elements to play with as well as better error reporting etc.

As you can imagine, with such a popular framework, there are a huge amount of themes to choose from, so with that in mind, let’s have a look at some of the best out there.

Firstly, it’s worth checking out the Bootswatch site, which has a variety of relatively basic themes which are all completely free (which is always nice, let’s face it). Above is the button layouts for the ‘Flatly’ theme and you can edit this, create your own theme around it or simply add the CSS file to your existing site. To customize (or create your own theme), you’ll need to have Git and Node installed before going on to download the repository which you can find here. Then, you’ll have to install dependencies: npm install, ensuring that you have grunt available in the command line. Full details can be found on the Bootswatch help section.

Do you or one of your clients run a site that demands you go retro? Perhaps a vintage ecommerce site or even a hobby site. Venera is probably the one for you then. You’re not limited to the one color as shown above, there’s a choice of two or if you’re pretty good with coding you can alter yourself anyway. This is a paid-for theme priced at $17, which is a one-use license for you or your client. Support looks great, there’s plenty of documentation and the site has a lot of great comments and transparent support questions.

3: Brave (Best Theme Ever – disclaimer, not my words!) 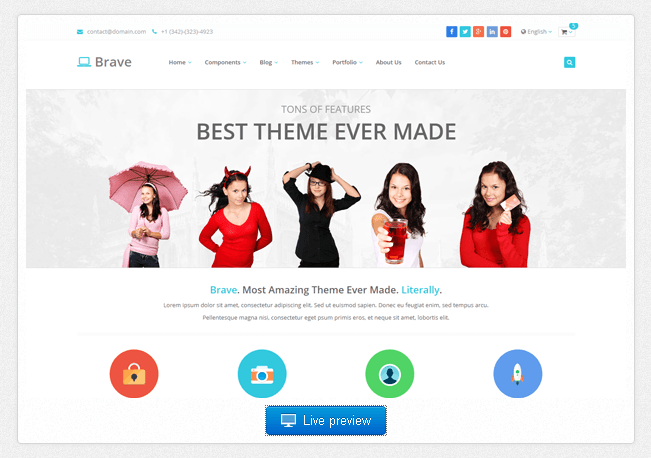 Confidently described by its developers as the ‘best theme ever made’, Brave does appear to live up to its name. With a whopping 280 features it seems to have something for everyone. This is echoed in the user comments on {wrap} bootstrap with many thanking the devs for its release and one user claiming to have purchased the extended license purely out of respect! It offers a variety of layouts and themes, such as ecommerce, medical, real estate, restaurant and non-profit, alongside a wealth of features and colors and really does appear to be an extremely versatile and powerful theme. If in doubt, check out the demo, I was seriously impressed. It’s a paid-for theme priced in the same fashion as the Metro Mania theme above. It’s certainly one that I will be looking to play around with much more in coming weeks. 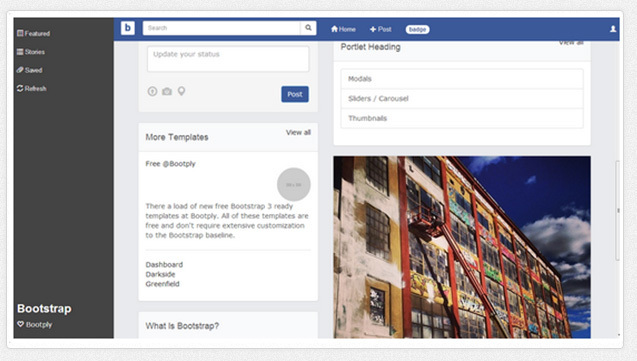 If you fancy yourself as the next Mark Zuckerberg but aren’t sure where to start then check out the free Facebook Bootstrap Template. Featuring a responsive, collapsible off-canvas sidebar, the template also boasts a navigation bar, search form, status post modal and content cards. The side bar is toggled with a chevron arrow and it slides back in from the left, taking up about a third of the screen when enabled. Even Zuck had to start somewhere… 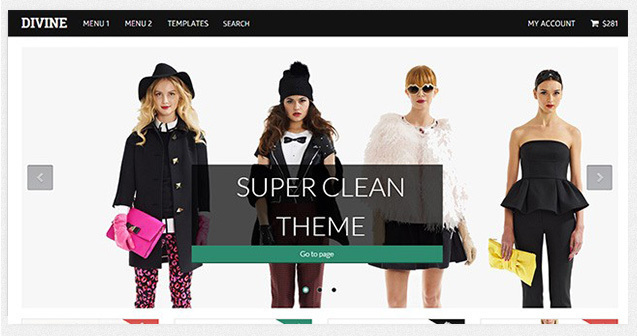 If you or a client is into ecommerce, especially one that wants to really showcase pretty products, then give Divine a try. It’s “uber-clean” and comes with a variety of page templates for home, categories, single products, shopping cart, user login and much more. Priced at $10 this is a highly visual theme which displays beautifully in demo mode and is ideal for fashion and lifestyle sites.

Artificial Reason is a responsive, customizable template perfect for a variety of projects and creating professional business sites. Again, it’s priced at $10, which is a special offer reduced from $12 as a new version is due to be released. It works with Node.js, Bower and Grunt (the latter is optional) and you can create custom templates quickly and easily too. It has numerous choices for customization, including UI elements, ecommerce, portfolio, pages and blog and is ideal for businesses such as digital agencies.

Shield is a one page theme ideal for creatives and freelancers which is, as you can see, retina ready and powered by Bootstrap 3. This elegant theme has templates that you would expect to find on an agency site, such as ‘services’, ‘meet the team’ and so on and is free to download and use. Personally, I think it’s one of the better-looking one-page themes that I’ve seen. Since so many of us have retina screens on one device or another, I also like themes that offer it. 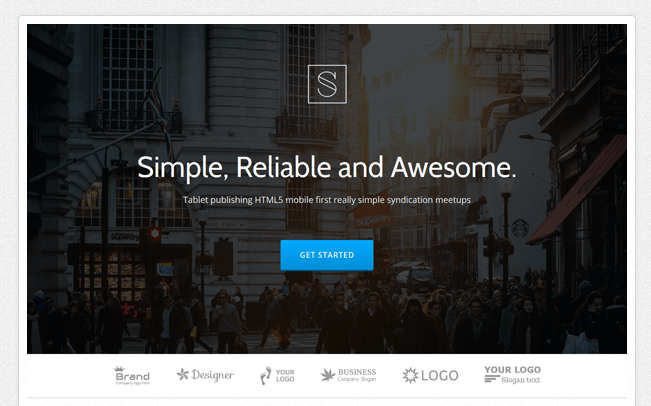 Looking to be the next big tech startup? Then you’re going to need a nice, simple landing page site with nice big clear calls to action and this is where Stamp will be useful. With a choice of 6 color schemes, backgrounds and home page styles, Stamp is, as it claims, simple yet pretty elegant. It costs $15 for a single user license and is ideal for sites designed for apps. Take it from Dropbox, simple works best when it comes to getting signups for your new app, whatever its form. 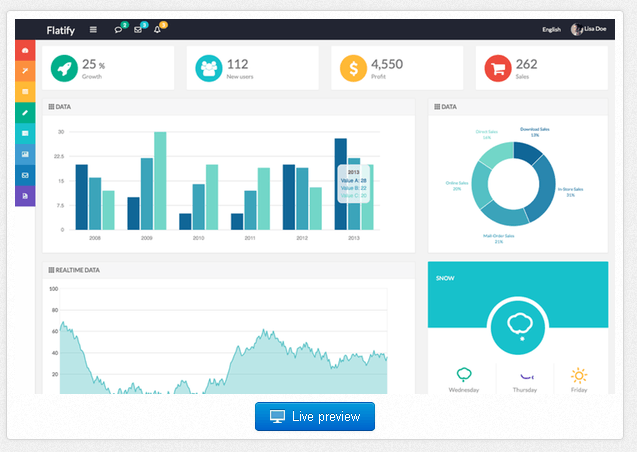 No round up would be complete without a template for an admin app and this one is very pretty indeed. Built with AngularJS and Bootstrap 3, Flatify uses Sass CSS so it’s simple to modify to suit your needs. It boasts internationalization and Localization support and you can add various languages such as English, Spanish, German, Chinese and much more. Flatify is cross browser compatible, allows for realtime form validation and multiple color support, although you can also add your own by changing a few variables. It costs $15 for a single use license and as usual there are purchasing options for using on multiple sites. You can build your web app using a variety of templates for tables, UI elements, grids and components.

There are numerous resources for finding great bootstrap themes online, such as Bootstrap Zero, {wrap} bootstrap, Start Bootstrap, ThemeForest and many more. When choosing a theme look for those with user comments (positive, preferably) and ensure that the theme developers offer support and regular updates. How many downloads the theme has attracted is also a fairly good measure of how good it is but do bear in mind that newer themes may be great but not out for long enough to have gained plenty of downloads. Ask around on the developer forums and you’ll find plenty of like-minded people who will be willing to discuss the best themes and resources out there too.

Bootstrap is a powerful framework that designers love. It provides a way for designers of all abilities to create beautiful websites without the headache of coding everything themselves. You can find themes from the most basic, such as the Flatly theme, to the all-singing and all-dancing theme that makes it easy to put together sophisticated sites such as ecommerce. Pricing is low for the majority of themes too, even the premium themes don’t cost the earth and if you’re experimenting there’s plenty out there that you can use for free too. I’ve included a variety of themes here in the hope of pleasing everyone, but of course there are a huge amount on the market and if you’re anything like me you can get lost in a theme site for hours playing with demos (hoping it’s not just me anyway!). If you think that there’s a super duper theme or template out there that I’ve missed out on, please do feel free to let us know in the comments section below.