How We Became an Integral Part of Property Detective's Success

Property Detective (PD) is a “big data” application that provides comprehensive information on the current and predictive quality of life in areas in which people consider living or investing. In 2016 Zoopla invested in PD and merged PD application with one of the biggest online property markets in Europe. Netguru is responsible for full stack software development from the beginning.

The London based Property Detective gives customers answers to important questions about the area they want to live: can I commute on a train to work? How high are the noise levels in the area? What kind of food is available at nearby grocery stores? What are the political demographics in this area? Are there plans for future development? And many answers to other questions.

The PD founders selected  RoR as the backend framework. As a startup platform, RoR is fast, low-cost, scalable, and flexible.  Further, it allows our developers to quickly develop and integrate new features with good quality code and standards. Our team is responsible for the development of the Ruby on Rails (RoR) engine PD and front end (the web application and website) since day one in 2014.

At the start of 2016, Property Detective started a strategic partnership with Zoopla Property Group, a leading online property market in the UK, with over 30 mln unique monthly visitors to its main website and a market capitalisation of over £1bn. In April 2016, we finalized the integration with Zoopla.

This project was highly challenging and proved once again that remote teams can work just as closely and efficiently as if they shared an office. We had to be ready to process huge amounts of data, present the information in an intuitive report, and serve over 30 mln monthly users.

The core of the PD application is collecting, analyzing and visualizing very large amounts of data. The algorithm takes into consideration: crime records, airports, election statistics, family friendliness, schools (31K+ in our database) motorway junctions, roads, motorways, town centre locations, water hardness, broadband availability, political data, lightpaths, environmental (noise and smell) inconveniences, retail and leisure opportunities, broadband speeds and much more. In total over 3 million data points and over 1,100k records need to be scoured to automatically generate a single customized 30-page report in seconds.
The application’s functional requirements are significantly different. For example, huge datasets need to be processed each time when an individual report is generated. On the other hand,  the document downloaded by a PD customer needs to be clear and comprehensive.

The integration with Zoopla was a significant challenge. We had to prepare  for a huge surge in traffic and to adjust the engine, so it could handle generating up to 150 concurrent reports. This had to be done without a minimum viable product (MVP) stage, which meant that the product had ready with all its features for the launch. We had just over three months to get it done.
The project was run by three remote teams with different cultures. Over the years we became familiar  with PD’s London headquarters, but we still needed to integrate with Zoopla’s workflow ( i.e. a workflow of a large and established corporation). As such we had to adapt to the bigger partner, who had the final word on the requirements.

One of the biggest technical challenges of Zoopla integration was working live with production servers and the code. To tackle this directly, we arranged a brainstorming session with PD in Poznan. The two teams came up with solutions to possible scenarios. They also adopted a stepped implementation strategy that would integrate our services with a fraction of the millions of Zoopla users at a time.
Brainstorming solutions not only generated many ideas, but also brought the people working on the project closer and the increased team spirit. This made everyone even more committed. 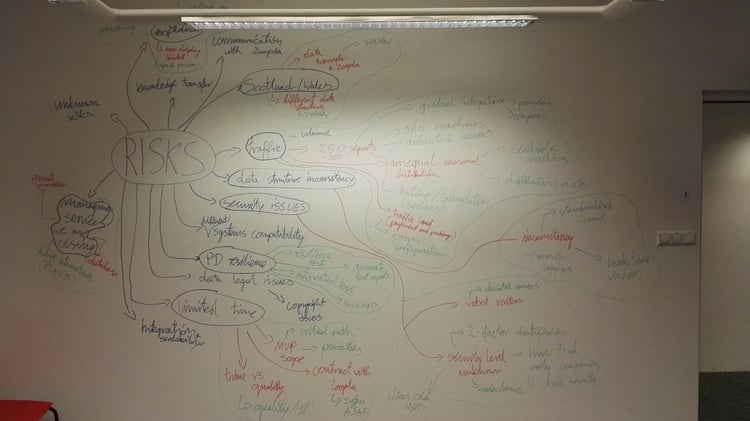 This also helped the Netguru and PD embrace working in remote teams. The people responsible for the business and design of PD work in London while the developers are in Poznan. The physical separation of these teams, however, has never been an issue. Each team member can communicate directly on live Slack channels, and share projects in Jira. If a meeting is needed, it is arranged on Google Hangouts.

On 26 April 2016, we released PD reports on the Zoopla property website, giving users the opportunity to buy an in-depth report on a location while they are looking at it online. We managed to work simultaneously with two London-based teams with different cultures. The service was launched after some time and user response has been positive. The companies’ co-operation proved to be mutually beneficial: PD managed to gain access to a huge sales channel, while Zoopla succeeded in getting a  competitive advantage over their rivals.

Netguru helped PD founders bring an innovative idea to life. Together we created a successful product with a big future potential. PD helps people make a rational decision when buying property. Anyone who has ever had to relocate knows how stressful the process can be, and how much there is to gain (or lose). Being a part of such this project brought lot of individual and corporate satisfaction.