The Brave New Watch OS 2: All you Need to Know

The launch of the Apple Watch, a few months ago, left many different impressions about Apple’s first wearable. From a developer’s perspective, WatchKit, the dedicated framework for Watch Apps, seems to be beautifully simple and small, though restricted - reminiscent of the rough early days of iOS development. Check out what's new in development for Apple Watch! 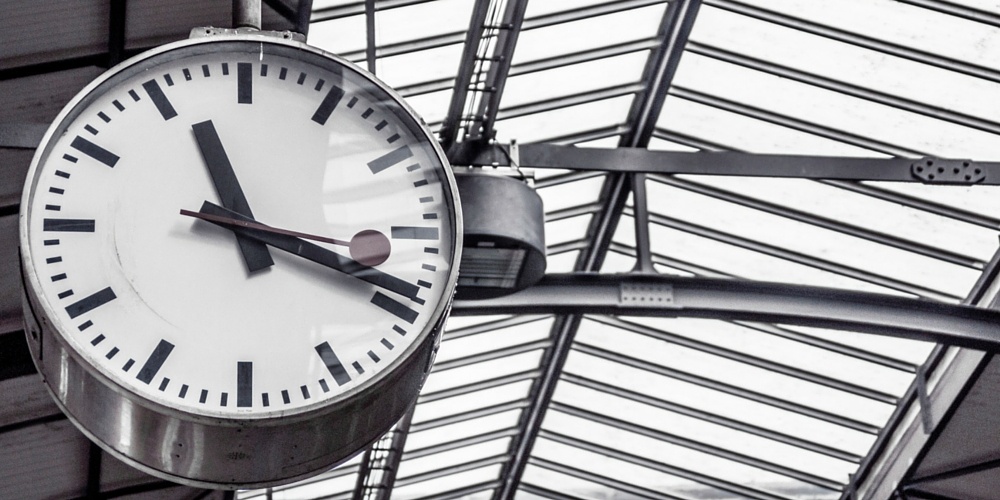 The launch of the Apple Watch, a few months ago, left many different impressions about Apple’s first wearable. Opinions vary from the extremely positive, focused on design, usability, intuitiveness and ease of checking email/messages, to more sceptical ones which hold that the Watch is just a gimmicky gadget designed to appeal to hardcore Apple fans. From a developer’s perspective, WatchKit, the dedicated framework for Watch Apps, seems to be beautifully simple and small, though restricted - reminiscent of the rough early days of iOS development.

During WWDC 2015 Apple announced Watch OS 2 - a new operating system for Apple Watch. The public release will take place on the 16th of September. It’s hard to predict how it will influence the small, but beautiful, niche market of wearables, but it will certainly bring a host of cool new features to the table.

The first version of Watch OS implies a high dependence between Apple Watch and its paired iPhone. Apps WatchKit extension was run on the iPhone and only refreshed the UI which was placed on Watch. This led to poor responsiveness and required having the iPhone nearby when using the Watch. Watch OS 2 changes this dramatically. WatchKit extensions are now placed on Watch, so they run faster, are more responsive and most importantly - Apple Watch app can work independently from iPhone. For example, if your watch is in reach of Wi-Fi, you can connect to the network using NSURLSession and download data, even if your iPhone is not present. 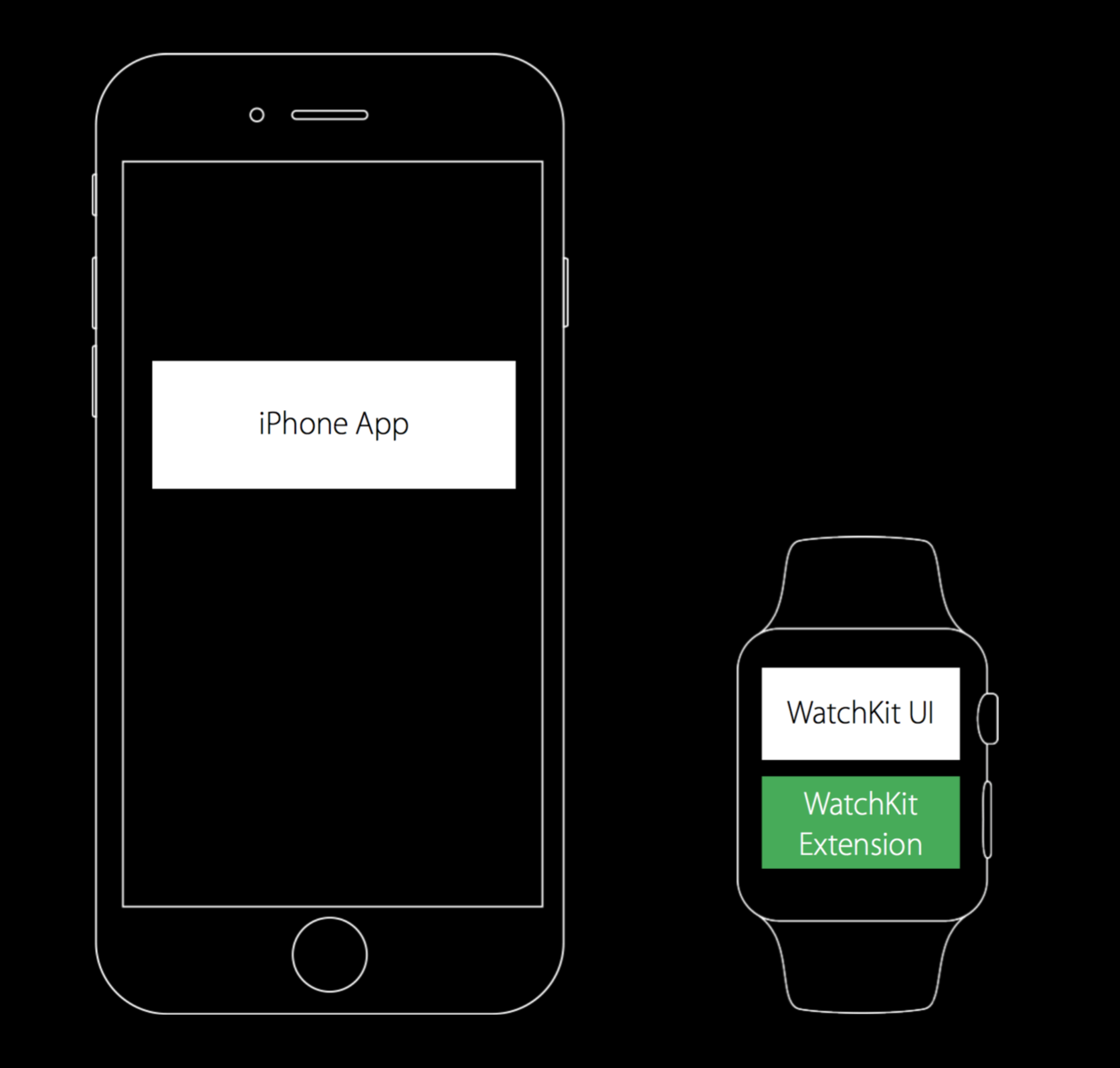 Watch OS 2 gives developers access to Apple Watch hardware features such as heart rate sensor, GPS, accelerometer, taptic engine, digital crown, microphone, speaker. This gives us new possibilities, but also new challenges, especially in terms of design. For example, consider how to implement an action like scrolling or changing volume. Should it be activated through gestures like sliding down or tapping? Or would using the digital crown be more intuitive? Or perhaps the two options could be used? The best design choice is certainly not obvious...

Let’s take a look closer at two of these hardware features.

The taptic engine taps the user’s wrist slightly when some event in an application happens. It gives information to the user without requiring them to look at the screen. Using the taptic engine for an application looks simple, but could be tricky. Might physical feedback be annoying for the user? It should be kept in mind that the Apple Watch is not an iPhone. It’s on the user’s wrist at all times, so it’s closer and more personal. The taptic engine should be used only for important events because too high a frequency could discourage the use of the app. What’s more, there are several styles of haptic feedback. It’s important to use associate one haptic style to a particular event and be consistent in that.

This hardware feature is inspired by traditional mechanical watches, but, of course, its function is totally different. The digital crown is an interaction mechanism for Watch applications. It can be used for things such as scrolling through lists.

It should be mentioned that Apple has introduced a new class - WKInterfacePicker. WKInterfacePicker instances show scrolling lists of text, images or both. The user can use the digital crown to interact with a picker.

Why use digital crown instead of gestures? Again, the Apple Watch is not an iPhone and its screen is much smaller. Using the digital crown is more precise, could be more intuitive and doesn’t overshadow UI elements.

The launch of Apple Watch’s new operating system means adjustments have been made to the WatchKit framework. Of course, some of the changes were because developers needed access to hardware features, but some of them are simply improvements on the previous Watch OS version. One of these improvements is Modal Alerts - let’s have a look.

Previously, if you wanted to add functionality to a Watch app similar to UIAlertController in iOS apps, you would need to push a new interface controller with proper information in labels and buttons for actions, or to present this controller modally. Now, in Watch OS 2 this issue is solved in a much friendlier way, similar to a solution from UIKit:

There are three styles of alert controller - Alert, SideBySideButtonsAlert and ActionSheet. 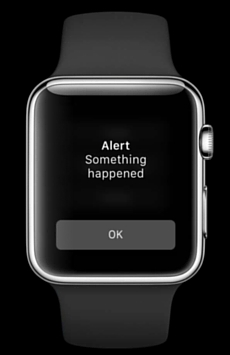 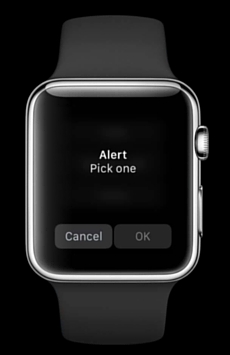 Perhaps adding the ability to present modal alerts doesn’t seem crucial, but it’s much more user- and developer-friendly than the previous solution.

There are two ways of transferring data in Apple Watch. First is good ol’ NSURLSession, which is well known and widely used in iOS for downloading data via HTTP. As mentioned before, with Watch OS 2, if your watch is in reach of Wi-Fi, you can connect to the network and download data, even if your iPhone is not present. 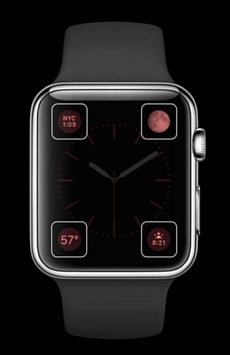 Complications are small elements that appear right on the watch face and provide quick access to frequently used data. Watch OS 2 makes it possible to create custom complications with a new framework - ClockKit. Although complications look simple and - ironically - uncomplicated, because of their usefulness they could be one of the most important features in Watch OS 2.

In Watch OS 2, a keychain is used to store the user’s sensitive data. This data is accessible when the device is unlocked (i.e. when it’s on a user’s wrist, and the correct password has been entered). When the user takes the watch off their wrist, the device is locked. This could be especially useful when sensitive data are presented in complications.

The introduction of Watch OS 2 gives developers more options and new possibilities: creating native apps, access to hardware features, changes and improvements in WatchKit, and last but not least - developing custom complications with the new framework - ClockKit. Although this blogpost doesn’t fully cover Watch OS 2, these insights show that Apple Watch is certainly a serious, independent and functional device.

Thanks for dropping by and reading the article, hope you found it useful! If you wish to receive such informative content monthly, straight to your inbox, sign up for iOS Brief! 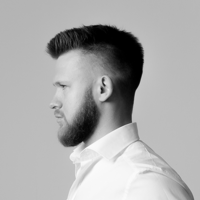